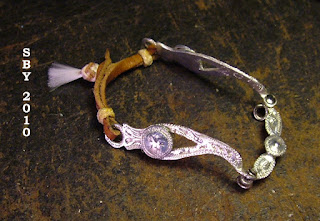 I wanted to review all the engraved silver bits I'd made since 2009, plus take a look at 3 unusual pairs I've added to my collection.  To my surprise, in the past 9 years I'd made 10 bits:  apparently they occur about once a year!  Even more surprising, the occurrence rate was very uneven.  From humble beginnings (well, sort of), there was an early huge blossoming of extraordinary engraving work -- cheek plates, conchos and buckles on bridles, an amazing breastcollar with 26 pieces of silver - and then things settled waa-aay down.  2015's bit wasn't even an original; it was just customizing somebody else's shanks.  I can only hope this random pattern is not engraved in stone!  oh bad pun...  I trust I can get back to making extraordinary bits and plates, should I want to.  (I do need more Argentium ... get it from Rio Grande.)

I began making my own bits in 1978, but it's not the purpose of this chapter to cover deep history.  Yikes!  Just looking at my scrapbooks reveals a whole 'nother post on reaching today's first bit!  Classic delay, mission creep, distraction and tangential zebras, not to mention okapis ... pause ...  OK, let's focus on the first of my 'engraved,' as distinct from 'made from scratch,' or even 'cut and stamped,' bits. 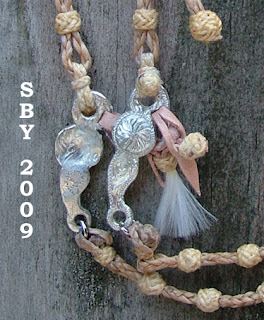 This bit was offered on a braided bridle as part of the NAN Auction in June of 2009.  The bridle had been offered earlier on Auction Barn, with a different bit; it didn't make reserve.  With the new bit, it sold to Sue Peet (thanks Sue!).  I had just gotten an engraving vise over Christmas of 2008.  This happened because I went to the Tucson Gem and Mineral Show, and because Rio Grande had what they called Catalog-in-Motion.  (I would've called it the traveling peddlar's show...)  The vise I got was the smallest, and cheapest, that the company carried.  Even so I bet they hardly imagined what it would be used for ...!  I had a steep learning curve to get to engraving such tiny pieces as mine, which involved Therma-Loc, the molding compound I used to hold them in place.  I've done blog posts on this process:  Bit Blanks,  Goehring Breastcollar Engraved.

Late in 2009, in November and December, there was an unprecedented outburst of creativity.  No less than the Emerald City Bridle appeared, (and a companion Sapphire Halter)!  These pieces were for Jackie Arns Rossi. 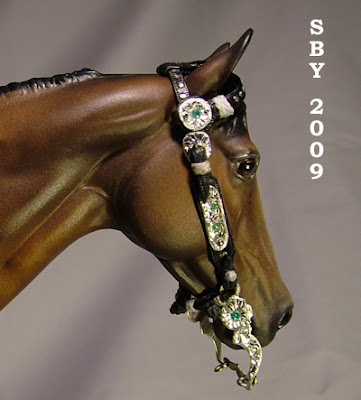 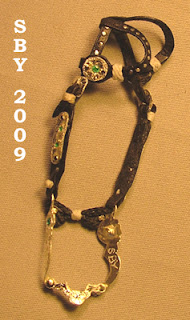 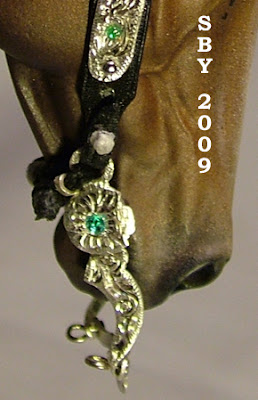 Steep or not, I had learned the curve.  The emeralds, of course, could be blamed on the Gem Show (specif., Gems-4-Less).  This was not the first time I'd embedded precious stones in tack (TSII #445, Braided Citrines, was in 2007, if you don't count turquoise halters from the 1980s), but now the bit was between my teeth.  Off and running!

The next bit in the series has to be Angela Gidding's bridle of 2010.  This piece had a great many meaningful layers put into it, as it was built very slowly over a long time of healing.  Serious medical issues were going on.  But the photo of the bit turned out so fantastic that I've used it ever since as inspiration.  People think it is real (full scale).  Possibly the curb strap helps with this illusion... or maybe it's just a lucky shot.  The degree of close-up-ness came out perfectly. 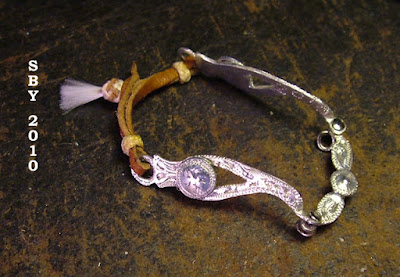 The elegant twist of the shanks, the added-on depth of the concho over the mouthpiece, and the matching bit shank brace makes a big diff.  This really is my fav.

In 2011 the healing went into high gear with TSII #450, the Golden Sunburst Saddle, with its tie-in to the movie, Tangled.  This was/is my FaceBook Cover Picture saddle, the one with the golden flames on the unfinished Independence.  I am trying to restrain myself to one picture per bit, but this is the last time I'll succeed.

In 2012, an outburst of a different kind happened when Heli of Finland ordered a Hitched Horsehair Bridle like one I'd done before.  Most of the piece was made using a standard cast pewter bit, but at its end I got my act together and made a pair of extraordinary double-eagle shanks. 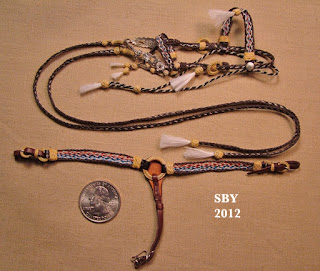 Here's a close up.  The horse is Ramses, sculpted by Carol Howard. 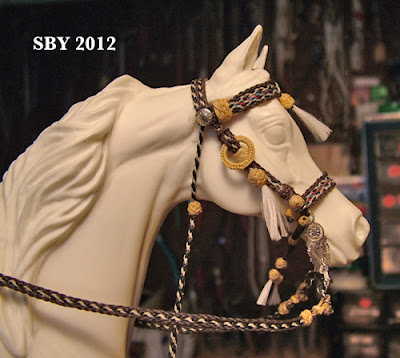 Near side.  For some reason, a separate shot of this bit was not taken. 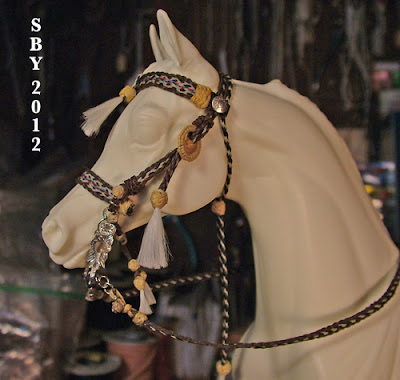 So I'll just zoom in for a close-up: 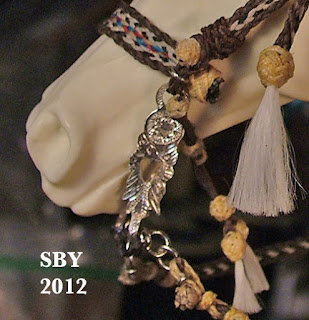 In 2013 came the most extraordinary outburst of all.  Psychologically this was the hardest year of my life thus far, dealing with my mother-in-law's moving to a nursing home (two different ones in 4 months, at age 93!), at the distance of a thousand miles.  There was nobody local whom we trusted enough to handle the mail, let alone everything else.  I remember that year as terrible, terrifying.  Yet when you look at the tack that came out, it is beautiful, triumphant and celebratory.  The Goehring Mexican Silver Parade set may have taken the longest ever to build (15 months), yet I rejoiced in every moment of it.  It was a never-ending saga of model tackmaking at its best. 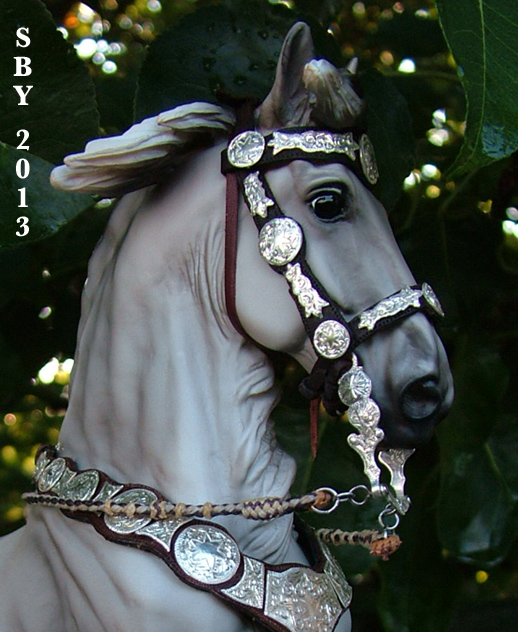 Making the Goehring spawned thirteen blog posts.  I counted them just now --- I  had no idea it was that many!  I'm going to link to only one, the last.  I just edited it to include an index of all twelve other posts; scroll to the bottom of this last, 13th post.   Clyde Goehring: Done at Last!
Back to bits:  Here is where the Goehring started, with a bit!  This one, too, had extra conchos laid on top, which adds a marvelous depth and detail. 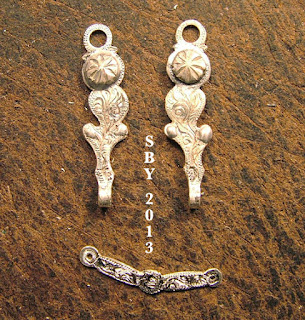 Moving on to 2015, the next bit I engraved started life as a large curb.  I've seen these around but I really do not know what metal it was made of.  I guess I was worn out a bit (!) on engraving, and took the easy way out.  This is another bit of which no separate photo exists.  The saddle is TSII #454, the Gold-Tipped. 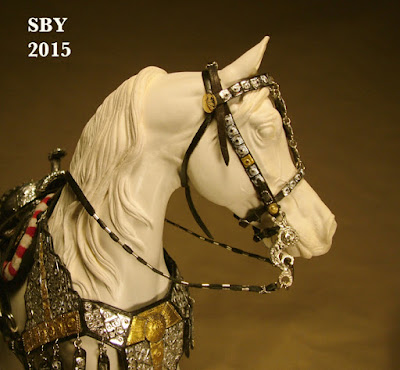 Deep in the fall of 2015, the next bit made its appearance.  This one had lots of character, since it was based on the squirming tentacles of Davy Jones!!!  There is a blog post which includes its saddle design ideas in general: Tricolor Tapaderos 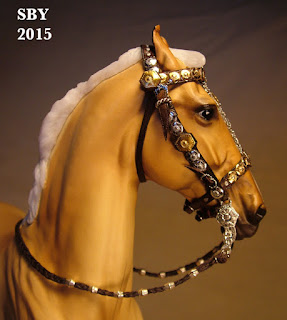 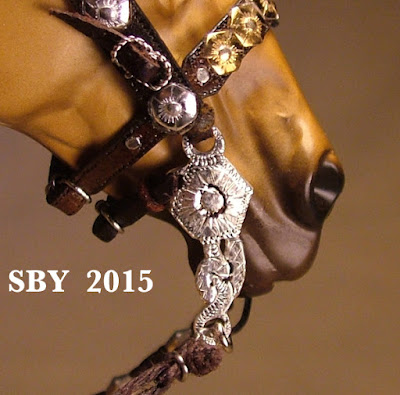 And a view of the near side, on a different horse: 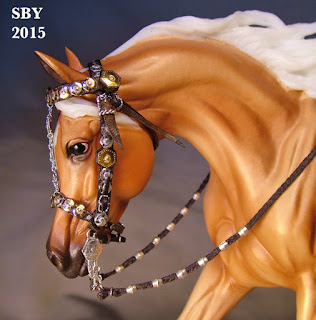 For 2016, I outdid myself, if I dare say so.  Another classic was born, one of the most difficult-to-make and elaborate bits yet.  Another model tackmaker whom I greatly respect pounced on it -- there is no other word!  Thanks, Heather! 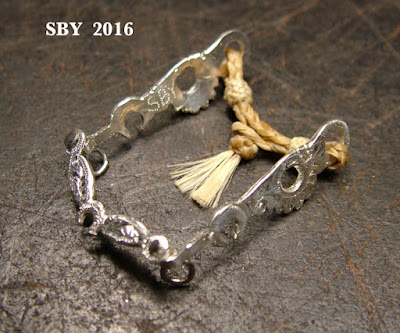 This TSII bridle was sold by private auction during BreyerFest of 2016.  The horse is Victrix, by Carol Williams. 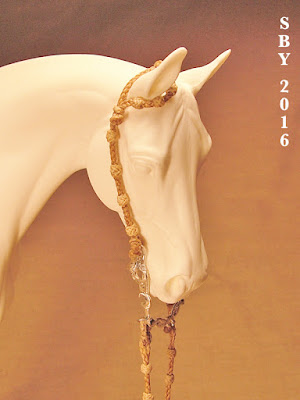 For the 10th engraved bit, I was on a roll.  Although this particular design did not involve a lot of engraving, it was tricky and hard to make.  In a bit of bad luck, the method used to hold the bit to the bridle covered some of the upper shank.  Still, it should be obvious what this bit is supposed to represent. 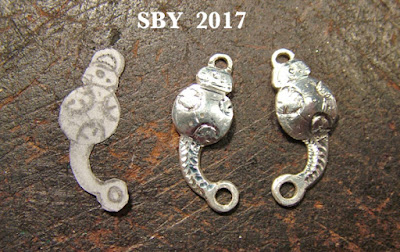 Here's the bridle, making sense of it all: 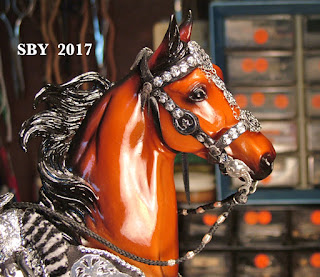 We may yet have a blog post on this extraordinary set, TSII #456.

I mentioned other bits back at the beginning of this post.  This is going back in to deep history, despite best intentions.  (When you're interested in model bits, time seems to vanish.)  I first purchased a couple pair of the right-hand design (below) in 1991, and have kept one as part of my own Malaguena's rawhide bridle (built 1995).  It's been a touchstone for me, down through time.  "It hasn't tarnished."  Here's that bridle, modeled by Fancy: 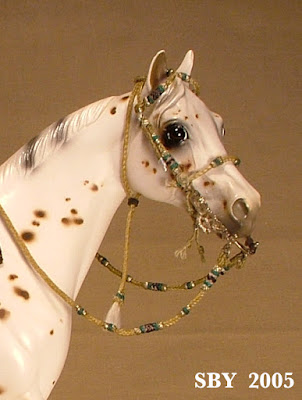 I do not know the manufacturer, nor even the source country! of these bits.  I only know my original source is long gone.  We conjecture they came out of Asia, although Mexico is a possibility.  We also suspect they were/are from the jewelry trade. 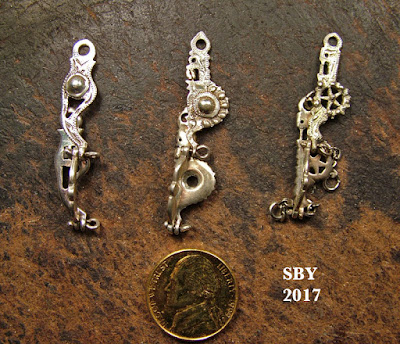 The size, the detail, the strength:  all are supreme.  Clearly these are part of a set.  About 5 years ago I found the left two pair and purchased them from another model horse hobbyist -- you may be sure at a pretty price!  Then, just this year (2017) the girl to whom I'd sold the other of my original pair let me know it was available.  So it came back to me.  It's not true there was no tarnishing at all, but cleaning was minimal. 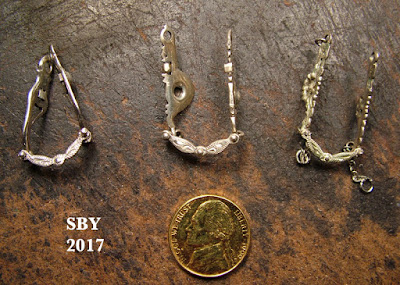 Over the years I have sought information on these bits, but it has been frustratingly slow to accumulate, and I still really don't know any more than I've shared here.