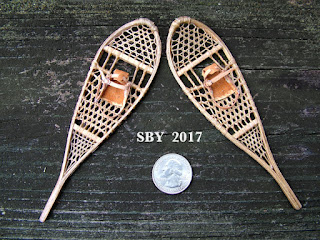 For at least 10 years I've been saying I wanted to do a pair of model snowshoes.  In the past month this dream came true.  Now that they are finished, I think the real dream is that I captured the process in drawings and notes, and am on the cusp of drafting several Plates about them.  One plate is already in pencil (the first step).  What could be more me!?  It's almost funny, but these shoes have been a definite step on the way to my next book -- which will be, never fear, about braided model horse tack!

Not every step of making the Snowshoes was photographed.  This post will be an overview.

I began with a jig, or form, made of solid balsa.  I'd inherited a slab of balsa from my father-in-law and it was easy to cut.  This first picture also shows my 'test toe.'  I knew I needed a test piece:  How to do the curve of the toe?  How to lace it?  I was stumped for quite a while, despite my husband's snowshoe book which at least gave me the names of the parts. 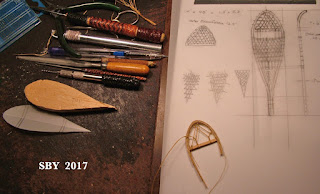 After spending way too much energy attempting to make a metal liner for the toe curve (my test piece still has metal in it), I tumbled to the simple fact that the iron-on strips of wood I was using would hold their own shape nicely on the jig.

I knew about iron-on shelf edging from my own model horse collection shelves.  I knew about using pins to hold things down on corkboard from my early youth, making model airplanes (!).  I had practiced iron-ons with my parade sets.  And, from decades of making 1:9 braided bridles and from this spring's Wicker Chair, I knew what I'd be using for rawhide.  Tandy's Tejas Fine Sinew 30#, of course!

At first, my snowshoe frames were fastened with pins.

Then I got all perfection-y about it, and decided to use wooden pegs.  I made them from flat toothpicks, of which the kitchen had a bountiful supply.  I shaped the toothpicks with the X-Acto and jammed them through one of my drafting circle templates.  I drilled the holes with the pin vise, visible below (black braided handle). 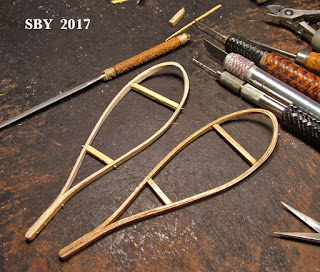 Sanding and staining were done, and then varnishing.  True to a tackshop's practice, the stain was Leather Glow and the varnish none other than Super Shene, four coats.

The next step was to cut grooves in the sides of the toe and tail.  NOT in the center part, oddly. 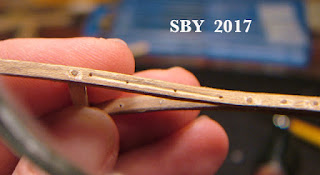 Because the tail was the smallest part of the lacing, I started there first.  There is a cord around the inside of the areas of the toe and tail, called a lanyard. 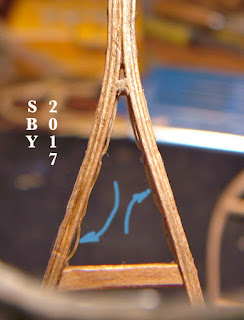 Although it was relatively easy to figure out how to tie the tail lanyard, its execution was challenging.  Bevelling the holes was next to impossible and their sharp edges did a deal of fraying on the sinew.
Lacing the tail, I got into the real heart of snowshoe-making.  Many pictures of both full scale and miniature snowshoes later, I got this far -- I was deducing the math entirely on my own.  I think I redid the tail 4 times before I decided to stop counting the re-dos. 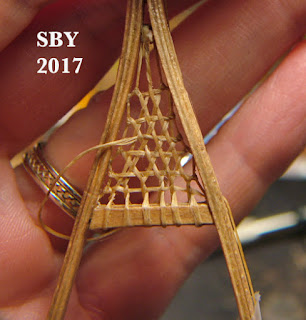 Note that I was most comfortable orienting the shoe tail-up!
(Somewhere in there was a lot of toe-lacing on the test piece.)

If this next shot looks like a success, I can only say it was temporary.  Note the uneven bottom row (next to the crossbar) on the toe. 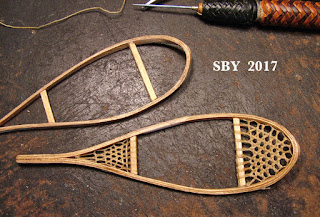 What happened next was that I finally turned to the vast sea of information called the Web.  In short order I was possessed of multiple ways to tie snowshoes.  On Sept 16 I made up a master cord (toe cord, which carries the user's weight) and laced the center.  To my uttermost astonishment, IT WORKED THE FIRST TIME!!  The math counted out, everything fitted together, and I couldn't be more pleased!! 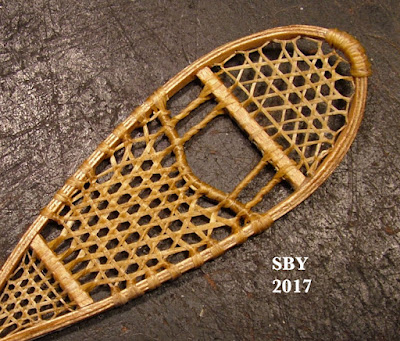 It had taken all my toe and tail adventures to bring me to the proper frame of mind to appreciate what a miracle that was...
Somewhere in there I had re-laced the toe.  Note there are 6 rows and no unevenness at the crossbar.  I had done both centers by Sept 23rd.  This odd photo made one shoe look larger. 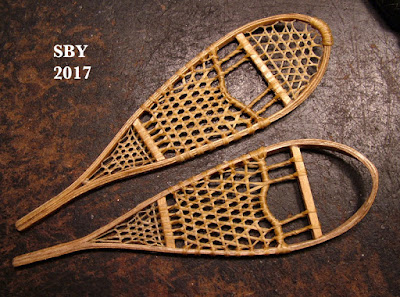 On the 28th, I made a difficult decision.  I was going to undo the toes and re-lace them, for the millionth time, and get them right for once and for all.  It meant undoing even the toe wraps (one of which had been glued).  Those wraps were there to protect the shoes from ramming into rocks and logs -- something my husband insisted happened.  (He was a snowshoer and had definite, if sometimes bothersomely work-adding, opinions... not the case with horse tack.)
I was picky now.   For the umpteenth time I undid the lacing and re-laced... again 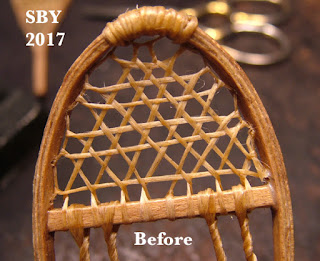 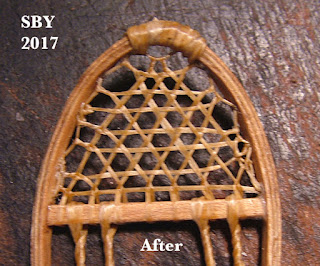 finally got it right.
It was now the end of September and more than 40 hours had gone into the snowshoes.  Pioneering pieces are always going to be longer.  After an almost-argument over the bindings (they had to actually work, so that the user's toes pivoted around the master cord, plus no boot could slip forwards or backwards), I slowly evolved them towards something I was happy with.  The bindings took an extra week.  Why does the littlest detail loom as the hardest to finish!?  Because the artist's mind has already moved on... 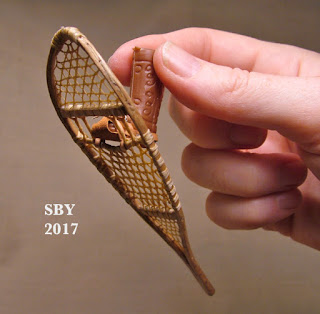 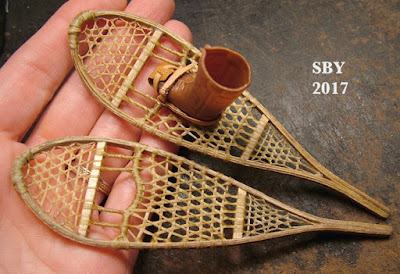 My model horse friends would know this was a Betsy Breyer boot.  I was less sanguine about the wider world of doll house miniatures and even less about the Winter Sports section of eBay.  I had discovered there was a contemporary market for miniature snowshoes in the full scale listings!  This was not unlike the salesmens' samples of model saddles in the Old West --- except those saddles were 1:4 scale.  (When an Old West Americana auction says "miniature saddle" they usually mean 1:4 scale, which for model horse people is ridiculously too big.)  The miniature snowshoes, though, were a decent tiny scale.  They had a different problem:  a lack of detail... and a consequent lack of price.
Oh well.....
toys versus miniatures again... 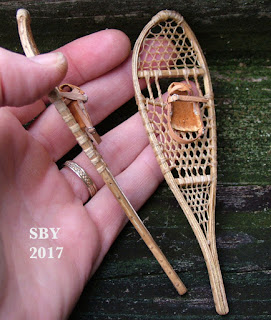 I knew what I wanted from the start:  to auction these snowshoes but to keep the instructions, drawings, notes and draftings.  That was the real harvest.  With the Guide as my example, I wanted my next book to be based on a pile of inked vellum pages.  Computer aided drawing and PhotoShopping is all very well and good and I intended to use it, but there had to be a starting point. 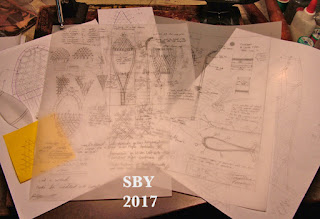 Photographing the snowshoes was, like every other step, surprisingly hard to figure out at first but then fun and easy.  I wanted to boast about my tackmaking skills but make it clear only the shoes were the subject of an auction.  In the end I dragged out Steve the general-purpose Western Handler, dressed over so many years I can't recall who did what except I did the belt and bolo, LaJewel my best standing resincast, a Williams Matriarch finished by Katie Richards (thanks Katie!), my famous Elk saddle (it has the most rawhide braiding of any in the house) and my only solid-rawhide Fully Braided Rawhide Bridle, the year 2000 one.  There I was, polishing silver with a Q-tip and wondering whether I'd used any coatings on that bridle 17 years ago.  I hadn't. 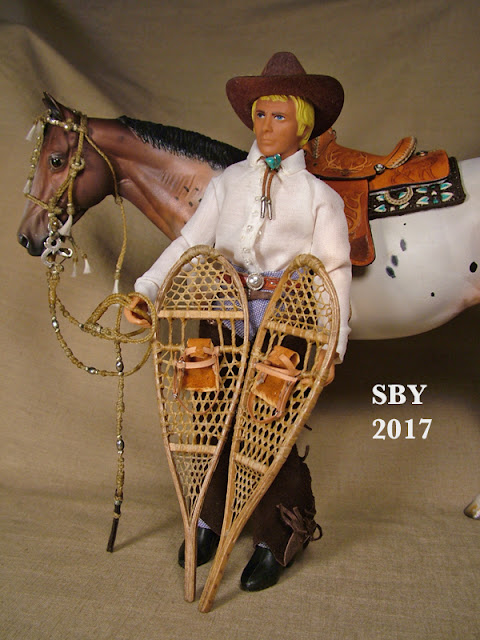 Then I went outside.  Over the years my favorite photographing spot has grown so much moss I often have to PhotoShop the green out.  It's a problem, but fortunately a small one. 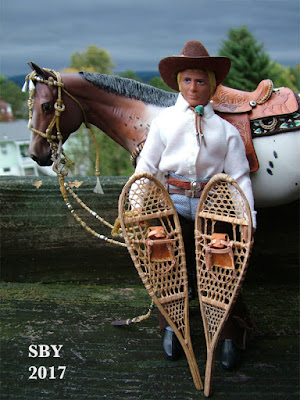 Clouds cannot dim my delight at having finished these shoes.  Light, balanced, exquisitely detailed, they are everything I dreamed they'd be:  the model maker's vision come real.