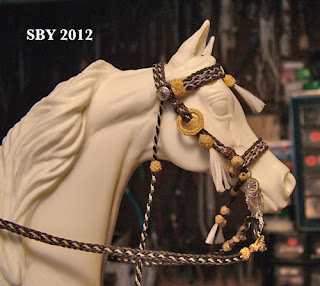 After falling in love with a book on Hitched Horsehair bridles, I wanted to showcase every model example I had ever made or collected, or even seen, that depicts this material.  It hasn't been easy to choose amoungst many pictures of a single bridle I'd made, bridles other artists have made, or pictures of the full scale pieces!!  And I want to share the book too:  Horsehair Bridles, a Unique American Folk Art, Book Three in the Bridles of the Americas series, by Ned and Jody Martin of Hawk Hill Press.  Frankly, this runs the risk of being a long post--!

I have accumulated several e-photos of hitched horsehair bridles over the years.  Some of these are off eBay: 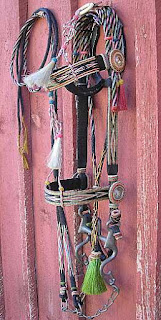 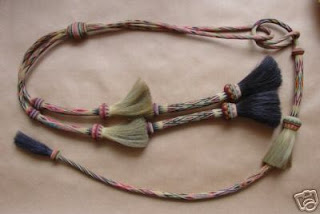 This one appears to be a page from a book I have (thank you C.R.), Cowgirls of the Wild West, with photography by William Manns: 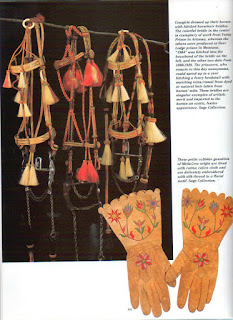 These two look suspiciously like shots from the Horsehair Bridles book, yet I'd swear they came from online auctions:

In accordance with a sometimes frustrating precedent, I cannot use the words "mini" or "miniature" when speaking of Old West tack.  When you use that word, you get pieces like this: 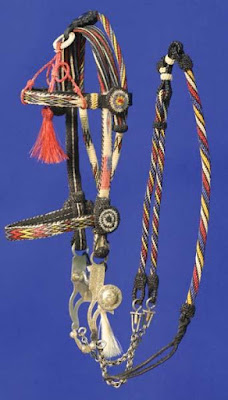 And this one is a reference that a customer sent me (thanks Christie!). 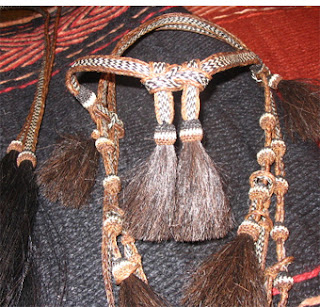 The earliest piece of model tack that I ever made that was based off a horsehair bridle is this one, the Blue Mexican Bridle.  It was built in 2001 and submitted to the NAN Auction of that year.  Looking back, I can say I was influenced by a visit to an actual tack shop in Nogales,  Mexico.  I bought a full scale Santa Paula bit on the occasion -- I still have it.  (Some day!!)  I showed the man behind the counter one of my model bridles of the time; I can still remember his response:  "A bridle for a mouse!" 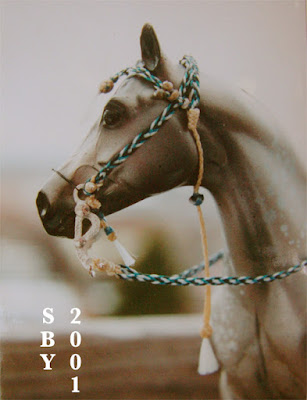 Of this bridle, I recall being swept away with the new color and ideas of braiding sinew and floss to get this effect.  The bit was scratchbuilt from sterling, as all my bits were by then. 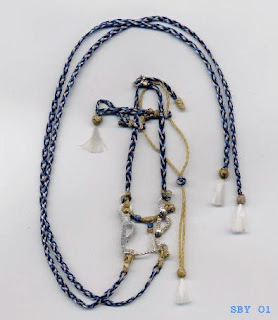 I was quite carried away.  I took lots of pictures on lots of horses. 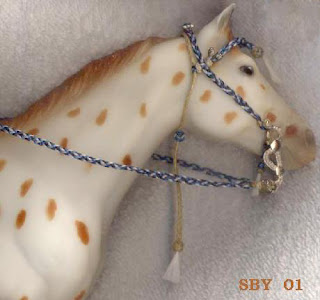 Unfortunately no one else shared my enthusiasm, and no requests or even responses came in.  The bridle remained a one-of-a-kind piece of model tack, another example of that crazy TSII's obssession with braidwork. 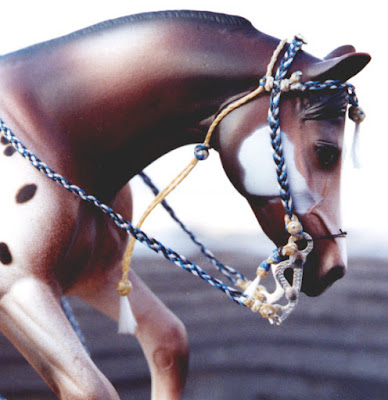 Four years later, in 2005, one of my good customers entered for a Hitched Horsehair bridle, which I happily abbreviated HHH.  Neither one of us cottoned on to the fact that the reference she sent me was not hitched at all, but braided:  Braided strands of horsehair had been sewn together to make the dizzying black-and-white with brown edges.  I was sure I could fill her wishes.  Did I not have a Juliane Garstka bridle to show me the way?

This stunning piece of model tack had been acquired in 2002 by me during my visit to Germany (and France and England).  It was an elaborate trade deal with Regine Nikolaidis as go-between.  The bit was made by Anja Brethauer.  This was the first time I'd seen actual rawhide used on a miniature bridle (the buckles).  And the cheekstraps and browband gave me a fabulous idea on how to do horsehair. 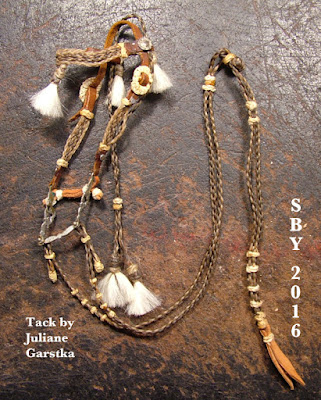 This is what I came up with: 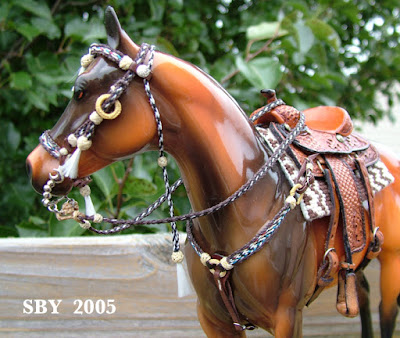 It was an enormous effort, involving braided cotton thread for the interior colors. I sewed the strips together with the thinnest of nylon fibres and my tiniest needle.  The bit was made, again, by Anja Brethauer. 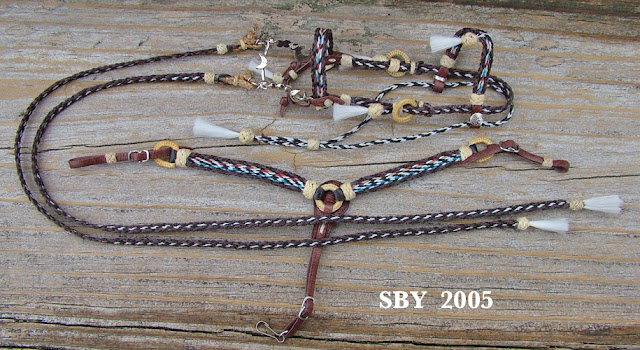 And there my efforts rested.

I kept collecting interesting pieces.  Somewhere I picked up another Garstka piece.  In this case the "horsehair", again, braided-and-sewn, not hitched, was represented by a ribbon of fabric.  What a beautiful piece, so full of character: 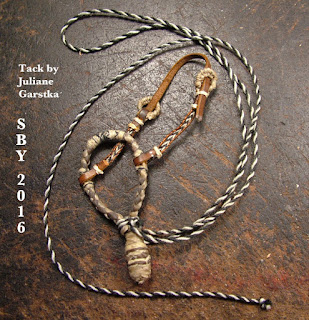 My friend, Regine, had earlier sent me pictures taken at a museum (?) with some fantastic tack in it.  The Germans were more interested in hitched horsehair than I was.  One of that handful of photos showed this, a saddle with some amazing insets: 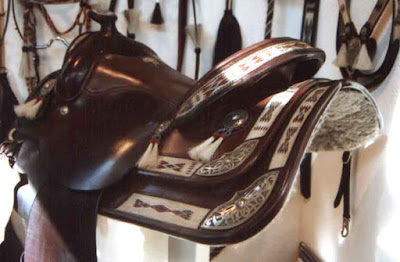 Somewhere around 2006, another tackmaker, Kim Smith of FL, showed great ingenuity by printing patterns on a smooth, tightly woven, linen-like fabric, cutting out the strips and using them to depict, in miniature, the same effect:
(I'm afraid I don't know the photographer; if anyone can supply this, I will credit them!)
To date, this is the best effort I have seen to capture the look of hitched horsehair in model tack.

Hitched horsehair, as opposed to braided-and-sewn, consists of 'pulls' (each one about 10 hairs) wrapped, woven or tied around an armature of very thin rope or string.  The string is then spirally wound about a core, usually a dowel of wood, with the horsehair tying each winding (lap or pass) to the next.  The resulting 'tube' of hitched horsehair must be flattened out before use.  Thus 'hitched' horsehair pieces always come in the shapes of either flat strips (ideal for belts) or of ropes.  Hence the fat cheekstraps, browbands and reins of so many of the "prison bridles" seen.  I'll tell you honestly, I was not taken by that texture very much.  I proceeded to ignore hitched horsehair for many years.  Which does not explain the steady accumulation of pictures and articles about them in my files...

In 2009 I figured out, using twisted thread, how to do a really good mecate. 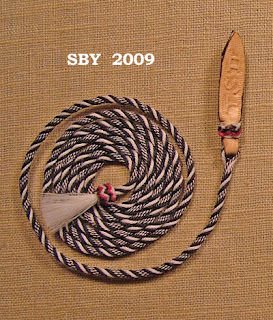 I was so excited I proceeded to do it again with colors, this time on a bridle.  I called the bridle Candy Stripe. 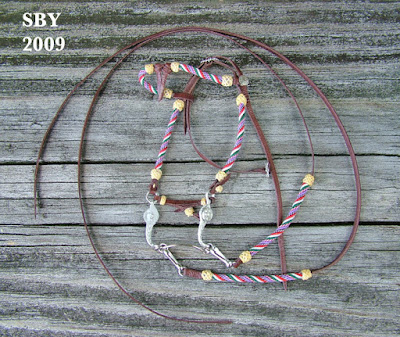 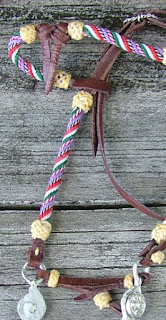 The Candy Stripe bridle went, via a benefit auction, to Jackie Arns.

In 2012 the time came round to fill another order.  This was to be a repeat of the earlier Hitched Horsehair bridle and breastcollar set... for a European customer, Heli.  (Which made the abbreviation HHH even more appropriate: Heli's Hitched Horsehair.)  I outdid myself, if I say so: 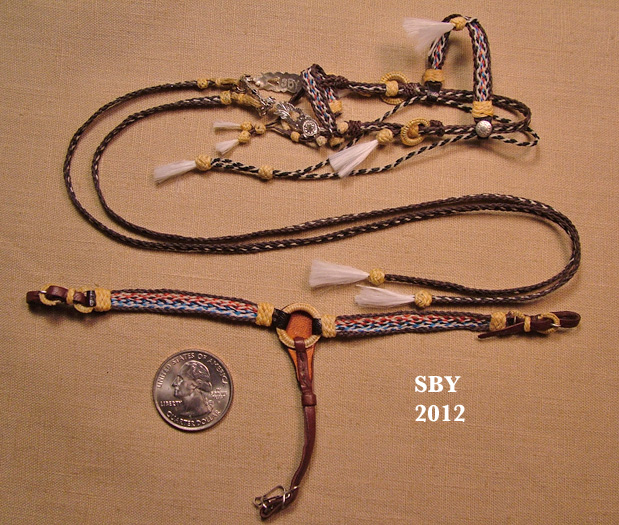 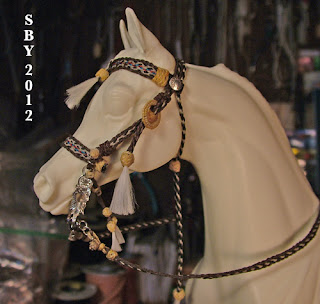 Another scratchbuilt sterling silver bit, and silver brow concho.
What was wonderful this time around was I had some real horsehair tack myself.  I'm not sure where I got them (Tucson? Nogales?) but these reins were a big help in doing the model reins: 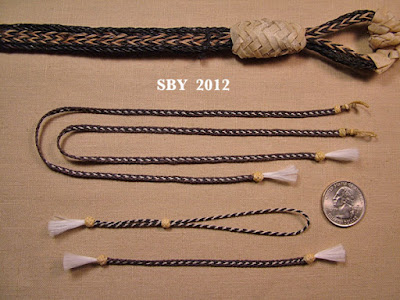 They were indeed of 8-strand square braided horsehair strips, sewn together into the larger, square-cross-section reins (using nylon, I think, for thread).  I wonder if these were not from the Tucson Gem Show...  hh'mm  h'mm...

And so we come to today (2016), and the Martin Horsehair book.  Here's a link: Hawk Hill Press's Horsehair Bridles book.
In my reading and researches, I'm finding many hitched horsehair bridles that have braided leather for a majority of their material.
Just looking at the face ornaments gives me joyful ideas.
This book is feeling like one of those volumes that has life-changing possibilities for me... as did James Nottage's Saddlemaker to the Stars, about the silver saddles of Ed Bohlin (thank you Eleanor!); and as did earlier braiding books by Bruce Grant, Robert Woolery, Tom Hall and Gail Hought.  Oh yeah.
And that's not even mentioning Book One of the Bridles of the Americas series, Indian Silver. !!  which I also have.
I see I am under grave suspicion of hypocrisy, for I've just scolded another tackmaker for trying to do too many projects at once.
Let us be grateful we're alive and have our wits about us.  I am grateful to be having this problem, instead of so many others, less susceptible to beauty.


P.S. I'd be grateful if someone could explain why this blog, approaching 50,000 hits after 4 years, is suddenly garnering hundreds of thousands of hits since the end of August... "everybody's so different, I haven't changed."
Posted by timaru star ii at 4:48:00 PM