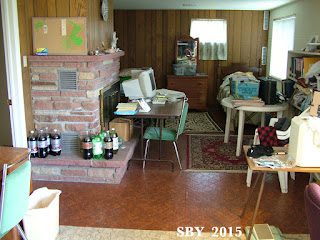 The making of Fancy's Hackamore II 's mecate naturally divides itself into two parts, the CO part and the PA part.  This is the basement of my Colorado house.  (It is, in fact, the exact spot in all the Earth where I started making model horse tack, back in circa 1973.)(If you look at my 2014 Winter Photo Challenge opening shot you will glimpse the back wall.)  I had thought to make one post for one mecate, but things expanded (almost 40 pix!), and I've decided to take advantage of this division.  Of course, this is a sub-division of the divison of the hackamore itself.  Hackamores consist of three parts:  Mecate, Headstall and Bosal.  Bear with me:  it will eventually all come together!

I'm starting with the mecate because it's the easiest of the three.  (Whether I'll actually have time to complete this hackamore before BreyerFest, let alone have a second on hand to sell, remains to be seen!  But I'm having great fun.)  Things don't always go as planned, do they?  While in Colorado my tackshop reached this state of being: 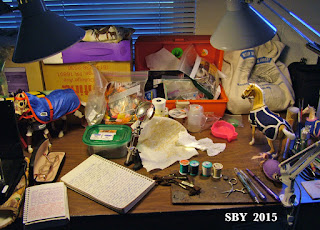 It looks grand, but it was destined not to produce anything beyond parts for one mecate.  Other actors took center stage -- one of them was our car -- and my time, always limited by acting as hinge-pin for 3 people with vastly different goals, became more limited.  The computer stole further time by being so dern interesting and addictive, but I won't go into that... : )

... This post isn't about the perfected miniature of a real mecate, such as my skill can now encompass.  It's about replacing what was lost, reproducing Fancy's Hackamore's mecate, and that means going back 10 years and doing what I did then, in 2005.  I dug out the N.A. notebooks (my tack bench notebooks) that covered those 3 long-ago hackamores. 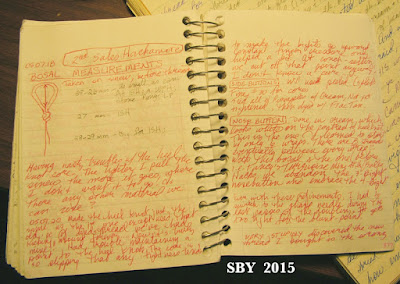 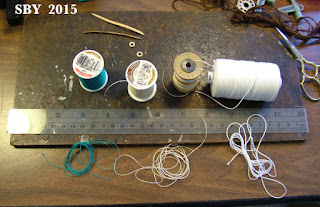 At the time (2005), spinning as opposed to braiding was marvelous and fresh for me (I had learned it in 2000), but I was still incorporating braided-thread elements in my mecates.  Partly this was from a long history of braided model mecates (all the way back to the early 1980s), and partly it was because braided-thread just looks so good and works so well for so many model horse tack applications.  I'd had the idea to use it for the checkered (flecked) strand of the typical horsehair mecate, and this looked lovely.

The hook is a piece of wire fastened to my Orange Tackle Box front closure.  Lacking crochet thread (Aunt Lydia's at home), I borrowed some "Meltler" from Mom (the large white spool), and peeled it to 2/3rds.  This turned out to be very close in size to crochet. 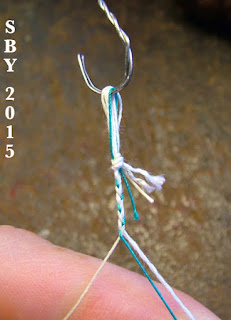 Somehow things always go funny.  The ends did not come out together at all: 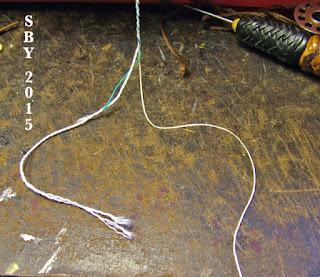 I thought I'd started with 4' of each, but that turquoise thread clearly had other ideas.  Finished length, 3'2".  O.K., Fancy's original mecate was a bit short...

I did want to make a second piece.  This time I indulged in a bit of improved tech.  The next braided-thread used 4 threads.  The bulk is very nearly the same. 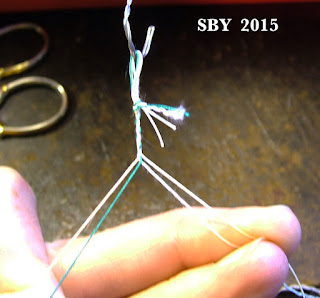 Now for the quirts.  Full scale mecates do sometimes have a little leather lash at the non-tassel end (the tail end), but they do not have rings -- something I wouldn't learn for another few years.  Ah, well, Fancy's had a braided ring... 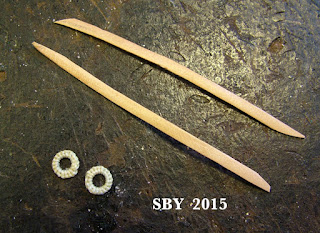 While it is not in the scope of this post to teach ring-braiding (that's for the next book), I want to share that soldering those rings took the most effort and was the biggest adventure of my tackmaking time in Colorado.  I ran through several ideas when I realized I'd goofed and not brought any pre-soldered rings: cutting the end off an Aluminum tube was one.  When I finally submitted to searching out Dad's soldering tools and setting up and doing it... the rings wouldn't solder.  Frustration extreme.  In the end (I wasn't timing but it felt like hours) I tumbled to the fact that one cannot solder stainless steel.  DUHH!!!!!  I didn't have brass or galvanized rings, only a small selection of emergency hardware, because normally I make my own rings from stainless.  So that is how these two mecates came to rings of Gold Filled Brass...  that's all I had of the right size that would solder.  : )

Even in so simple an act as slit braiding, there are lessons to be learned. 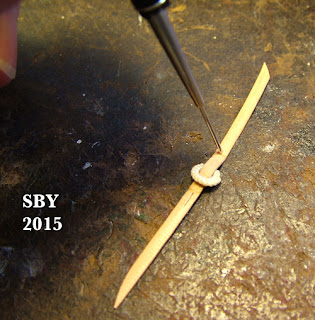 If you cut the slits like this, the ends wind up uneven. 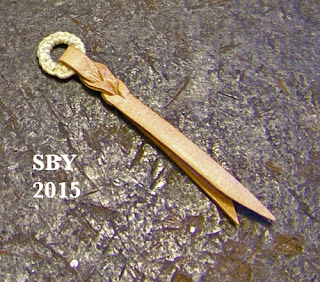 Why?  Because you didn't stagger the slits and allow for their slight difference in distance from the ring.  A better way is to cut each slit after the passing-through. 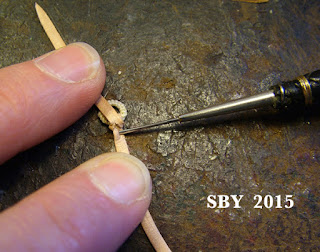 Also, I'd forgotten to bevel the edges, something I almost certainly would've done.  It's something I've been doing for thirty years.  (Note bevelling is done with two hands, but I had to hold the camera.) 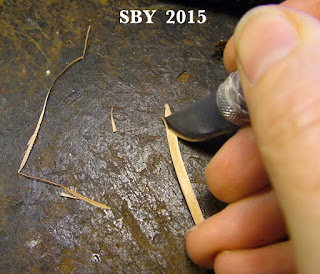 Fancy's had two sets of slit-braid on the quirt.  Some call this a bleed knot. 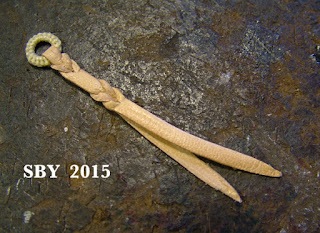 Even here, the ends don't match! 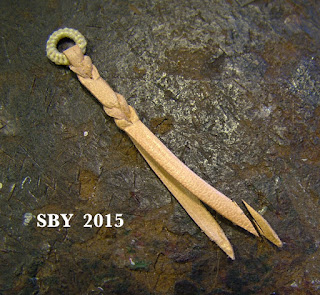 We are well and truly on the way to two separate and distinguishable mecates. 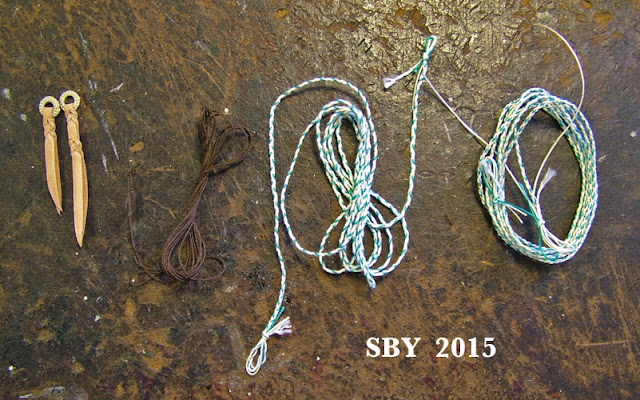 This is all I was able to manage over a number of weeks, from that incredible and so-beautifully packed-up tack shop.  I hadn't even brought heavy brown thread, so I made my own out of lighter-gauge thread.  (I very much enjoy spinning thread by hand, useful for miniature mecate-making.)
All I can say is it really looks like I'm not meant to make tack on trips, no matter how I want to.  Attending to car matters was the excuse this time; every weekend we went out of state (WY or NM), and nearly every evening was a chauffered picnic, catered by you-know-who.  Talks with parents, birdwatching (we got Golden Eagles!), a LOT of piano playing with Mom, strolls before bed: all these were more important.  So be it.  I enjoyed them all very much (except maybe the car).

Next chapter will be the spinning of the mecate.  As of this writing it is finished.
Posted by timaru star ii at 8:11:00 PM