Like my webpage on the TSII bridle Cat Bar II, this will be an in-depth look at a narrow slice of TSII tack: just twelve pieces.  (The narrower the better; otherwise I don't finish!)  It's quite time-consuming to translate my massive scrapbooks to this blog post format... especially since I'm not using my scanner.  But I promised (in my NAN Cookies post), and, once started, got hooked.  Enjoy!

The North American Nationals began in 1994.  The TSII's first donation piece was the very next year, 1995.  I started out small:  Two Western Show Halters of our fanciest make.  These were "filigree enamel inlay," my own phrase for cut-out silver tape laid upon prism tape (holographic tape) color for the plates.  One was black leather with blue; the other was dark brown with pearl.  The halters landed in the hands of Karen Gerhardt, and like the artist she was, she used some of her own donation horses to photograph them.  As is normal with early pieces, I am lucky to have even one photograph of it.  I believe it sold for $225.00, a pretty high price at the time.

Imagine my astonished delight when, yesterday, "pawing" through PawPrints Saddlery blog (I randomly do this to other model horse blogs), I stumbled upon what could be this very halter!!  See picture 39 of the 89 of her GLC No Frills Show Report, the Matriarch.
http://pawprintssaddlery.blogspot.com/
The twisted-hammered-wire buckle and keeper are giveaways.  Aye it's true!!  Seldom if ever do we connect again with a piece nearly twenty years old... 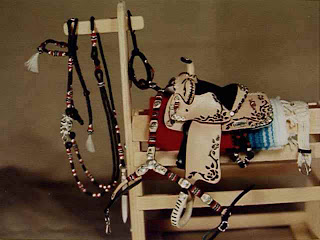 The second piece, in 1997, was a saddle.  The first donation had been such a success I became brave and bold.  This was TSII #398, Rose Silhouette, a cutting edge piece in terms of the tooling pattern, the bridle and many other aspects.  It was based upon a picture I'd seen in R. Beatty's great reference book, Saddles.  My bravery was justified when TSII #398 went to Donald Meiner for $660.00, one of the highest prices paid to date for a TSII piece.

For a long time, the third piece was overlooked and forgotten.  Just one photo exists.  I found it in my Grey Braid scrapbook. 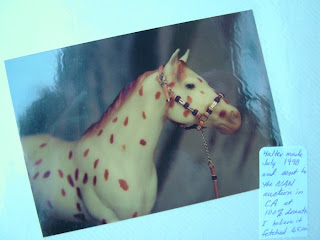 This is a shot of the actual page.  The label says "Halter made July 1998 and sent to the NAN auction in CA at 100% donation.  I believe it fetched 65.00."  The piece featured double silver ferrules and red/black/white braided buttons.  This was the start of "smalls alternating with larges," because a large piece took so much effort and time that I could not put one out every year. 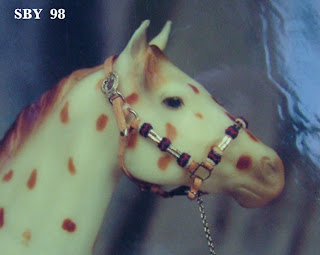 Here's a closer view.  The background ripple effect is a light reflection off the scrapbook sheet.

The fourth NAN Auction donation piece was a real flagwaver.  We pulled out many stops!  It was the year 2000 -- what a great excuse for a lot of fuss!!  The resulting saddle, an extraordinary work of contemporary art, was TSII #415, the Millennium Set.  I took apart a watch (I think-- don't really remember) and used the circuit boards from it on the saddle, as well as tooling a computer and keyboard on the breastcollar. 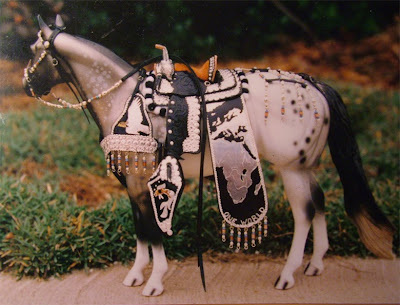 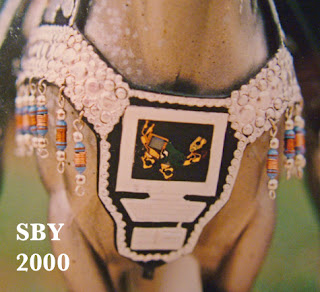 Notice the serapes with their world maps; the offside featured the Western Hemisphere.  Note the drops on the breastcollar and hip:  made from resistors!   The tapadero on the near side is a goldfish; note the heads of the birds on the shoulders.  As for the creature on the chest of the breastcollar, well, I'm not sure what it is.  A superbunny?

Probably, with all its copper wiring and extensive silver tape, this set is rather corroded by now.  But it was a great deal of fun to design and build:  my personal contribution to the Millennium. 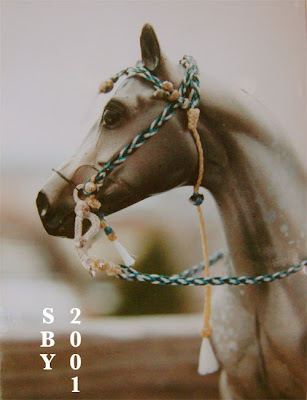 The fifth piece was donated in 2002.  I had been inspired by a trip to Nogales, south of the border from Tucson.  I had gotten inside a real Mexican tack shop, and seen amazing things.  For whatever reason, I wanted to do something 'barbaric, circus-y and flashy' yet still falling within the bounds of TSII calibre and quality model horse tack.  Again, for whatever reason, it didn't catch on, and no piece was made even remotely like it afterwards. 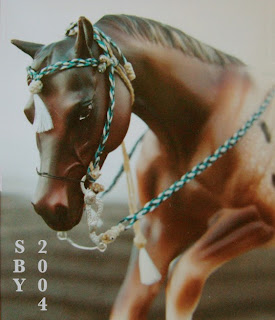 I called it the Mexican Horsehair Bridle, done in blue, black and white nylon sinew.  The bit was handmade sterling silver -- I was starting to come into my own --  with Rio Rondo conchos soldered on top.

In 2003, inevitable pressures caught up with me.  What artist does not bite off more than they can chew sometimes? Two Peruvian sets were started in February.  One of them, for a customer, was finished on May 6.  It was numbered 3 because I had started the other one fractionally earlier. The NAN-bound set, offficially #2, missed the Auction by not being done on time.  :(   This sixth donation was finished the 9th of July, 2003, and sold on eBay in August.  Colette  Robertson demonstrated her great support for the TSII by smashing all records previously paid; the winning bid was $1925.  As with most of our NAN Auction pieces, the contribution was fifty percent. 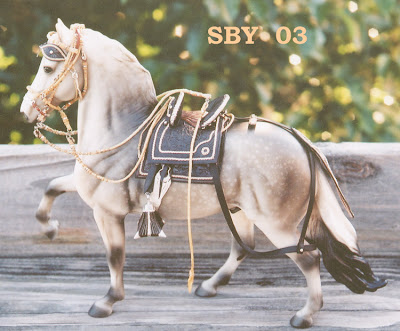 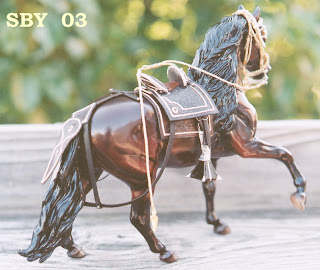 Thus I was a pioneer in the practice of auctioning off a piece separately from the formal Auction.

The seventh piece, contrary to my big-and-small pattern, was a fantastic saddle.  Even now this beauty amazes me.  It was a companion to, part of the series if you like, to my famous Elk Saddle.  In 2004  TSII #437, the Bongo, was a fifty percent donation. 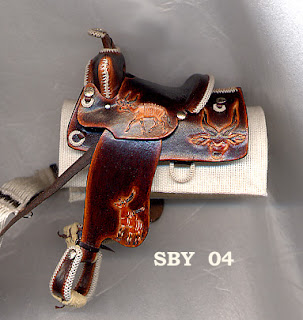 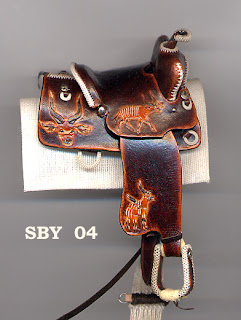 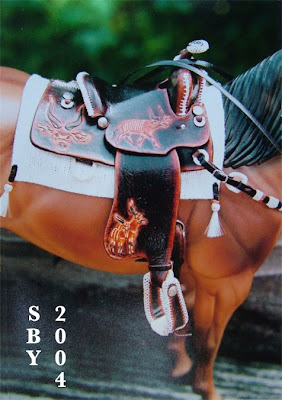 Note the white braided edges, and the extensive braided buttons on the bridle and breastcollar.  The piece was a tour-de-force.  Even the dee rings are covered in braidwork.  The color was achieved by hand-dyeing natural leather.  I remember the coating process, with Super Shene, being fraught with danger and difficulty, because the dye ran.

During my research for this saddle, I learned that old Bongos develop dark coloring.  I have always loved these members of the deer and antelope family.  Someday I must make more deer-themed sets...

In 2005 I set out to repeat the triumph of the Peruvian set, and started with a jaquima, since it was small and could be finished easily.  This was our eighth donation.  The 4th TSII Peruvian, P4, was auctioned as just the jaquima.  Margaret Olson won it, $300.  A month later the bridle was built.  Not until the end of January 2006 was the rest of the set finished.  It was sold to Margaret -- we have a price, $695 -- and ten percent of this donated to NAMHSA. 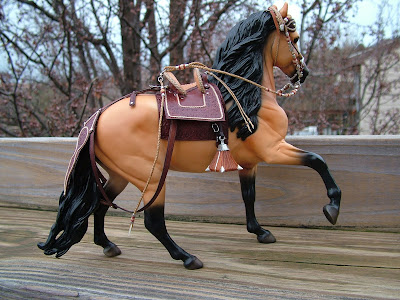 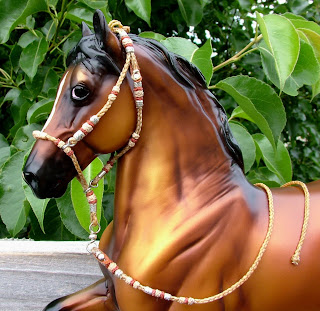 Thus there is precedent for a rather slow and complicated path to being born.  But a Peruvian set takes so much out of the artist, and has so many parts and pieces, that this was necessary.

Amazingly in 2006 there was a donation, nominally a "small" since it was a bridle.  What a bridle!  As mentioned, I wrote up an entire page of my website about it.  http://www.timarustarii.com/braid/tmcatbar.htm
It seems to've been the ad for the auction.  Our ninth donation sold for $325.00.  It was begun 0604.09 and finished 0605.03, and celebrated the making of the first Cat Bar's braided rawhide bridle in 1986. 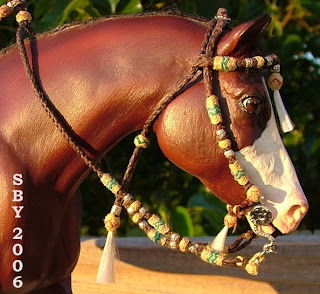 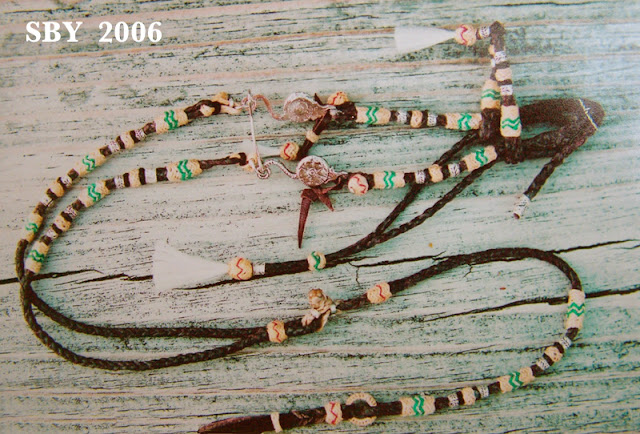 In 2007, not to be left out but unable to contribute a 'large,' I chose again a braided bridle, our tenth donation.  This was the Cleghorn, named after the man for whom it was intended as a gift.  It was based on a real braided bridle, seen in a High Noon catalog, which was made by prisoners in the 19th century.  Begun 0704.19, it was finished 0705.04.  Robin Lee had the high bid, $260.00, at fifty percent donation. 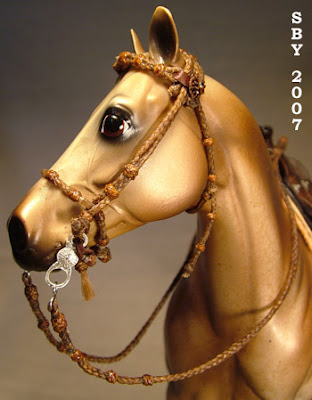 I recall the Cleghorn as being a difficult piece, both to decipher (engineer) and to get excited about.  The reference picture was hiding some crucial details.  I have not done any more mud-colored braided bridles.

The TSII's eleventh donation was in 2008.  As told in my other post, it was not really our tenth piece -- I had miscounted over the years, missing the second and not being sure about some of the Peruvians.  Nor was it really ten years; since 1995, the true count was 14 years.  TSII #448, officially the ten year anniversary set, sold for an even $2000 to Colette Robertson.  It was based on a saddle seen in one of the High Noon catalogs. 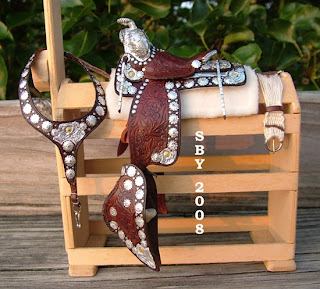 Dig that blanket!
This was one of my earliest coronas, made with Melody Snow's book's help. 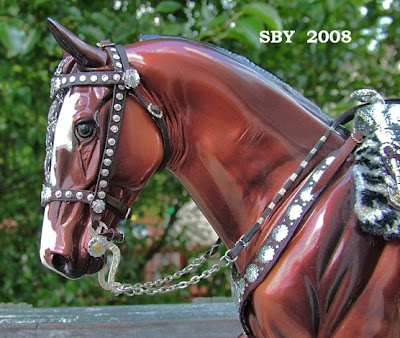 In January of 2009, a braided bridle, our twelfth donation, was originally made with the intent of testing Auction Barn as a venue.  Astonishingly, it was created in just 5 days, 0901.15-20.  Auctioned in early March, it failed to meet its reserve.  On June 27 of 2009, having created a brand new bit for it (my first ever engraving), I re-auctioned it, this time as a NAN donation.  It sold to Susan Peet for $250.00.  It was understood that she had the option of ordering a matching Breastcollar and Romal reins for the bridle, to be made and sold at the same donation percentage.  Somewhat naturally she availed herself of the opportunity!  These pieces were made July 21-August 7, and they fetched $175 total. 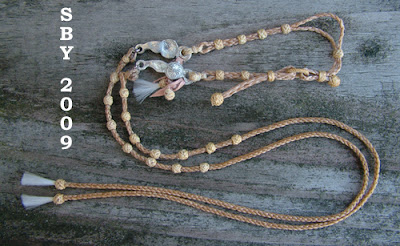 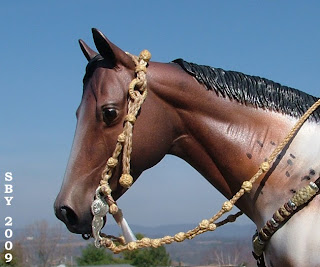 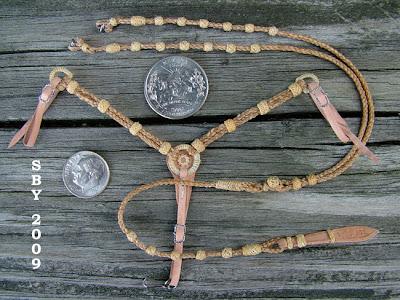 There should have been a NAN donation piece in 2010, but that's the year everything fell apart for me.  I could go to neither NAN nor BreyerFest.  I was recovering from surgery, a hysterectomy.  No pieces have been donated between then and now.

For the future, I certainly want to start up this charming habit again.  We shall just have to wait and see.  Right now I'm working on my remaining 9 Lottery winners.  The Goehring breastcollar is done, the bit and reins are done; the noseband and browband of the bridle is done!  Thank you for your patience, and Stayed Tuned!
Posted by timaru star ii at 8:59:00 PM