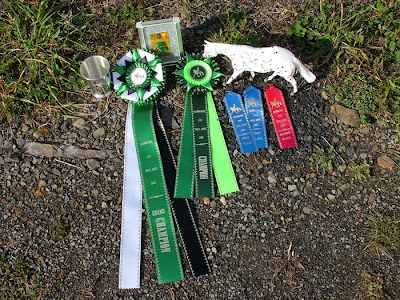 This post is a reprint of one done last fall on my shipchandler site.  Two posts on that site feature horses instead of people, and thus should be over here.

This is the story of two happenings: how I did outstandingly well at Didi [Hornberger]'s Oct 14 [2012] show, and how I dragged the winning horse up to State Gamelands 100 a week later and photographed him.  The photos are almost eerie in their juxtaposition of model persnicketyness and natural beauty.  It wasn't until I'd seen them on screen that I realized:  Here was a perfect portrait of myself.  Mightily focussed on a fine model horse -- able to live by, through and for him -- I yet found myself gradually becoming subsumed by the surrounding landscape, to the point where the last photos don't have Rikki at all.

The story starts with a fairly normal acquisition... Did I say normal?  Is anything in this hobby normal?  The roots go back to Titania, she who is Lady Phase in chestnut appaloosa, my decision to sell her at BreyerFest [2012], and the fact no one bought her.  I changed my mind about selling her after seeing all the chestnut leopard appaloosa Amber foals at this year's [2012] BFest Open Show.  Amber was a mold I didn't have yet.  I'm sorry I didn't appreciate the real Lil Ricky Rocker at BFest when I had the chance; in fact, I didn't even see him.  I was busy lusting after another horse entirely: Mudflap.
I first saw Mudflap, a 2009 Lone Star Event Special Run (of 80 head!) in the fall of 2011, at Didi Hornberger's great double show, Intermediaire and INTERSPORT! Live.  So I knew he was out there.  For some reason, this knowledge blended with all those foals, and with Titania; and with something else.  For a couple of years my soul's color had been charcoal.  (As in black with white mane and tail.)  Now that my treatments were in the past, it was time to find another color... a warmer one... a livelier one.  What was trickle became a flood during NAN 2012 and BFest where I tried valiantly to find a Mudflap for sale.  And then, that very month, Breyer released Lil Ricky Rocker.  What a discovery:  I've always loved chestnut leopard appaloosas!

The local dealer I bought my foals from did not carry Ricky Rocker, so I turned to my next closest dealer, Bonnie Valentine of Horses By Mail.  Much to my delighted surprise, she gave me an excellent deal.  What I did not know until afterward was she must have picked out an exceptional model for me.  A friend at the show said, "All the ones we got in our shop had such bad overspray!"  Having seen only mine, I thought they were all stunning. 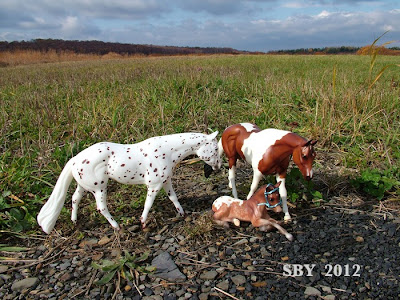 On the subject of Mudflap, I tried very hard to buy one on MH$P in August [2012].  When I failed -- when the price range went way over my head -- I indulged in a fit of boycotting.  I'd etch my own from a Smart Chic Olena, whose body could be had for as little as $25.  Meanwhile I had a problem: Titania could not marry Rikki;  she was for Mudflap (named Rinker, after a kind of boat). (Remind me to post on how the TSII got its name.)  The problem was solved when I remembered my Rugged Painted Lark had morphed to a mare, Prairi.  My friend Gretch pointed out the obvious, that the second foal from the appy foals pair was perfect for the family.

Intermediaire was held October 14, 2012, in the Farm Show Complex at Harrisburg. This picture is from last year (2011).  I'd had so much fun at MAR in April of 2012 that I thought I'd try my hand at showing some more, and rounded up a string of 16 head.   In the event, I didn't prepare or try very hard for most of them.  After 33 years in this hobby, my competitiveness has worn pretty smooth!; plus, I was judging a division, which would take about as much psychic effort as I could spare.  I entered Rikki in 3 classes, 2 of which were my only Performance classes.   But those two were my great strengths, and it showed. 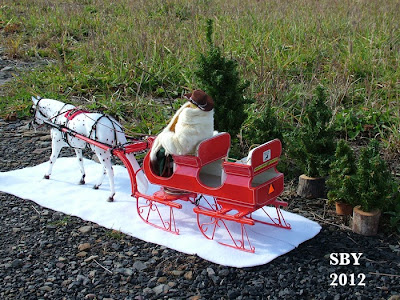 The sleigh dates back to the mid-1990s.  It started life as a Dick Eighmey green bobsleigh.  I rebuilt it so its own mother would barely recognize it, a project taking several years.  The harness is even older, originally built in 1990; however, it still has not been completely converted to gold-filled wire hardware!  The white fleece and fake trees are all additives found over the years. 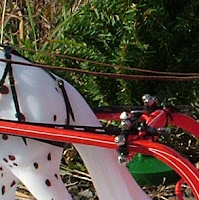 It was a great stroke of luck to have Marcella Peyre-Ferry and her husband Tim, real horse drivers, on hand.  I could ask Tim if there was any trouble with my putting the bells around the shafts like this.  Normally they'd go around the belly but my bellstring wasn't long enough!  He said they were fine and would not bind the traces.  I didn't tell anyone I was covering up a broken shaft bar brace with them. 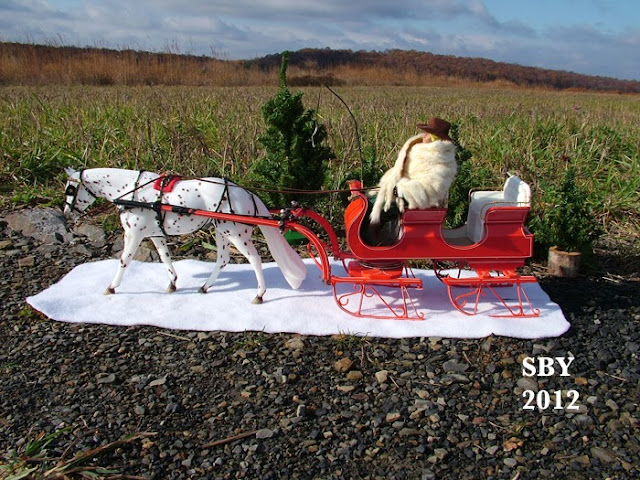 The ermine cloak is something I made from 3 ermines (winter weasel skins) I'd gotten from a special sale at Tandy's in the mid 1980s.  In earlier sleigh entries, I'd pin it in place, but this time I just draped it around Mr Steve, my driver doll.  Steve originated with Lenore & Kim Jacobs, but I've tinkered a whole lot with his hatband, driving lap rope, and whip.  We're talking decades here; he was born in the mid-1990's. 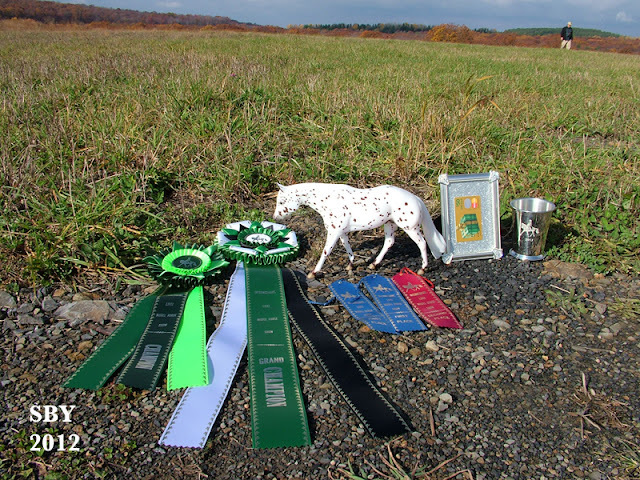 Right about here is where I realized the landscape was taking over the photo shoot.  This was a week after the show.  My husband and I 'collect' strip mines to go birding and hiking on, and though I often take a horse along, rarely are they photo'd.  This is State Game Lands #100 off German Settlement Road, in northwest Centre County.  And that's George coming up along the horizon, peacefully giving me time to shoot whilst hiking.  We lucked out on the weather.  If you wait for PA to have blue sky you'll wait forever.

The second performance class was Costume/Parade. 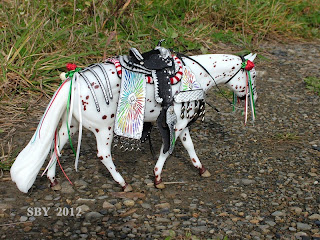 There's probably not much question that the silver Parade Saddle maker's own saddle is going to be hard to beat.  (Rainbow Brilliance, TSII #400, built in 2000.)  What made more of a story was the judge's telling me that the other silver saddle entry was badly adjusted --- corroborating what I'd seen myself.  It had a rider on a fine Stone Bogucki Saddlebred in glorious palomino; but the bridle didn't fit at all.  There were other costume entries as well.

These ribbon roses and streamers date back to 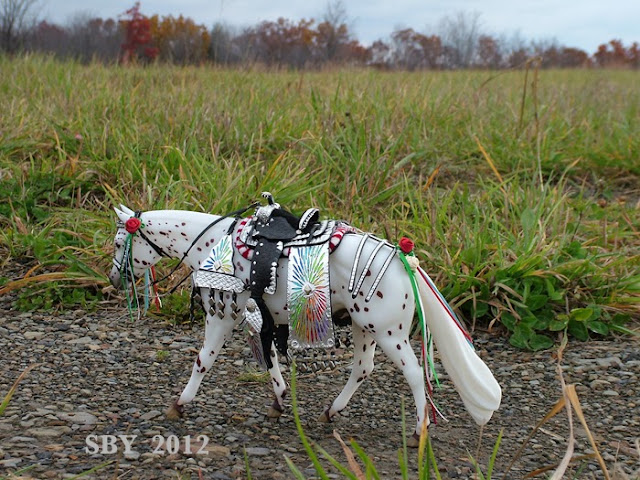 1984.  The ones on the bridle have galv.-steel wire hoops that can be stuck into a browband.  The tail roses are conveniently hiding the fact that the crupper wasn't long enough!  The blanket, a Melody Snow/Unicorn Woman, didn't orignally come with the saddle,... (moment of confession.  I don't normally use stock inventory for showing, but this blanket had been hanging around for years.)  And the bridle and hip drops aren't from TSII #400 at all!!  Yes, Rikki's dainty little head was much too small for the big Rainbow bridle, which had originally been made for Breyer's Hanoverian.  It couldn't be adjusted smaller.  Thank heavens I had other old TSII silver saddles in my collection... like, really older....  This one happens to be TSII #12, built in 1980 and bought back from Liz Bouras after refurbishing with silver tape (it was originally painted-silver).   What luck it had hip drops.   No. 400 didn't have hip drops; but Rikki, with that super long hip and croup that all Zippos have (almost too long, what a habit, d'ye hear me Sommer?!) desperately needed hip drops if he was going to compete in silver Parade.

Notice that some silver triangles have fallen off the fender, from sheer age.  Yet he took first, out of 6.  This triumph led to the Other Performance Championship ribbon.  I was duly impressed; I hadn't won such a nice ribbon since last year at Intermediaire; and before that, since NAN 2008 --  a single Top Ten rosette, given me by a very kind-hearted good friend, who had used a TSII saddle to win it. 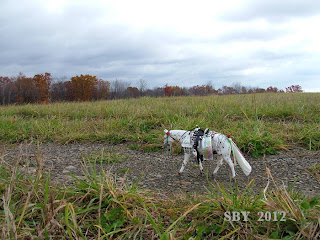 I had a lot of fun at Intermediaire; Rikki was only part of it.  I was showing my other horses and trying to show my moose.  As happened last year [2011] the judge didn't like my moose.  :( 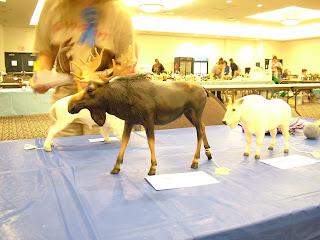 I recall I won a fistful of ribbons with my 16 head.  All but Rikki's were turned back in at the end of the show.  My Del Fuego took a second place out of 21 in Paso Fino; my woodgrain 5-Gaiter took 4th of 5 in woodgrains.  My Kandinsky did not place -- but a Kandinsky won the class!  My two appaloosa Stone Weanlings took 5th and nothing out of 15.  My Precious Stone ISH took nothing out of 12 -- but one just like her won!  My Decorator Fighter took 2nd in Decorator class; the mare that beat him, a Red Roan Running Mare (yeeps, I don't consider Red Roans to be Decorators!) went on to win Champ of that division.  My Akhal Teke took 5th of 6; and Rikki managed to get 2nd out of 30 in his O.F. Breyer Stock breeds class.  I tried a halter on him at the last minute but it did not fit, so left off. 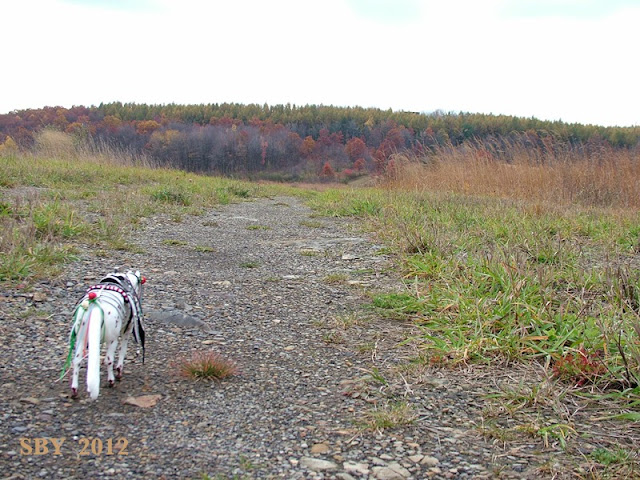 Somewhere along in there, as the three Performance Divisions of Intermediaire were finished (Other, Western and English), and the 10 Halter Divisions were winding up, Rikki was 'called back.'   In hindsight he was lucky to have finished his Halter class (sixth of the ten divisions) because it gave me the chance to plop down a red alongside his 2 blues and his Other Champ.  Then ensued what can only have been a battle royal.  I asked a couple of judges about it later; one of them told me "It came down to writing names on pieces of paper, I can tell you that!"  He was up against some fine remakes and Performance winners.  Yet the gods smiled on me.  For the first time in a decade, one of my horses was declared Grand Champion.

Oh, the prizes!  An engraved pewter cup.  A fifty-dollar gift certificate (this is the FIRST time a horse of mine has ever won money!!)  And the rosette!!  I measured it later:  24-inch streamers.  No other ribbon I've ever won, not in 33 years, measures as long.  The longest previous was an 18.  So you see, taking him up to the Gamelands for a shoot a week later was justified. 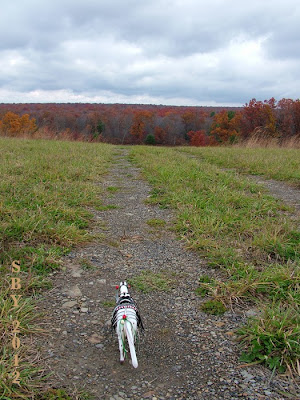 I hope you've noticed that my initials signing the photos have gotten fainter and fainter.  As the horse is getting smaller and smaller, heading out onto the trail, my sense of the fantastic is rising, and the camera is capturing it.  How outre, how incongruous, to go on a trail ride in such rococo finery.  If this is a trail ride a plain working saddle would've been better.  Nonetheless it's just possible the someone would be been using Rainbow Brilliance to take Rikki Tavi across the fields.  But only just.  As I rise -- as reality comes in -- he reverts, everything reverts, and the clean smell of the prairie and rain washed gravel takes over.  This is the land of birds, voles, hawks, deer.  This is a pasture on the verge of winter.  This is a day hovering on turning cold. 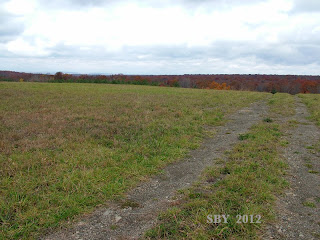 It is also a landscape in the heart of fall color. 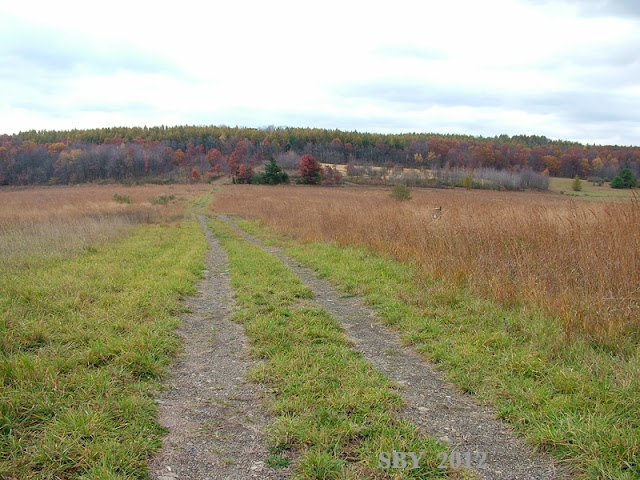 I don't know what that thing in the grass is.  Probably just a weed or bush. 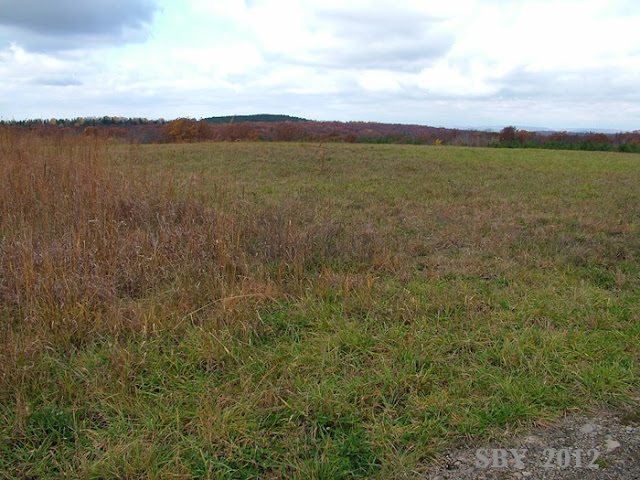 By now my initials have faded to almost not being there.  The wind hisses in the ears. 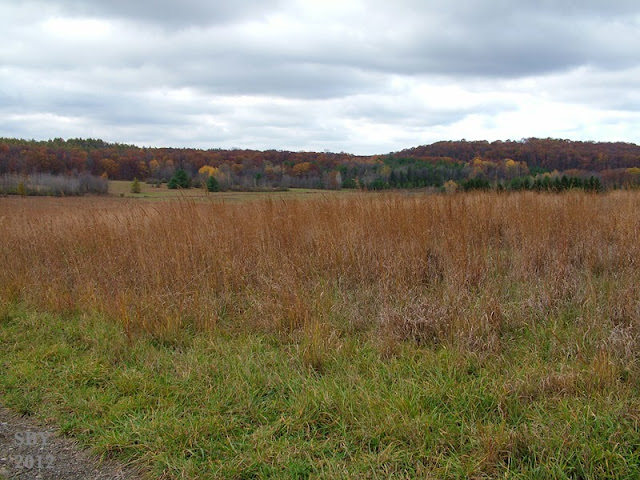