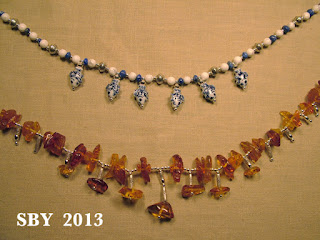 I have often said in every model tackmaker there is a jeweller.  It should not come as a surprise that I make necklaces.  Nor should it be so strange that now, right after the Tucson Gem Show, I am indulging in making necklaces (instead of making tack).  Every artist needs something different every now and then (thanks, Heather, for supporting this idea!) and this is what is calling my Muse right now. 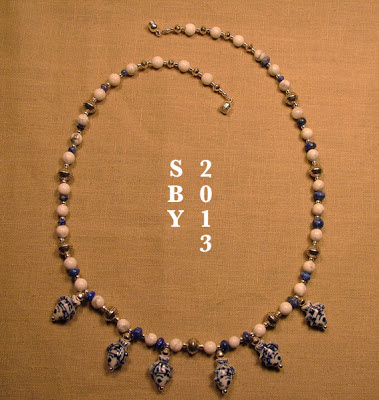 I picked up these clever ceramic fish beads at a previous Gem Show... a few years ago.  I can't remember exactly when; it could be as little as one year ago or as many as three.  (Let's call it two.)  They are handmade and hand painted, so each one is different.  In a fit of generosity I promised a necklace made with them to a friend.  I KNOW that was a year ago -- it has been hanging over me ever since.
The white beads are Howlite, a sort of white turquoise.  The blue ones are lapis lazuli.  The silver beads are just that, silver; they are bench beads, made to look like the old Navajo handmade ones, with Indian-looking key markings etched on the big ones and join-rims on the little ones.  It was only this latest Gem Show that gave me the clasps I used here.  These clasps are magnetic ones.  The devices are new to me; this is the third time I've ever used them.  The first was a simple chain necklace for my mother in Tucson and the second was the bottom necklace shown below. 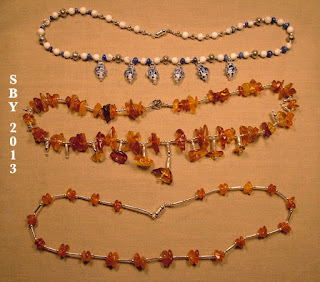 I have made all three of these necklaces in the past few days, the center one last.  The bottom one is a replacement for my favorite necklace, which unfortunately was lost on the airplane flying back from Tucson in 2011.  It looked much like this one.


The story of my necklaces starts in Denmark in 1995.  We were on sabbatical in Roskilde on the island of Zealand.  In the town square, I bought a couple strings of amber from an old Russian man who couldn't speak English.  I remember his inspired method of showing me the price: he drew with his finger on the palm of his hand.  Later I used ferrules from my tackshop and hooks-and-eyes, and put together a pair of amber-and-silver necklaces, a heavier fancy one and a light one.  I wore the light one so much I think the nylon string finally wore through and broke. 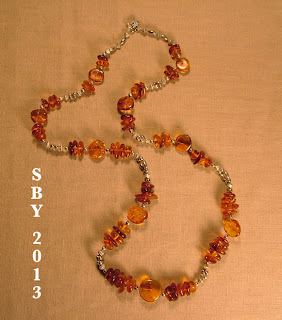 The heavier one is shown here.

The Danish amber was of a superior quality, with tiny circular inclusions which sparkled beautifully, and was polished very smooth.  When I told Dad I'd lost my favorite amber necklace, he surprised me by purchasing another string of amber beads practically on the spot.  Okay, yes, we were at the Gem Show and standing near a booth that sold amber...


So that is where the above two amber-and-silver ones came from.  I have now used up my supply of amber.


I was surprised when I sat down and tried to count up how many necklaces I'd made for myself and friends over the years.  I honestly had not kept track.  No records exist.  There was the dogtooth one for Gretch the vet (she gave me the dogteeth) and there was one or two for Eleanor.  There may have been one for Mom (before the current chain, which barely counts). 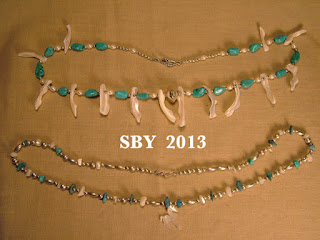 There are these two turquoise-and-silver ones.  If you're getting the idea that I use a lot of silver, you're right!!  I'm quite sure of the date on the top one:  I made it to wear for my sister's second wedding in 2008.  Those long things are mother-of-pearl "frangia."  The bottom one is more of a mystery.  It could be as old as the early 2000s, and the little pearl horse on it is decidedly as old as my high school years.  I recall I got it from a mail-order jewellery catalog source, whose name escapes me now.  I was not much of a jewellery wearing person, but I loved that catalog.  This was in the mid-1970s. 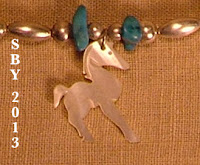 He once had four legs, if you can believe it.  The other front leg was curved and lifted, elegantly balancing out the little guy; but it broke off a few years ago.  The long-lost hind leg was so far back in time I can't recall what it looked like, only that it once was there. 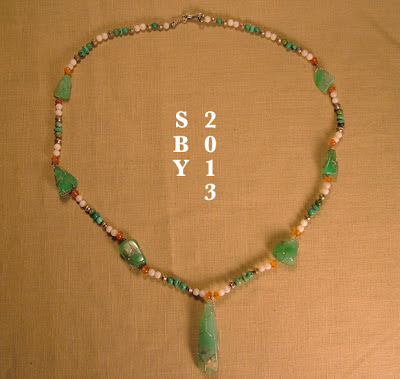 This one is the queen of my collection, the netted-wire Chrysoprase.  The large green stones are D-grade Chrsyoprase, a variant of Chalcedony.  I could only afford D-grade.  Higher grades, up to A, cost hundreds of dollars for this many grams.  The smaller round green beads are green turquoise; the white is opal; the yellow beads are a touch of carnelian; and there is a bit of silver in there too.  I made it to match a dress I had, but I also made it to match itself; I loved the color.  The stones were not drilled, and I had no way to do this myself, so my only choice was to enclose them in a twisted mesh of fine-gauge stainless steel wire.  Hhh mm, this dates it:  I didn't get into stainless until around 2000.  Humph.  I thought this one was older than that -- !!  In any case it goes a long way back, and it has remained my favorite.

I feel nearly through with my current phase of necklace-making.  The Muse is almost satisfied.  I am feeling much more ready to start afresh on tack.  Are not the little bridles a form of jewellery for the model horses, themselves?
Posted by timaru star ii at 8:09:00 PM