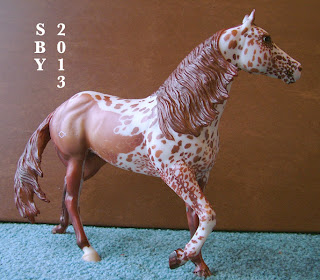 The week in Tucson resulted in many pleasant things, Rinker progress being the most noticeable.  In addition to working on him, I was privileged to visit some of the local model horse crew: Chris, Pat, Leanne and Debi!  If ever I should have to live in the Southwest, I am sure I would be involved with these folks.  They call their shows SPORK because being both a spoon and a fork it can thus cater to every need.  I find this sense of humour only slightly spicier than Region X itself....

For that one week, I broke my Thursday-only vow.  I worked on Rinker nearly every day -- and often more than once a day!  Opportunities came up before breakfast, after lunch, and late at night... and I could not resist.  Notably, opportunities came during long phone calls with my sister.

First, of course, I had to buy a knife.  No travelling on commercial jets with an X-Acto.  The TSA did let me carry my blanket kit -- only after they'd spotted it, pulled it out and scanned it separately!  This for a small pair of needlenosers and a little pair of sewing scissors, both of which fell within the published guidelines for tools (less than 7" long and blades less than 4").  However, the guy was polite, and I managed to show him tack on the horse...  ah, the life of a baggage inspector... 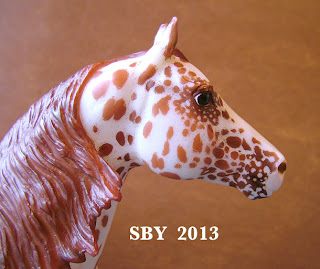 The knife had a #2 blade sharp-point, not the half round I was used to.  A close inspection of Rinker's face will reveal the difficulties I had.  I've known from the beginning I didn't intend to halo, yet using this shape of blade has resulted in nearly that.  I still mean to smoothe these spots with solvent sometime down the road.

The off side of the head and face, shown here, was done during one long phone call.  Imagine holding the phone with the left hand and holding both knife and horse with the right.  My family has repeatedly commented on the little scratching sounds heard on the line while talking with Janet...


I guess I like doing two things at once. 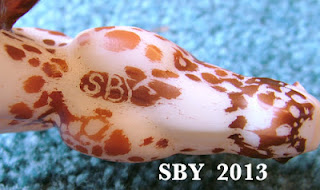 No one has told me about, nor have I ever seen, efforts to sign an etch job.  So I made up my own.


As this project has progressed, my attempts to try out various effects have come to light.  One of the most obvious was the love and respect I had for Breyer's old resist-splash type dappling:  the very type used on the Decorators.  I know academically that such dappling is not seen on real horses.  Certainly not the drips!  Hardly is it seen on Appaloosas, loud as they are.  But on this Appaloosa, I found myself recreating the look and feel of what I have long collected and admired.  I was sort of surprised... but I shouldn't have been.  He is such a voyage of imagination!  Then I found the greatest challenge was to transition successfully from chestnut-spots-on-white to white-spots-in-chestnut.  It wasn't easy.  There were several ways to manage it. 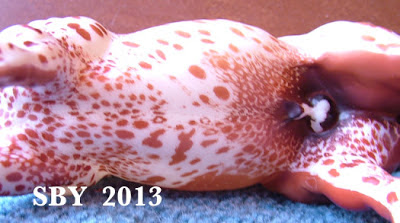 Around the eyes, the muzzle, the groin area, under the arms and especially the offside forearm were places where I wanted to use this effect.   Blending this fantastical idea of what a spotted horse should be with Mudflap's existing spots, and with my dawning awareness of what real Appaloosas look like, is resulting in Rinker's uniqueness. 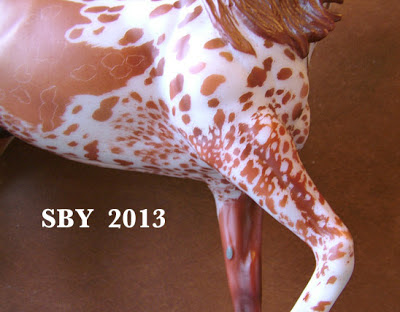 Speaking of Mudflap, the above two pictures best show that I made a mistake, and copied a triple-spot twice. (Many of Mudflap's spots are doubles, that is, two spots set touching each other.)  Look on the offside belly just above [appears below] the midline.  Then look at the still-chestnut area of his lower ribs.  Same spot.  This picture also shows how I'm doing the Mudflap copying:  not all at once, but in sections, hand-drawing in a few spots at a time (with the blade).

To try and copy the whole of Mudflap at once would've spelt sure doom, through inability.

There is another factor in this horse's spotting.  I am fortunate to have a complete collection of Just About Horses magazines (from start to finish; that's 1976 to 2010, thirty-four years' worth, folks), and one issue had stuck in my mind in relation to leopard appaloosas.  It was Volume VII Number Four, from 1980, just about the eighth issue ever published.

Part of the text says "He was extremely loud colored (without overdoing it)."  This was exactly what I had in mind for my Rinker.  I wanted to convey that off forearm, and distinguish my stallion yet further from Mudflap.  This is pretty much my sole "real" horse reference for the etch.   The article had 3 pictures of his off fore and only one of his near, the cover.  How handy.

Note that I did not copy the Sundance horse's neck, nor his face.  It's true I still have a chance to do the offside hind hock.  We'll just have to see.  Rinker has been pretty consistent in telling me what he wants to look like.

Thanks should go to Margaret Loesch who kindly let me photograph her Mudflap from every possible direction.  For those who cannot find his offside, here's a glimpse:


Obviously we're not done yet.  But we're past the halfway and the end is clearly in sight.  I am very much enjoying this journey, and look forward to not only making tack for him, but possibly cutting other appys.  See what refusing to paint horses for 30 years has fostered.  Whoever invented etches, I owe ya one. 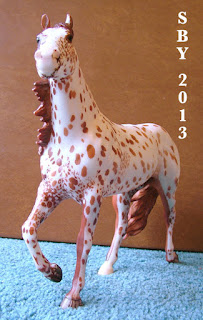