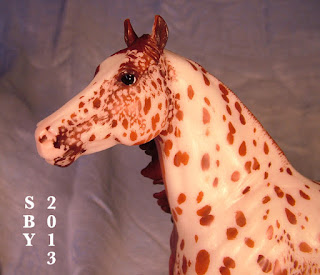 Isn't it amazing how old familiar phrases can acquire new meanings.  Take the words Half Appaloosa.  In our world, one would naturally think it meant a half bred horse: one parent an Appaloosa.  But now look at what I've been looking at for the past 3 weeks. 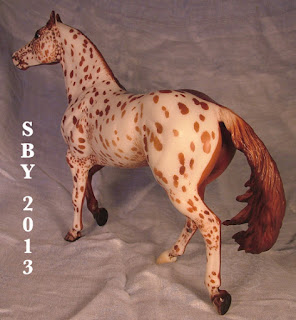 Over Christmas, with more pleasure than I ever thought possible, I have pursued the etching of Rinker.  He started out Mudflap Envy, it is true...  and every spot on Mudflap is here represented, to the best of my ability.  But as my skill grew (though still not anywhere near some I have seen), those Breyer spots began to conflict with my plans more and more.  I was surprised by what this horse was telling me.  Mudflap Inspiration would be a truer name.


Over and over again, I said to my travelling companion:  I have seen thousands upon thousands of model horses; I have photographed hundreds upon hundreds of them.  But I've never seen anything like this.

He actually thinks I should leave him as he is now, Half Appaloosa.

Alas, to me that's not an option.   But I surely am enjoying his uniqueness at this stage.

Why is there only half a horse?  Surely the skill of the etcher, having departed so far from Mudflap, could encompass the other half?   Look at that face, that shoulder. Some of the spots of Mudflap are too big and of the wrong orientation for what I am increasingly thinking of as realistic roaning.  But I wish to remain true to my original intent, which was to cut a copy of the Lone Star Special Run.  And ha-ha ho-ho, the only pictures I've been able to secure of Mudflap have all been of his near side. 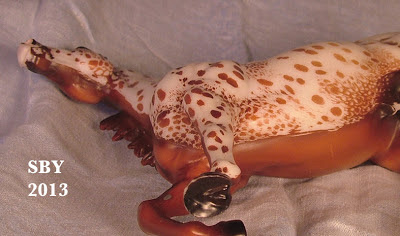 I am particularly proud of the groin area etching.  It was done early, before the shoulder.  There's no explaining these things.  They have wills of their own.  It almost looks peacock-inspired, with curls and loops and scales.  I am doing all this work with just a half-round knife.


It's the romance side of the horse, in carousel terms. 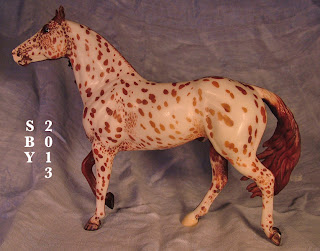 "Loud" is another word that consistently echoes in my head, whenever I look at this horse.  Loud, loud, loud.  I didn't really intend quite this level of loud!!  But what the heck.  He's a dream come true.  I probably won't be passing this way again.   I have wanted one of these, and he's grown in the making.  To make tack for him will be, again, a dream come true.

To all those people who list Mudflap as wanted on MH$P:  wouldn't a one of a kind be more fun?