3Ms and a Bosal 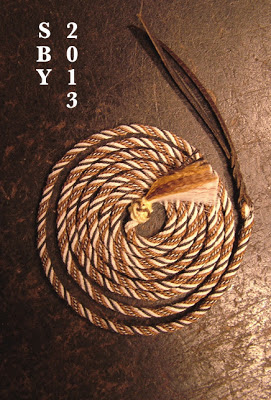 The 3 Ms stand for K. Moisan's Micro-order Mecate.  At this point in my career, I've made a lot of mecates, and the only way to distinguish them is by their owner:  the person who ordered them.  Most pieces of my tack are referred to by their original owner / orderer.  Only a few pieces make it to "name land" and have their own specific moniker.  But don't despair: in the course of 2012 I made another piece of tack I labelled HHH (Heli's Hitched Horsehair).  Living in the early 21st century makes you an expert in crafting headlines whether you like it or not.

This mecate is part of a micro-order which was started 1211.29 (that's November 29, 2012; you guys're gonna have to get used to my dating system), and finished only yesterday, 1301.10.  An earlier picture of it is on my main website.  It originally had a red-brown popper.  Learning, always learning:  the request for a different popper taught me that this area of my mecates, the 'turnover' in the center of the spin (therefore the end of the rope) is not as ignorable as I'd hoped!  I used to struggle to braid or spin it; it's less than an inch and you don't see much of it.   Then I thought I'd just ignore it.  Several mecates later, I see I should just go back to spinning or braiding.  At least this one escaped without too much damage... 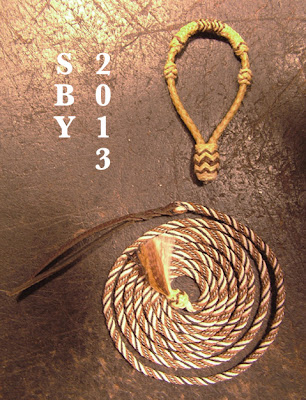 The order includes a bosal.


As told on my main website, the bosal core (frame) was made in the Safelite Auto Glass foyer in Fayetteville, South Carolina.  This merely proves Sue makes tack on vacation -- it's the ultimate portable hobby!  The nosebutton foundation was begun while still in Florida.  On the way home I reached the nosebutton interweaves, having already done the sidebuttons: they were easier.  My recipe for bosals, having been tuned almost 2 dozen times, is reaching a state of stability.

The procedure is simple and organic:  start with the nosebutton (end cores, foundation, body, interweaves) and extend to the sidebuttons (ditto); then bend the frame, and tie the core to the heel knot.  Then, do the heel knot.  Last of all, finish with the end concho.  Basically I sweep downwards from top to bottom.  The end swells to the nosebutton are the exception to this general order.  They're small but must be done first.

When I think of how I used to make bosals with the frame already bent and tied, I get the shudders.  Thank you Gail Hought for opening my eyes.

I see I'm using the word 'core' to mean two different things.  'Bosal core (frame)' refers to the wire with braided sinew around it.  This core is the tennis-racquet-shaped thingy.  'Core to the heel knot' means the groundwork (in Hought's phrase) or base to a button.  Any button that is rounded and sticking out more than its own threads' thickness has got a core.   It is inside the button.   You might think I'd use the word 'foundation' to refer to this core.  Nope!  Foundation has a very specific meaning:  a braided button (here, a long tube) which forms a framework for later additions of interweaves.   Larger and longer buttons are made with more strings, not with the same string added back in...  except in models, that is, where you can get away with such a trick.
Oh yeah, I could write a book! 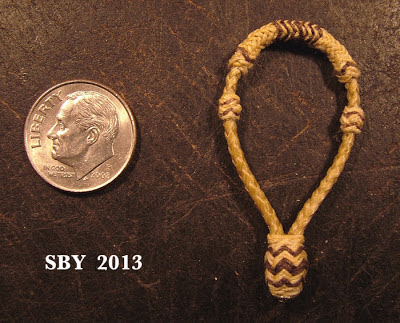 This bosal was a portrait of a real one.  It was relatively simple with only 2 colors, rawhide and a contrasting dark brown.  Last year I had made 3 bosals, two with multiple (3 or more) colors and one without any (pure rawhide).  This one, then, fell between.  Just make a straight rawhide one and stick in some dark brown.  As it turned out, this one has 6 nosebutton interweaves while my 2012 ones both had 5.  Five and six rings are the 'sweet spot' at Traditional scale.  Four or fewer and the eye can count them.  It looks like deliberate restraint.  Five, and the eye cannot count them; an optical illusion occurs, and it looks real (the real ones range from 11 to 15).  Over 6 and the math doesn't work for me; it gets even more difficult putting them in -- and it's hard enough as it is!

You can probably tell I'm switching over to telling more and more here, on the blog.  The main TSII website will still be home to longer essays and stories.  For instance, right now I'm planning to introduce our next saddle there.  And, as always, our latest Orders news can be found on our Tack Orders page.
Posted by timaru star ii at 8:14:00 PM