The best place to start is where your heart is.  Here's one small attempt to break up my blogging logjam.  There are 5 new pins in my collection, plus a most interesting piece of Mink merchandise, the Ice Cream Bowl.  I have many other subjects to write about (blogjam?!), but this is the most colorful.  Pins are, I'm coming to realize, where my heart is right now,... although tack will always reign supreme, and is just around the corner! 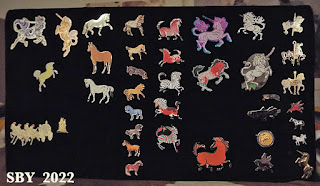 The new ones are the two Celestial Unicorns (upper left), the Cinderella coach set (lowest left) and the third-one-down Carousel horse in the upper right. 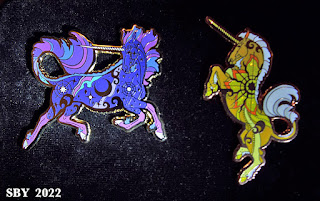 They are, as Sarah claims, unlike anything she's done before.  And yet they are so her.  The moment I saw their stickers, back in June (June 30th, the day my husband retired), I knew I had to have them.   There was an elegant simplicity, a sparseness of riches and purity about them, that instantly appealed.  One more automatic collect!  Ah me, as I said to another pin collector, Sarah has us by the short hairs...

Looking at my collection as a whole, I'm struck by the similarity between Ayerron, the Celestial Sun Stallion Unicorn, and my old brass unicorn in the lowest right corner.  Across decades, this pose and this breed, even the color and gender!, are the same.

Here are two shots of Ayerron, trying to capture the sparkles inside his big shoulder flower and hooves.  It's almost impossible.  I lowered my camera's light exposure to its bottom and then held my mini flashlight in my left hand, trying to pick out the glitter.  I know from decades of trying to photograph laser-flash holographic tape (prism tape) that you must start with very low light.  But it still is hard, and shaky hands do not help!  Ayerron's coppergold metal shows up very well, but his sparkles really are not that green.  I think the green is an element of his yellow and this method of shooting enhances them. 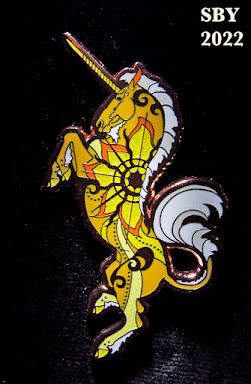 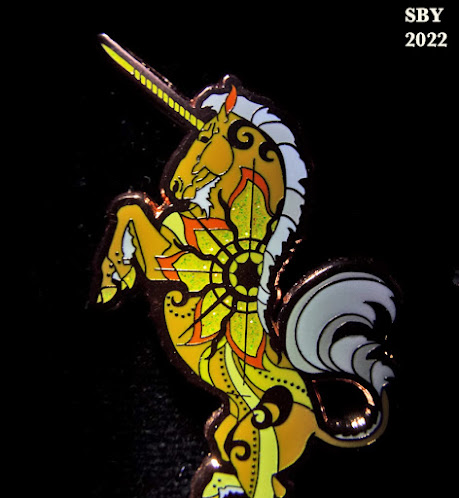 Now I hope no one would mistake me as a critic of Sarah's work.  I love all her stuff.  Yet Mystashani is one of the very few times I think I could suggest an improvement in one of Mink's pins.  The original stickers show this Lunar Mare with a white Moon crescent on her side.  By the way don't these stickers show how wild the ride is for a collector!!  What else could accompany a pin order of Celestial Unicorns, but their stickers?  But who could have predicted they'd be so different?!  My second stallion sticker was a half inch taller and the mare was a different color, much lighter! 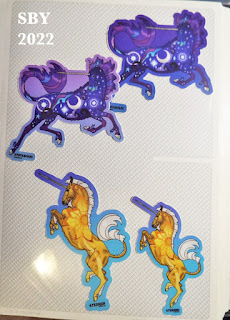 Possibly for reasons of affordability, or for other reasons, the pin Mystashani's defining Moon came out the same silver as her border curls rather than the glitter-white of her hooves and stars.  It made me think about inescapable constraints... 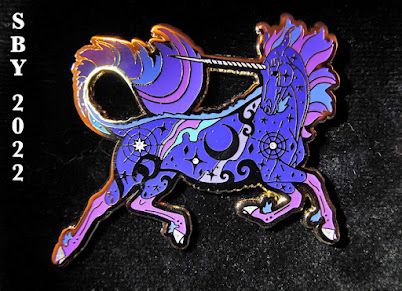 Her own border metal is silver, of course.  Somehow these photos make it look gold, and indeed gold goes well with purple, just as sometimes the Moon has a golden glow.  But it is really silver.  Shooting pins is challenging...  Maybe I just have to catch the reflections right.

But collecting them is endless fun.  What should turn up on eBay but a match to my other 2 decades-old mini-conga of Carousel horse pins?!  Despite having carousel fever for the better part of 30 years (if not for life, hah!), I had not known it existed.

It is not exactly the same style,... no letters of the company such as are on my first two ("S&G", "PTC"), no loop on the finial.  But it satisfied every one of my collecting parameters.  Astoundingly, it had never been removed from its original sealed plastic. 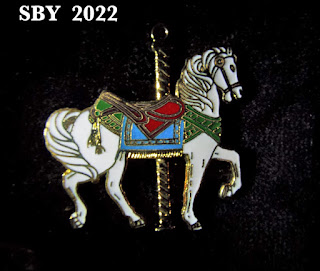 When you find something that exactly matches your collection but you didn't know it existed!,... you're in trouble.  :)  How many others are out there...

I'm trying to focus on horse pins that appeal to me, that have a high level of detail and realism and are well executed.  Animation is an obvious target because the way enamel pins are made emphasizes line art and pure-colored spaces.  The intersection between realism and animation is large, and here I must rely on my own desires to keep from buying everything horse-shaped I see (or even cute-animal shaped!).  Why not the portrait of Maximus from the movie Tangled?  Why not most of the Breyer pins?  Because I don't like them, that's why.  I only collect what I like.  The problem here is even such controlled things as my desires are so likely to shift, to evolve, to morph... We have a track record of hundreds of model horses... That collecting experience can only stand me in good stead.  I hope.

I spent several weeks trying to decide about, and then to purchase, this gem from an earlier time.  The seller was hard to contact. 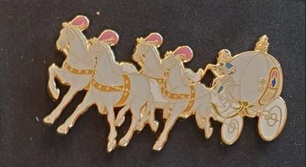 It turned out this was a set of 2, and ipso facto, I had to get both.  The second pin is the castle and can be seen in the group shots.

Now let us move on to the Bowl.

The Ice Cream Bowl came along right at a moment when I was realizing I'd passed up a bunch of chances on Mink's Dancing Horse pins.  I was reasonably flush (at that time!) and I'd never seen anything like it (are we just going to wear out this phrase?!).  Mink has offered a lot of stuff over the years, and I'd turned down drinking glasses, tree skirts, blankets, socks, water bottles and who-all knows what-else useful items, so why did this grab me?  Hard to say.  I cast around for a use for it --- it would not fit in the kitchen cabinets.  And then I knew.  I needed a better place for all those pin backs and cards that have been accumulating along with my growing collection. 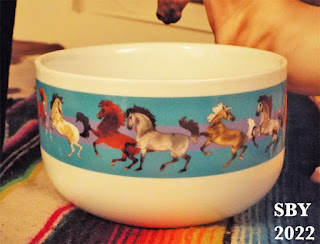 This bowl is really a mug;  it has a handle on the side you can't see.  Not a problem.  This may be my only way to possess a Sayida (the chestnut appaloosa Dancing Horse). 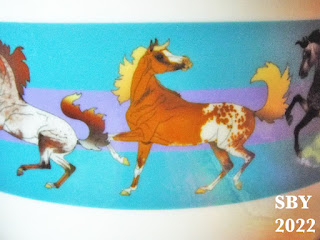 When I know them by name, that's a sign.  I'm smitten.