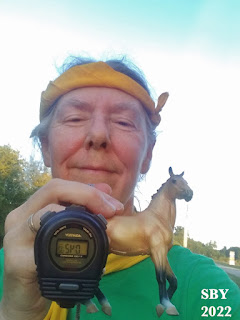 This is a very long post, covering 4 days (Tuesday, Wednesday, Friday and Sunday), and having 28 pictures.  It was my husband's idea to run the BreyerFest 5K race virtually even though I was in Lexington.  This move was brilliant.  Not only did I ultimately turn in a swift time -- the third fastest of all my BFest races, only 1 second slower than my second fastest! -- but I found a lovely place to enjoy during a lovely hour of the day.  I went there four times and ran 3 5Ks over BreyerFest week; and each time was a great refreshment of the spirit.  Running gave me a chance to get out of the house (I was in a hotel room most of the time), and, hey presto, I didn't have to wear a mask.

The first time I saw the course in person was on Tuesday, the day after I arrived in Lexington.  I was very eager to walk it, and took lots of pictures.  This was during the middle of the day.  I was using my Fuji camera and not my smart phone, a choice of some import later.  Up to then all I'd had was the satellite printout: 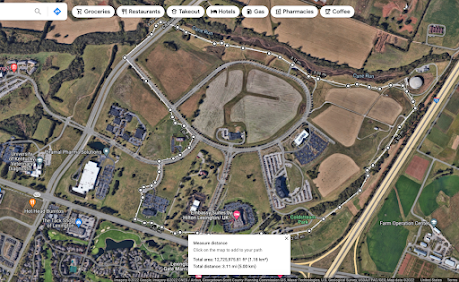 You can learn a lot from the satellite view, but there's nothing like really being there.  The next 11 shots are all from the very first time I saw it.  This first pic is at the Coldstream Park parking lot, on the east side of my course. 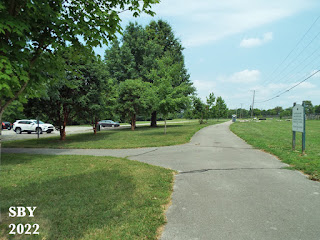 My chosen course utilized part of the Legacy Trail.  This is a bike trail which goes from the Kentucky Horse Park to downtown Lexington, a total of 12 miles.  It honors various Black jockeys, horse trainers and breeders of the area.  Despite this picture, it was not a canopy trail [trees did not meet overhead]. 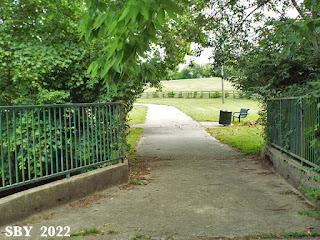 I was careful to document places where I'd have to choose the correct turns.  Here I needed to fork right. 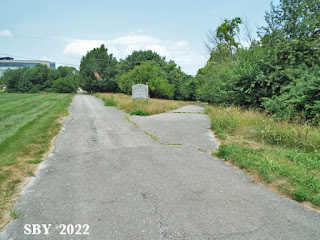 There were 2 ponds along my way.  This was the larger, and it had cleaner water, plus a fountain. 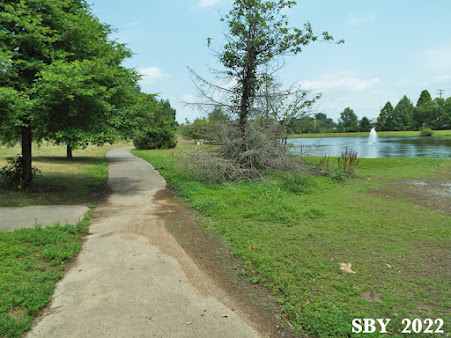 It was also the one with the geese. 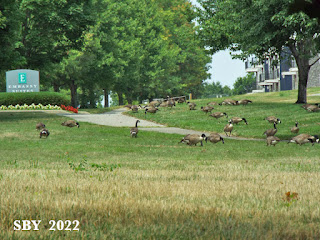 I was a bit worried about the geese.  However, my fears turned out to be groundless.  They would get out of the way,... and dodging their leavings was not as distracting as I'd thought.
There were three traffic crossings on my course.  This was one of them.  I had to go straight across this 2-lane road, not following the path's obvious curve here.  I was fortunate; cars were not a problem, mainly because I was there so early in the day. 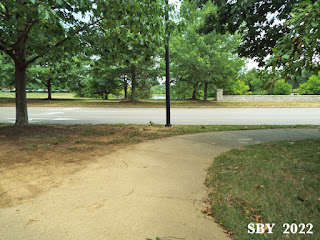 There were some truly lovely stretches along my course.  The stone walls of Kentucky are famous. 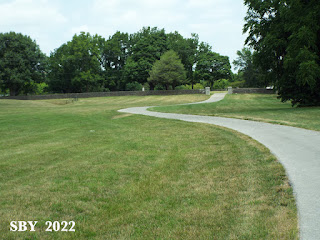 Near this place was the grave of Bull Dog (Teddy x Plucky Liege).  The grave had many open acres to itself, amazing in so busy a city. 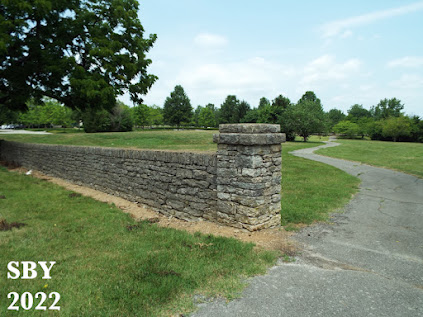 This place was a campus, Coldstream Research Campus of the University of Kentucky.  It had a mix of buildings:  hotels, businesses, research offices, corn fields, open pastures and the odd park.  There were also historical remains of earlier buildings. 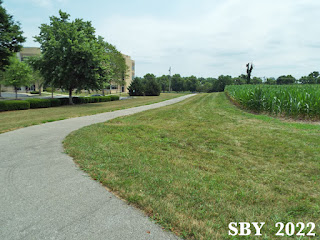 Towards the middle of the course, I found a cool mansion-looking building.  I discovered later it was a business headquarters. 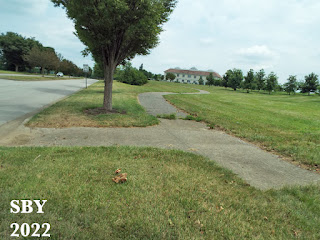 It was built in imitation of Kentucky colonial styles, I think.  For some reason I loved it. 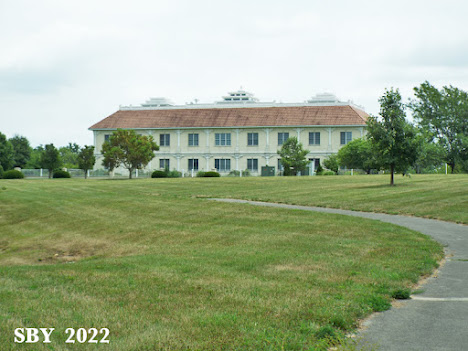 This was my race's starting and stopping point.  This first run was intended to just get through the course.  Near the end, I found a third pond, with many impressive marsh flowers. 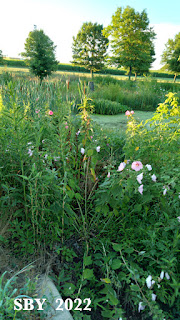 The sun had risen. 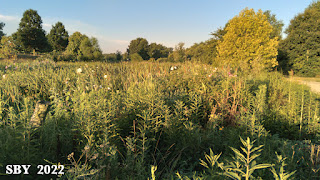 True to cell phone custom, I tried to take selfies.  Those who know me should be properly impressed that I've come this far in FB etiquette.   I had forgotten to take my glasses off when running (hilariously, I forgot to take them off for all three 5Ks) and my face was so hot I was fogging. 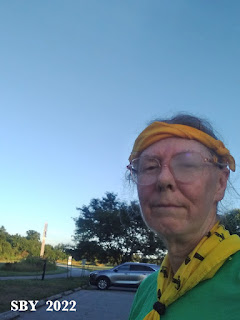 Below is the shot I posted on FB as my first selfie.  The sun rays around the head perfectly capture how proud I was of myself, yet still very shy.  Alas, my stopwatch, carried in my pocket, had been accidentally stopped during flight, and I had to rely on my wristwatch for this Wednesday run.  This time is an estimate:  minutes from the wristwatch, seconds from the stop watch.  45:15 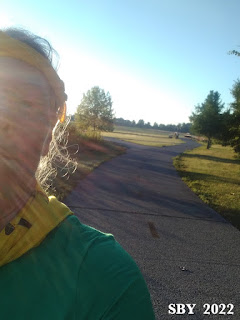 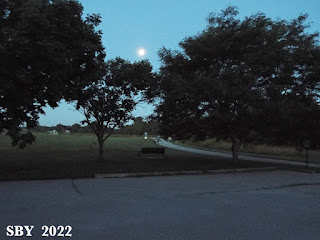 Incredibly, there was a full moon.
Even more incredibly, someone had painted a bright neon-orange starting-line on the trail paving!!  This was fantastically useful but made me worry that a real race would be held here,... A few bikers went by, but there never was a crowd, so I lucked out. 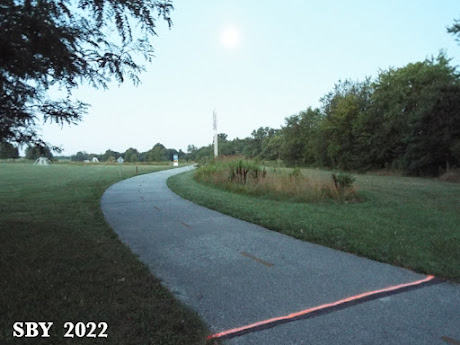 Friday my goal was to keep myself in shape.  I try to run every other day, usually varying between 2 1/2 and 5K.  But here at BreyerFest I was at peak form and felt that running the full 5K every other day (starting Weds.) was within my grasp.  Even so, when I started on Friday I did not say, This will be my race.  I just wanted to get around sound.  The air was deliciously cool and I felt quite safe. 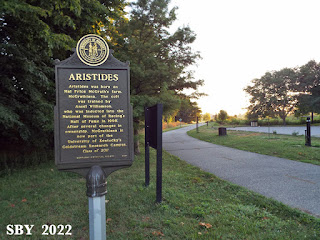 Aristides, the first winner of the Kentucky Derby, was born near here.
This picture proves that I had my Fuji with me on Friday and recorded my run time.  It would have been immensely useful to've known that later!  In hindsight, I think what happened was that I forgot I had the download cord, and didn't realize I could get pictures off the camera and into my Chromebook, my BFest computer.  Error number one. 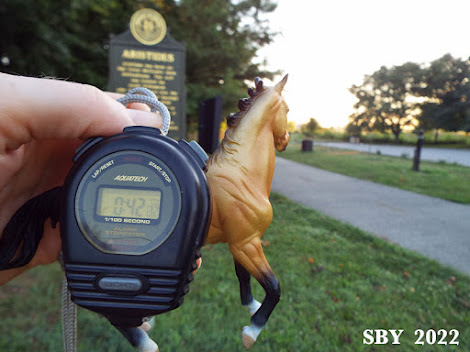 Tachyon the Racing Akhal Teke was always with me during BreyerFest runs.  :)
Instead, I contented myself with smartphone shots.  And here's error #2:  I hadn't yet figured out how to not make them come out backwards [flopped]. 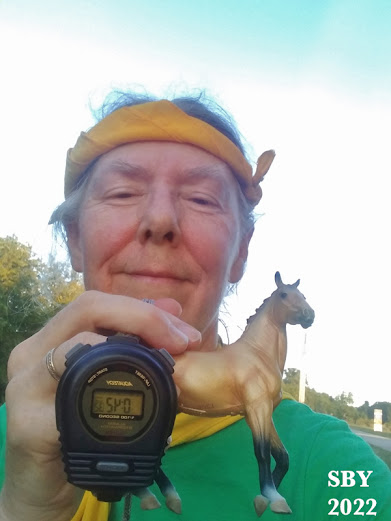 Doesn't that look like a 45?....??....
Somehow, without looking at this picture too closely (nor the above Fuji shot!), I got it stuck in my head that I'd run 43:32.  All Friday morning I was chanting to myself: forty three, forty three!  It is written in my Notebook for Friday:  43:32.  Where did this come from?  Error number three:  The last time I'd run a 5K before I left for Kentucky, I'd gotten a 43, and I remembered.
I struggled over whether to submit the 43 as my official race time.  Virtual runners are allowed to submit any time during the week, up to the noon Sunday deadline.  I was bound and determined (as determined as I was to get in my reservations for 2023, dang it!!!) to make that deadline, preferably by a wide mile.   Sometime during Friday I argued myself into submitting.  The 43 was pretty good under the circumstances, I was desperate to submit early, and I half-hoped, half-gambled I'd be able to change it later if I did better on Sunday.  And how did I know I'd even be able to do as good again?!  BreyerFest is not the best place to keep oneself in top shape, especially as the week goes by... !  and the spectre of Covid was always hanging overhead.
So I went through the steps of submission.  In the process I discovered that my time had been, not 43:32, but what looked like 45:32.
Oh, no...
Gritting my teeth, I submitted anyway.  This race time was only 27 seconds slower than my 2017 BreyerFest race.  Thoroughly flustered and taken aback, I yet clung to my dream, to run in all the BreyerFest races and turn in decent times for my age group.  I had some consolation when I looked up race results later online and discovered I was in fourth place among all virtual runners [at that time of the week].  That was cool.
**********************************************************************************
SUNDAY
July 17 was the Strudel Sprint for everyone in person.  I heard they had a good race.  (I saw that Stephanie Macejko placed well.  No wonder Breyer holds a 5K!  Go Steph!)  In a burst of happiness from my largely successful BreyerFest week, I was out running early again.  This time I clocked 43:07.  The Friday time had, indeed, been my race. 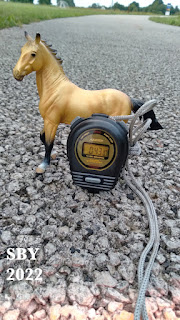 After running on Sunday, I comfortably walked back over part of the course to take a picture of a unique feature, the decorative medallion in the middle of the trail.  It is a little past the Citation Boulevard bridge: 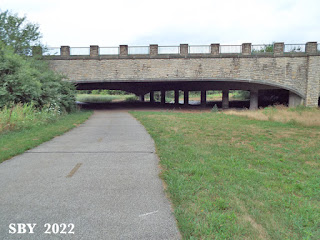 which is the only place on my course where I go under a 4-lane highway.  (Discovering this underpass had a lot to do with my choice of course.)  Just beyond it was a surprise. 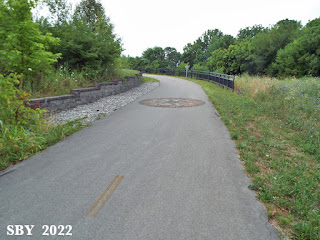 I can't think of anywhere I've been where painted medallions appear on sidewalks.  The edge was grooved into the surface. 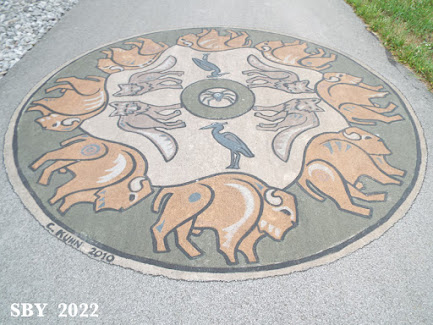 So cool!
My last Coldstream photo shows one of the two groups of flags on this portion of the Legacy Trail as well as an information sign about it.  This feature has been in the background of my selfies and can be seen in the photo of the orange starting line. 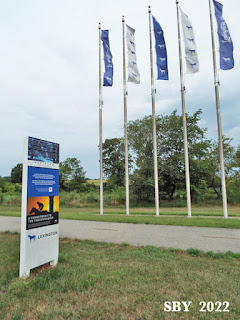 It was somewhere on Sunday morning that I tumbled to the truth.  Somehow, I'm not sure when, I had gone through many (unnecessarily complicated!) jumps to get a copy of that 'win photo' onto my Chromebook.  That photo was backwards, therefore the 45 was backwards too.  It hadn't been 45:32, it had been 42:32.  I had a few hours to email the guys at 3 Way Racing and correct my error.   I did so in smooth desperate efficiency, attaching the photo and emailing them using two different places on their website.  I'd been a fool, but an honest one.  I was so relieved to get a reply from one of them that my error had been corrected.  Thank you 3 Way!!!
Not only that, but I'd done amazingly well.  I'd placed first in my age group.  That had never happened before!

I look forward to a time and place where I can finally run with the crowd again.
Posted by timaru star ii at 9:28:00 PM