This is Part II of IV about restoring a 35-year-old model Western saddle.  It will be concerned mainly with the fenders.  Part I introduced things, Part III will deal with the seat and cinch and Part IV should show the finished set on two different horses.  This whole series is a perfect example of how a simple polish-&-update job galloped off down a rabbit-hole into a four-part series on how I made saddles back then... !  Enjoy.
Having finished restoring the back cinch of TSII #89 (Part I), let's move on to the fenders and stirrups.  This post will also deal with girth rings, stitchmarking and signing.  Fenders and their accompanying straps, buckles and keepers are (in my opinion) one of the biggest make-work parts of a Western saddle! and they're just like the back cinch.  To access the fenders, I had to take the seat off.  I'm saving the seat for Part III, so that's where its taking-off occurs.  Here, we will just show what's underneath the fuzz lining.  Peeling the fuzz lining off the base plate is one place where force must be used.  I just rip it off, leaving its front part still attached to the saddle.
This amazing picture shows many details.  The two dark spots are the third-point concho strings. 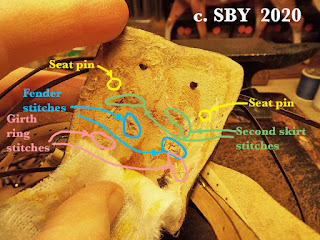 It is difficult to distinguish the fender stitches from the girth ring ones here, but their thread is in two different colors:  it's lighter natural for the girth ring and darker brown for the fenders.  The color is better seen below.
The fuzz lining was originally glued on with Ambroid; later in the restoration it will be stuck back down with Aleene's or an equivalent white glue.
Here the fender stitches are being cut and the fenders pulled off.  I picked out and discarded the thread of the stitches.  A lot can be seen here:  it's the topside of everything labelled above.  Much to my surprise, there was an untooled leaf on the second skirt!  I must've thought that since they couldn't be seen, they didn't matter.  I could not resist tooling those little suckers the 2nd time around...!  I also tacked down the front corners of this part, the second skirt, with more stitches.
You can see the registry number, 89, in its customary place, just under the offside fender, on the base plate (bottom skirt). 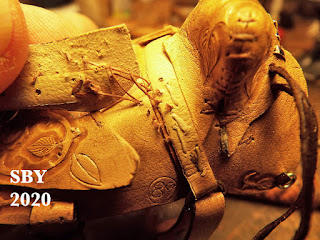 This shows disassembly of the near fender.  That sounds worse than it is.  There's only two buckles to a fender: the fender keeper and the larger stirrup strap.  All the leather should be oiled, that is, treated with your favorite leather preservative or dressing.  Do what you can to keep the near stirrup with the near fender and the off with the off. 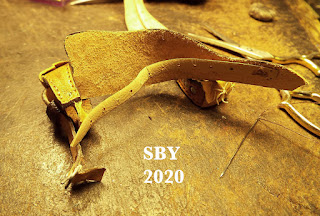 Here are the fender keeper straps, which go around the fenders just above the stirrup.  This is not the same as the stirrup strap keepers, which are located higher up when fastened, on the inside end of the fender, and are concerned with height of stirrup and length of leg.  (The equivalent of Blevins buckle keeper in full scale.) (Visible above, just left of the stirrup.)  I'm positive I have not consistently used these terms in my tack Notebooks, sorry!
Cleaning off the white guck after unwiring is as simple as wiping the lace with a paper towel.  Stash the old hardware somewhere else.  I suppose I'll eventually throw all mine out.  I've amassed quite a collection since I started restoring saddles, but I honestly don't know what to do with it.  Nickel or chrome plating would be great, but I've never heard of plating onto galvanized... 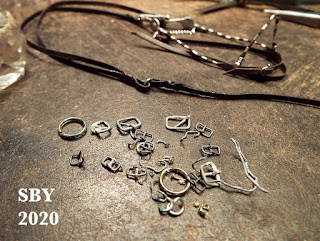 Below we see bright new buckles being sewn on.  These are 24ga stainless steel wire.  Handmade buckles suit me:  they're cheap, fast (mostly) and the ultimate in customizable, plus they give a signature feel to the piece. 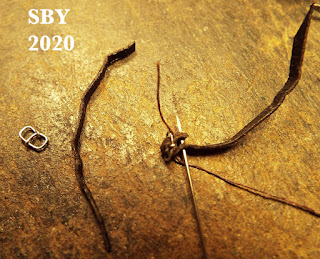 A bit of personal preference here:  This is a great chance to cut the strap tips more professionally in-scale than a cheap quick ugly straightacross angle.  The old one is on the right, the new on the left.  Smoothly pointed straps go through buckles more easily, too. 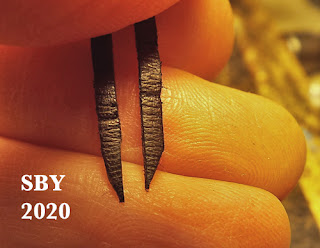 Girth Rings
When the fenders came off, the girth rings appeared in the queue of stuff to be dealt with.  I used split rings, then as now.  They can be taken off without cutting stitches, but this requires dainty handling; I might add, strong fingernails.  The old rings were 8mm and brass; I wanted 10mm and silver-color. 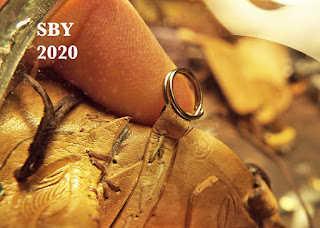 This is the tie strap, or latigo as I sometimes call it.  This is another case where my notes do not always use the same term; I also call it the cinch strap.  It has to be taken off, unwired, cleaned and oiled and the ring replaced. 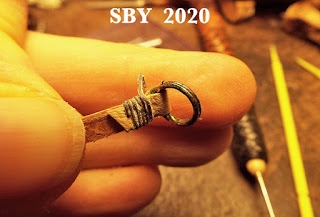 Sewing the join.  This is my medium-size glover's (triangular) needle. 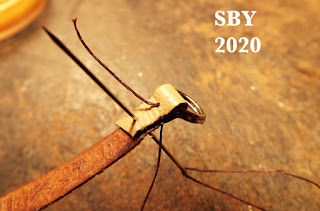 Signing
This is a good time to decide about signing.  Here is my answer as to how to indicate the saddle was extensively restored and rebuilt without ruining the original signing.  "SEB" (dig that almost-cursive) were my initials when the saddle was made:  Susan Elizabeth Bensema. 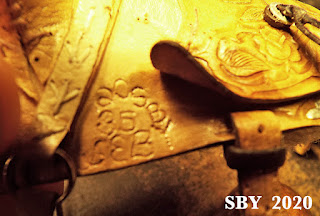 I'm just going to trust that the world knows it's 1985 for the 85 but it's 2020 for the 20.
Stitchmarking
I chose to stitchmark every part of the saddle that didn't already have it.  Back in 1985 all I had was a pounce wheel, probably from a graphic arts store, as part of my college degree in drafting.  TSII #89 had its breastcollar chafe, stirrups, back cinch and back cinch billets stitchmarked with this.  It made for big, deep, widely spaced dots.  Sixteen years later, in 2001, I invented my own miniature stitchmarker (after several tries), and its use has become standard practice in my shop.  This touch of refined elegance is not much visible in the photos, but in person it makes a difference.
When the fenders are reassembled, it's time for one of the fun parts.  I hate to admit it, but so many of my early saddles hung their fenders too low.  It's a subtle but characteristic mistake, probably resulting from paying too much attention to the tooling and not enough to the saddle proportions as a whole.
Positioning the fender is done by eye.  Can you see the difference?
These shots were taken before the seat was reshaped.
Starting to sew down the finished fender.  The job takes my biggest glover's needle.  Note my two unmatched clips holding the fender, a little clothespin and an orange plastic clip with a rubberband. 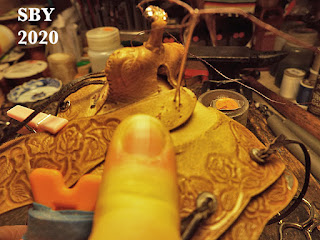 What it looks like underneath when done:  that dark brown stitch patch in the center of the base plate is the near fender. It sits higher than last time! 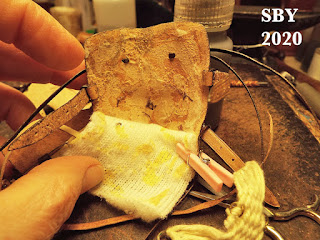 That glorious moment:  Did I get the two sides to match?  Symmetry in model tack really matters to me. 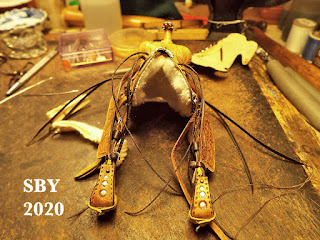 A view from above of the finished fenders sewn on.  This central hump of leather has the potential to provide a sort of grounding or base for the seat. 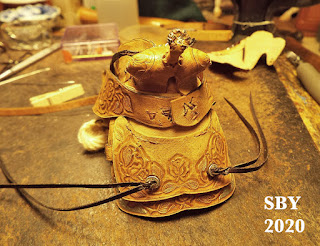 Another vision of the finished product before we depart for Parts III and IV.
Posted by timaru star ii at 10:48:00 AM