How I Beat My FOMO 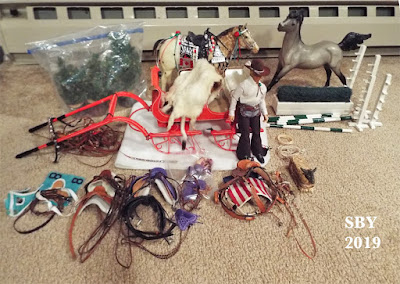 Beating Fear Of Missing Out is no small thing.  This might be one of the last posts about The Jennifer Show 2019, and THAT was a big thing -- very big.  How to bridge opposites is a pertinent question.  How did I bridge between generations, between haves and have-nots, between greenhorn newbies and old pros?  How did I manage to attend a show whilst I was over a thousand miles away?  With model horses and their gear -- and a big dose of trust on both sides, -- that's how, -- and of course, with the ever-more-personal and ever-lovin' Internet.

The story begins with my reasons for not attending TJS.  These were multiple.  I could have gone, I confess.  I was not physically restrained by injury; I could have afforded it, both in money and (in theory at least) in time.  I could see it coming, and ....  squirmed.

I had gone on a 2-month family trip (May, June), which included Canada(!), and later gone to BreyerFest for 10 days (July) which had packed quite an emotional wallop (the hotel refused my next year's reservations!).  August had seen the Model Meet-Up day (which also walloped me: A Driving Adventure).  In late September, five days (25th-29th) were the chosen time for our Three Rivers canoe trip to Virginia.  To put it frankly, I was tripped out.  Yes, I had parents in Boulder; Front Range room and board was mine free if I wanted it, plus a car.  But in late August -- the last possible time to commit -- came word that my folks were shutting up the Boulder house in preparation for their fall migration to Tucson.  Mom actually said, Don't come.  I teetered.  I sampled the psychic winds of my soul, and realized that while I'd love to go for social reasons, I just wasn't a competitive shower and hadn't been for years.  I'd had 3 visits with Colorado model people during May and June (instead of the usual 1 or 2).  A four-day car trip one-way, or a flight (expensive so late, never taken for only a show), was just too much to ask.  The moment of decision passed me by.
Having chosen not to go, I was seized with the most terrible FOMO.  Possibly this was my slender stock of prescience, foretasting the future, guessing how fantastic that show would be.  It turned out truly legendary, by the way.  The show was a unique landmark, never to be forgotten;  it would be referred to as a historic milepost of greatness -- proving prescience does exist.  :)  Also, the habit of Internet following was expanding -- vicarious enjoyment was becoming more of an art.  I knew so many of those who would be there!  Whatever the cause, I writhed in helplessness much worse than usual.  I needed a brainwave.

Nothing less than ElfQuest helped me then: that scene where Cutter breaks off contact with Skywise so he can help Dewshine fight in the great battle.  The younger generation has a right to call on the elder.  I knew a girl who would be attending TJS, at considerable cost, as a newbie.  She had never shown performance at a big live show, yet had wanted to for a long time.  She had visited me, we had corresponded, and we were good friends across time and countries.  Why shouldn't I lend her some of my props and tack and horses??   Such a wealth I had accumulated over the years...!  At the very least, my tack itself could attend the show...
(I knew of at least one piece of my tack which would be there, in the hands of an experienced old performance pro.  So Bobbie's case was not my only; but it held the lion's share.)
The idea would not have worked had I been less communicative with or less interested in the individual... or had I thought she would not value it sufficiently.
But she said yes.

A long series of emails and pictures between us gradually narrowed down the choices.  It is quite challenging to cobble together a show string using somebody else's unseen horses!  That's where I started:  I asked what she had.  One Roxy in bay and one standing black Arab resin, plus a smaller size resin pony, became my starting point.  Pile on them my own strengths:  Parade, Western and Driving.  I wasn't quite so fired up about the abnormal classes, sad but true.  It was challenging enough researching the classlist almost as entries closed.  I tried to keep things reasonable.  How much experience, after all, did she have?
"Have you ever harnessed a horse?"  I asked.
"Once," came back the answer.
Oh, boy... 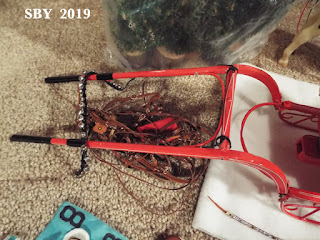 Being who I was, almost my first choice was a Parade entry.  I would let her decide whether to untack the horse it was on and transfer the saddle.  I followed that with a vehicle, about the only one I had that could be shipped without too much damage to wheels -- because it didn't have any!   It was one that was so distinctive that, if anybody stole it, it would be recognizable.  Did horses run in harness?  i.e. could Roxy be shown with my red sleigh?  Of course they did.  It was hilarious how I KNEW horses galloped while pulling sleighs but couldn't find anything like a decent photo online!  (Documentation has always been my weak point in showing.)  In the event, Bobbie somehow found a much better picture than I did, of galloping horses in harness pulling a sleigh.  That was a wonderful sign.
A minor note in this miraculous symphony was a 1983 drawing of harness instruction I'd recently had returned to me (thanks Gretchen H!), which turned out to be more useful than the trio of emails I'd hastily sent off...!  (Embryonic Guide, anybody?!)
A fourth horse was added to the list:  Rocket the Emerson.  I had one of those myself, which just strengthened our bond. 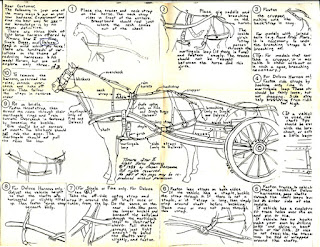 In the end I assembled a wide variety of stuff:  Two small, primitive English saddles; an ancient Race set made by a younger me; a unique purple-and-black Trad English saddle and matching bridle (and a full set of matchy matchy gear with it, boots, earnet and all); a TSII Silver Parade Saddle ON a horse; an Akhal Teke neck collar with real emeralds; a pole oxer jump; a Newberry Western roping saddle and a fancy TSII braided Western roping bridle from my own braid case; an O.F. Smoky because Bobbie had a thing about Smokys; and my famous Red Sleigh with half the Pair Russet Harness, some fleece snow, some trees, and Steve my driver doll with his equally famous white fur cloak, made from the skins of 3 ermines back in the 1980s. 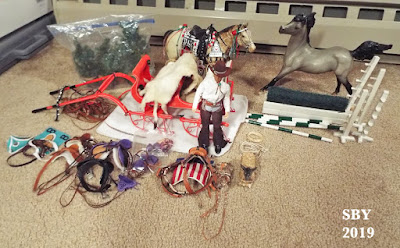 My husband said, You have to trust her.  He was so right.  I faced the possibility, remote but not zero, that I'd never see any of this again.... or that it might take years to return... or, almost as bad, that it would get broken, and we'd have to work forever to heal both spirits and stuff.  And then I hit a real pain:  insuring(!) and shipping such a large heavy box.
I had chosen a big strong box we had hanging around.  It was a Dell, with the Holstein black and white markings.  Somehow Bobbie started calling it the Cow Box.  I realized long afterwards that this same box had been to Denmark and back (for our sabbatical, 1994-1995).  Given Bobbie's Japan connection, that just made things more magically appropriate...! 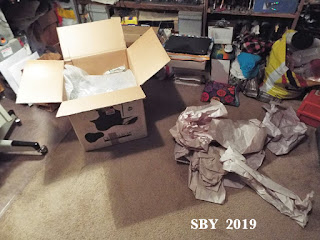 With characteristic wild glee I packed up everything I could bear to lend.  I don't recall the weight but it was huge.  Arriving at the UPS Store I belatedly realized this was really going to cost me.  The final ticket was over eighty dollars.  Even though I wasn't responsible for the return trip, I hesitated; but the clerk, someone I trusted, and my own experience of 40 years of mail order, both told me to do this -- to not take the cheap way.  This is what the Splurge Fund is for.  Was not this the measure of how much I wanted to attend?  and how I trusted her?  I swallowed hard and off it went, bearing my dreams.
And my FOMO evaporated and was gone.
I will spare you the details of how difficult the delivery connection was.  Thanks to the magic of FaceBook I watched Bobbie waiting for it for hours in person (which I hadn't expected).  I Google-mapped their neighborhood.  This level of detail about delivery is so far from my childhood memories of waiting for weeks for a parcel of model horses to arrive...!  But anticipation, I believe, is universal, down through time.  Finally the Cow box was safely delivered, and later I learned that even her husband Jeff was impressed.  (One of the factors that made this work was the willingness of the victim to post so much personally.)  The torch was passed.

On the day of The Jennifer Show I stayed close to my computer, dashing in often to update my FB feed.  Pictures were slow in starting [ahem, time zone!].  I had a small tack project for the day, which went swimmingly. 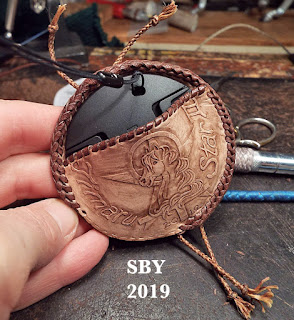 Gradually the feed improved and revealed a splendid show.  I haunted it, picking out my girl in the distance and commenting on whatever took my eye.  The Sue Rowe Hitch Wagon appeared, with a pair of OF Clydesdale Mares; I had built those very harnesses.  As the hours rolled by the fun grew.  Bobbie won big to start with, which surprised me but shouldn't've.  By evening I was seriously pleased.  It was hard to disconnect that night; I knew something special was going on.  The good news just kept on coming.  Usually a show peters out after a few group posts, but this one just kept exploding.  It was like the grandest fireworks display:  it just kept sending up rocket after rocket, climbing higher and higher.  I remember drawings by Cameron Clow, and commenting about dolls watching the show themselves, wine glasses in hand.
The next day I did not watch but took off on a family trip, long planned, to test our 2 new digital cameras (my old one had died unexpectedly).  There is a post about this drive: Visiting Colonel Drake
But that evening, and for many evenings thereafter, I peered and voyeured and watched and stared.  Elaine Lindelef took my breath away by sheer volume and quality of coverage (although there were MANY other photographers, Jennifer amoung them!).  This was the NAN photographer job that I myself had held in the past.  Elaine deserves a medal  -- it seemed to me she went above and beyond.

I found out some of what Bobbie had done.  Each shot was a fresh pleasure and surprise.  Much later there would be a Braymere post on the newbies: Viva les Novices.   The length of time spent absorbing all the fantastic details of TJS by blog was about five weeks by my count,... not counting present company!  No show I've ever heard of, not even NAN, has lasted so long.
For a brief span of time I, who have no daughter, had one then.  I had passed along the gift, as the charity organization Heifer says.  Incredibly, for one moment, I saw that the daughter had passed along the gift too.
For all the lovely surprises that my approach yielded, this is the one that brought me to tears.
My FOMO was gone.
And I just may have helped create another performance junkie.
Posted by timaru star ii at 3:40:00 PM