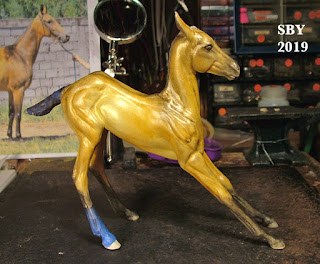 Painting the remainder of my NaMoPaiMo pony, Ambolena, naturally divides itself into three waves.  I'm going to try a separate post for each.  Titles for them could be:  Layer 7, Fixing a Shoulder Spot, Layers 8 - 9, When Ambolena Almost went Appaloosa, and Layers 10 - 11, Gilding the Lily.

Layer 7 could also easily be called How I Turned Myself into Jenn Danza for One Spot.  In order to understand this, you'd have to know that Jennifer O'Donnell Danza is reknowned throughout the hobby as a repairer of broken and damaged model horses and a fixer of paint boo-boos of every stripe.  Take a look at the point of the offside shoulder on this delicious little stretching Akhal Teke filly.  You will see a nasty brown bubble.

Layer 5 went more-or-less normally but Layer 6 went all wrong.  I was shocked and hurt. 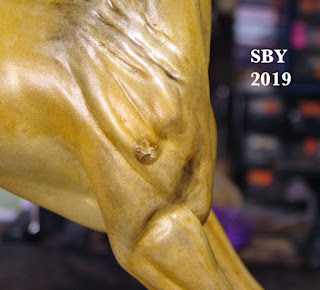 This bubble was the result of too-heavy spraying of the sealant between pastel layers.  Her withers were freshly pastelled with the darkest mix yet, and it just ran down and pooled.  Gravity wins again, my Mom would say.  I am not much practiced with spray cans, and this was proof.  I felt that the grainy darkness over the rump and face were dreadful (see above).  It was Feb 20th and I was on a roll, having had success with every layer so far.
Near side after Layer 6: 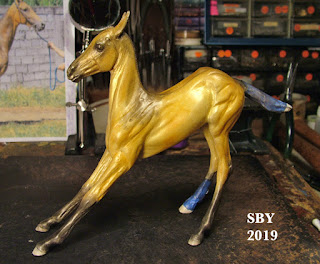 Without hardly thinking I grabbed my sandpaper and filed the bubble down to the resin.  I had recently read, in the firehose torrent of helpful ideas and wishes that is NaMoPaiMo, that step by step repair of a pastel error is the only way to cure them.  I wonder now if that wasn't from Jenn Danza herself. 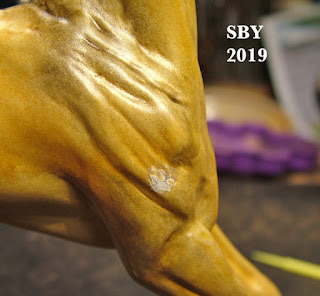 My Gesso is completely dried out, but that's not stopping me.  Wet the brush and scrub.  I used Gesso a lot during Ambolena's priming.  She is smaller than Brasenose :)  yet needed more priming.  Somehow I'm missing a shot of the primered spot  :(.  I broke out the Layer 2 powders.  I've been storing finished-with pastel powders in pill pouches.  (I did this for Brasenose.)  For working, I put the powders in what are called 'salts,' little glass dishes that are round on the inside bottom.  You'll be able to see some salts later on in her odyssey. 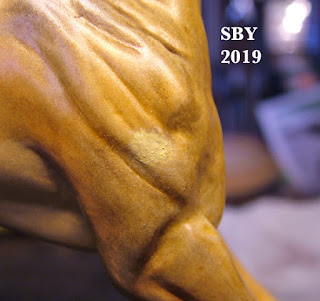 This next step, innocent as it seemed at the time, I do believe laid the groundwork for all the great changes that followed.  Because I was in a hurry, I reached for the rubbing alcohol.  This is something my tack shop keeps on hand as a matter of course.  I use it for mixing dyes and for cleaning.  I poured a little into a salt dish and dipped the brush in it and dipped the brush into the pastels, working up a paste.  And on it went.  So much faster than powdering on with a Q-tip, much thicker, and much more controllable.
My NMPM notes say I did this first with darker pastels.  "Instant paint!!  In a trice I did her points, eyes, mane and lips.  Think I'm onto something here..."   I was wanting a darker rump, following my example photo.  I mixed up a good bay color, adding in Brilliant Gold, which was darker than the Sparkle Gold I'd been using.   LESSONS LEARNT:  "Only works if pastel is powdered finely!!  So used my dapping stick." [I meant my doming punch.] "Only works with a medium-stiff brush, not the little detail ones.  You can control paste to a fine degree by buffing it w/ a wet, clean brush, so having a  paper towel handy to wipe off the brush is crucial.  When dry, buff further with a Microbrush." 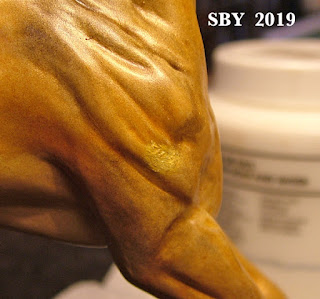 Of course, the Shoulder Spot took several applications.  Each time I smoothed the surface with a clean Microbrush when it was dry.  The above is up to Layer 4.

Something the Spot taught me was that I didn't have to go all the way to the barn to spray (seal).  I could step out onto the front porch!  Like the use of alcohol as a solvent, this simplification would grow to be an important part of my painting.  No more walking around the end of the house, unlocking the barn and getting out the flashlight if it was dark...!!   Just a mask and a latex glove on the hand that held the horse...

In this picture the  smoothing has taken away some color, but the upper part of the Spot looks very good. 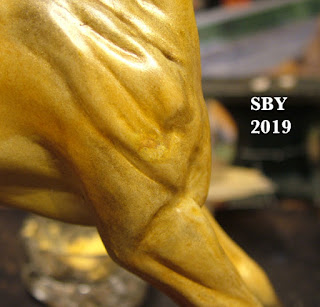 The thrill of victory was in my heart.  "It isn't perfect but it's the best I can do."  The Shoulder's lessons were being used for the rump, a subject for my next post.  "Her smaller size is counterbalanced by her more difficult color and the rabbitholes of her shoulder and rump."

Really, the only thing to do is keep trying, keep layering, with these injuries. 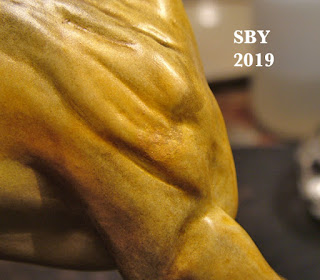 Gradually the Spot was disappearing.  Other portions were taking my attention.  When the final Layers were applied and the whole filly turned golden, the Shoulder Spot officially disappeared. 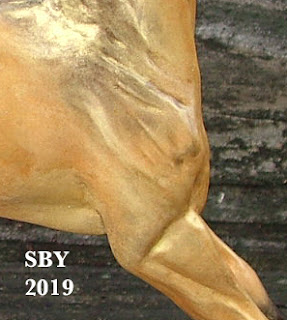 This concludes the first third of painting Ambolena Snow.  Stay tuned for the second and third installments.
And thank you to both Jennifers.