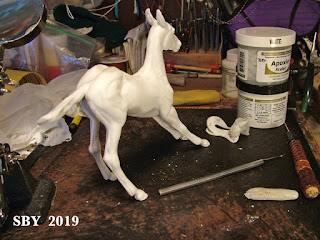 It's time again for short posts.  A filly is smaller than a stallion, and halfway through a prep job is worth only a few shots; yet I have too much to say to compress it to a FaceBook post -- as usual!

First a word on the ink wars.  After 18 days, and with no significant progress beyond those 2 plates, we called a halt in the hostilities, mostly to treat battle fatigue.  I am waiting for the arrival of 5 new pens, and new ink, before resuming.  (This is thanks to my in-house general and wargamer, who suggested a sweep flanking manuever and change of attack.  Even when I resume, the bulk of the book remains to be written and drawn, so these are mere skirmishes.)  In this interval, two things are happening:  my time in Tucson (1st wk of Feb) and NaMoPaiMo.
You could say the pens won.  Or you could say that a certain Akhal Teke filly suddenly became very interesting!

She has divots that Brasenose did not, an assortment of air bubbles too big to treat with Gesso.  However, I do recall a great deal of prepping on him too.  Little has changed.  I've spent all day happily pursuing something I could succeed in.  With her leftover Apoxie, I started on the saddle tree for a future saddle, TSII #458 (another Goehring).  You can see it above, in front of her.

Her ears were filed into more shapeliness, just like her sire's.  She received a forelock like him too. 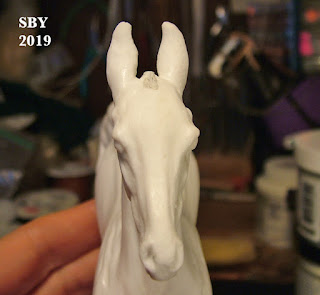 I decided to post this next picture un-Shopped, even though it is distorted from camera angle and out of focus.  Ambolena had a divot missing from the middle inside of her off hind canon tendon.  This shot makes it seem like my 'fill' is incomplete, with a sharp edge.  I'm planning to file it smooth after it's cured.  As ever thanks to A. Bilon who gave me my Apoxie. 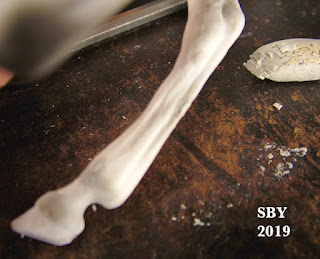 Ambolena also needed various small fixes on her hooves.  I recall I hadn't been happy about some of the heel bulbs on Brasenose; lo, his daughter has the same problem.  But this was relatively easy to mend.
I am waiting for her to cure before the first primer coat.  Also just like last time, it snowed.  :)

Happy prepping to everybody!