Restoring TSII #378 has taught me so much.  I got what I was after:  tremendous practice enhancing, preserving and updating a 23-year-old saddle.  Yet its two main lessons somehow managed to cancel each other out!  I learned heaps about restoring, replacing, strengthening and otherwise saving such old saddles; but I also learned that this work is, in cost-benefit-analysis terms at least, just not worth it.  In plain language, it would have been faster and easier to make a complete new silver parade set.  Rebuilding an old one was fascinating but in the end an exercise in indulgence.
How glad I am to be able to indulge, then.
The third main lesson this saddle taught me was the least surprising of all.  It is one I've known all along.  No matter how my brain tells me to hurry up and do a quickie -- no matter the reasons, be they solid as gold -- once the tackmaker really gets her teeth into a project, it proceeds at exactly the same speed as do all my past tack glaciers.  It sets its own pace.  Nothing less than the very best I am able to do with the skills and materials I have at the time will do --- and the devil take the clock.
Having said that, it became clear in the long course of this restoration job -- four months!  January to April -- that I was changing my approaches and trying out new things.  There was progress.  I started with the breastcollar, as it was a miniature sample of the serapes (hardest) and had something of everything.  On the breastcollar and the hip drops, I was lacing down the original silver tape, which was one layer thick and rather fragile.  In mid stride -- on the bridle -- I was replacing the tape but with only one layer.  At the end -- the skirts, fenders, taps and serapes -- I was ripping off the old tape and replacing it with two layers of fresh new tape.  Only by doubling was the tape strong enough to withstand the handling.  Lacing it down had the Mylar getting gummy with the new adhesive, so I cleaned it off with rubbing alcohol, which worked... too well.  Surpise, surprise,  I discovered rubbing alcohol would completely remove the gold of the Mylar!!  It is silver beneath... 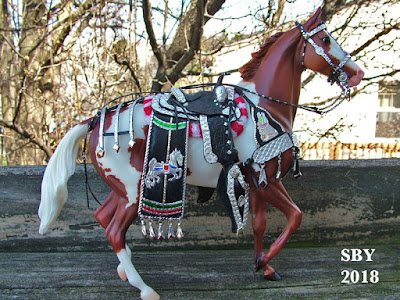 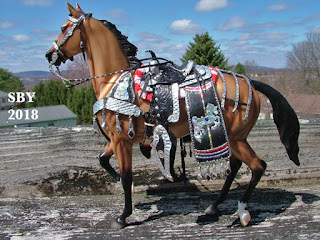 As far as the prism tape went (the colors of the figures), I wanted to retain as much of the original as possible.  In the event, the nearside serape retained two snippets:  the blue saddle and the lower blue platform edge/rounding board stripe.  (Seen above on the buckskin.)  The offside serape retained its tail and pole (seen below).  Everything else, except for the forehead ornaments, had to be replaced.  A hard-learned lesson was to back all the prism tape.  In some cases I only managed nail polish!  but the horse heads and horses were backed with sheet aluminum.  (See below.)  Complete new medallions were made, not without some mental anguish over removing the originals, which dated back to 1995.
Ultimately the original ponies, and nearly every piece of silver tape not recycled, wound up in my tack notebooks.  Below is just one sample page, showing holding them down with Scotch Tape.  The detritus is additional prism tape layers/pieces.  Some numbers:  This restoration job took 46 pages across two notebooks, N.A. XIII and XIV.  And they weren't small pages!  (That black stain?  Just a reminder of TSII #456, Star Wars.) 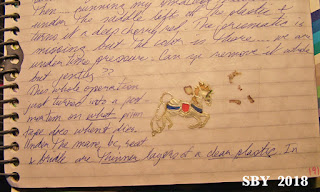 I made a fourth Needle Chisel.  It's second from right in this shot.  I'd needed that size for some time.  After this photo was taken I re-soldered and re-filed it and it is smoother and better than what is shown. 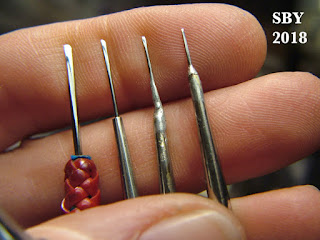 An unbelievable amount of work went into updating #378.  New buckles and rings, replacing the galvanized with stainless steel, was the least of it.  The cantle was rebraided with new Galaxy lace (the old had turned white).  The seat piece was strengthened with a tree-like lining of metal and leather and a new undercantle was made.  The gold rings (this is carousel!) on the taps were replaced and their inner edges stitched down with the smallest Mylar lacing I possessed.  In some cases the original ring silver tape was kept. 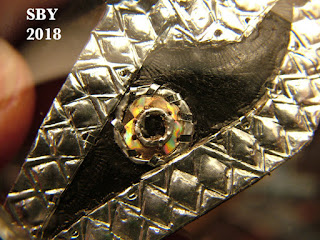 The browband was replaced.  The ferrules on the bridle were stripped of an ancient coating of glue, polished and recoated with nail polish.  Much of the hardest work was, in fact, peeling off glue and coatings of one sort or another.  I learned how in the course of the work:  Rub hard with a Q-tip dipped in rubbing alcohol, then wipe with the dry end; Kill all the Q-tips!  When the coating had softened, roll-peel it off, while continuing to dissolve it off with vinegar and more alcohol.   This photo finally captured the process; I was using my needle chisel. 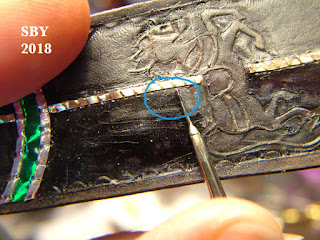 I learned that glue grabs glue and to let the roll build up to large dimensions.  Peeling is addictive.  Once clean, the leather was dyed, Lexol'd and Leather Glow'd.  Alas, after I had spent days and days stripping the serapes, I concluded that such work did not really need to be done, at least on the leather...!  Removing it from silver made sense (it turned various shades of brown and grey and was mildly gooey).  But  I could have left most of that coating... it had done a good protective job for 23 years.  I did leave it on the taps, skirts, fenders, bridle and breastcollar.

The work involved in setting the prongs of the figures/medallions is as difficult and tricky as it's always been.  It is the only way I know to make absolutely sure that silver won't fall off.
This is what the back of one of the restored serapes looks like, before edge-braiding and before its final black-leather lining is on: 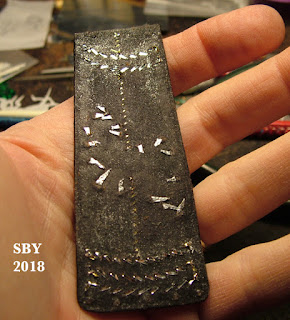 The saddle edges that previously had a thin line of stamped silver tape were now silver edge-braided with No. 12 Mylar.  Mylar tinsel is just about my hardest-to-braid material, but nothing else has got that sparkle!  It matched perfectly the carousel air and bling. 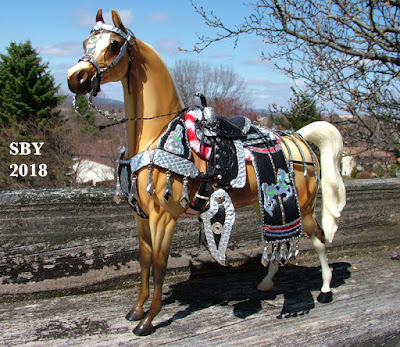 The corona blanket was very challenging, because it came at the end, when the artist's vision is just about drained (and they are looking ahead to something else!).  The original was made of pompoms, and while there is value in retaining original equipment, in this case the temptation to use advanced technology was too great.  (I.e. Melody's type of corona was SO much better!)  I found an LRB (Lorrie Batchelor?) blanket in my spares box.  Thank the god of forgotten purchases!! -- I couldn't have made a corona on my own in the time frame I had set.  With a lot of fiddling, because the corona was too big but fortunately had a fender gap, I made it smaller.  This view is of the process of the darting, having peeled back the chamois lining part way: 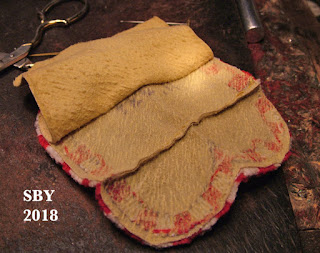 Then I darted it smaller sidewise -- too small!! -- and so had to cut some stitches.  Halfway through this tricky operation I realized leaving a hole in a middle would do no harm and gain some flexibility, which was what I wanted.  It looks bad, but all 4 seams have been stopped by dedicated stitches and the gap is hidden under the saddle.  Now the blanket is stretchy and can adapt to different backs.  The finished bottom is pure chamois, a thick but protective layer. 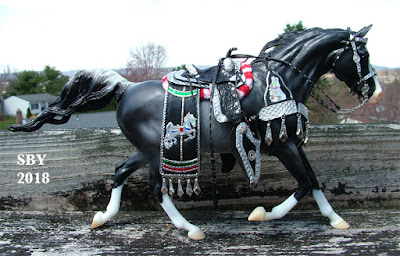 I am beyond grateful for the chance to pull out all the stops, devote myself to a lost art and go completely whole hog on a piece that might have been of interest to very few. Give me leave to do my utmost!  says Isaac Dinesen (author of Out of Africa), speaking of the artist.  Perhaps some of these restorative techniques may be of use to others dealing with old silver tape saddles.  For future TSII Parade sets, however (saving tape medallions for irregular spaces), I think I will stick with iron-ons.

Unless and until they, too, need restoring.

On to NaMoTackMo!  and beyond:  future sales pieces.