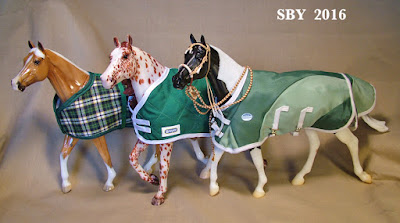 My stable blanket collection has continued to grow 'beyond rope and fence;'  there are enough new ones, acquired over 2016, to justify two posts.  This Collection 6 will be the first of the two.  I have two huge spreadsheets on my computer devoted to blankets.  One of them tracks everything Breyer ever put out (or tries to), while the other merely tracks what my herd possesses.  That's a lot! and every matte adult who wants one now has a blanket.  This has completely changed the appearance of my shelves; for so many decades my horses were bare.  But there are still many who don't, or can't, have blankets... foals and odd sizes amoung them.

This sixth chapter will also take a look at pieces that are not exactly blankets.  In the process of collecting stable blankets I've acquired adjuncts: coolers, dress sheets, duplications, non-Breyer pieces and race tack sets are some of them.  In particular, Breyer's No. 2492, Race Tack Set, will be featured.

Let's begin where Blankets 5 left off, with my collecting in January of 2016.  I had noticed, in my haunting of eBay and MH$P, something that becomes familiar to every collector of Breyer:  Factory Variations!  Here's the 1995-through-1999 Breyer Catalog picture for No. 3952, the Plaid Dress Sheet:
This handsome blanket-like cover is clearly a smart red-and-black (actually darkest-blue) plaid pattern with a leather (velcro) tab fastener at the chest and a red ribbon loop under the tail.  There is a velcro belly strap, red, beneath.  I had long wanted to have one.  I also wanted to know (somewhat less enthusiastically) why so many of them were for sale.  Generally, when you see a lot of something for sale years afterward, it means that folks weren't exactly thrilled with it.
What was its texture?  How thick and/or flexible?  What did it look like underneath?
And more interestingly:  Why were there two kinds of 3952s??

In March I acquired a 3952 that matched the catalog: 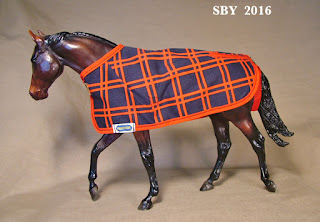 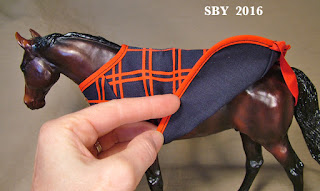 I found out these Dress Sheets were of a very stiff material.  Age had not softened it, even though it was relatively thin.  The underside was dark and rough.  I like my blankets to 'hug' the horse, to wrap around him in softly-fitting folds, but this fabric was neither huggy nor loose.  One mystery solved: I could guess why they weren't kept around.

But the other mystery was the Dress Sheet I'd picked up in February: 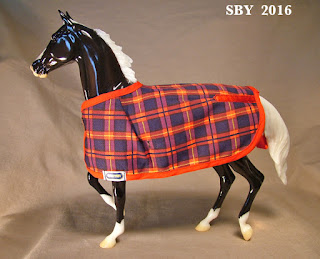 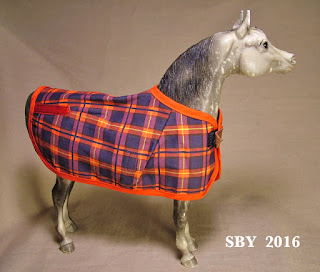 Sold to me as Breyer No. 3952!  Seen online just as much as the other!  Carrying the exact same tag, bearing the exact same leather chest tab, same tail ribbon, belly closure, and cut in the exact same pattern!  It took some time for the difference to dawn on me, which undoubtedly was what Breyer was counting on.  This version has a thin yellow stripe in the middle of its red stripes.  The plaid is different.
Underneath this blanket is the same darkest-blue surface.  But the fabric is a little softer, smoother and more flexible than the other.  Not a whole lot... but there is a detectable difference.  This sheet is lighter and more bendy.  Five years is a fair long time for a Breyer blanket to run...  I'm guessing they simply ran out of one material and substituted another.  Less likely is the thought that Breyer detected how poorly one was selling.  This remains in the realm of speculation.
For my own records I'm calling it the Yellow Stripe version, or 3952y.

In a blanket lot deal I acquired a No. 3953, the Dark Green/Black Dress Sheet: 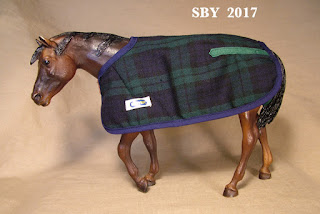 In 2014 Breyer had the bit between its teeth on company branded blankets, and came up with this jewel, the Dover Saddlery blanket. 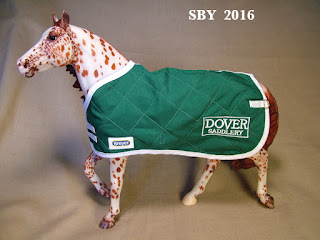 I first saw this gem on a blogspot, Alyssa Monk's Bits and Spurs (thanks for sharing Alyssa!).  Naturally it wasn't in any catalog!  As I understand it, you had to buy a certain amount, say $300.00 worth, of Breyers at the Saddlery before you could get one.  I thought I'd have a long hard hunt for this little delicacy of premium swag -- the odds were against me -- but then in March 2016 I saw it go by on eBay.  A dealer had several, still in bags.  Miracle.  It is a very nice piece, based on Breyer's classic Quilted Blanket pattern, which is big enough to fit everybody.  There is only one belly strap and only one emblem, on the near hip.  The rings near the tail are, presumably, for the owner to tie their own rump strap closure to.  I confess I leave them alone on my blankets, treating them as decoration. 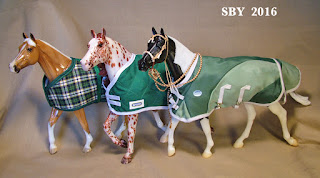 2014 was a good year for green Breyer blankets!!

In June 2016, trying (and succeeding) to get a Green WeatherBeeta for a friend, I landed a multi-blanket lot that included these: 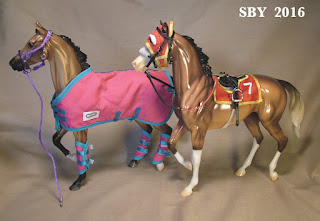 Breyer has offered several Race Tack sets over the years, starting with The Black Stallion fever in 1982.  This red and gold one is No. 2492.  It was carried from 2004 to 2008, and this is the Breyer Catalog picture for it:
Nice of them to tell you about the 'Grey horse not available!'

It's an attractive shot.  But I couldn't get the hood to fit my Lonesome Glories.
I tried and tried.  The back stuck up and the white leather (it is real leather) eye-rims blocked vision. 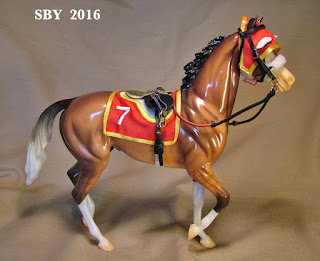 It just didn't work.  Breyer tack is usually ridiculous, but this was a new low. 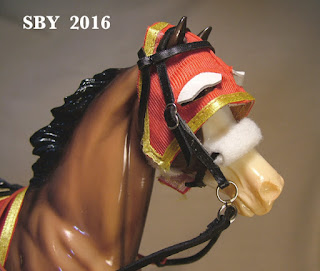 I needed a longer head, held more forward, with more distance between eye and ear.  After a frustrating time, I found one whereupon it fit a little better: 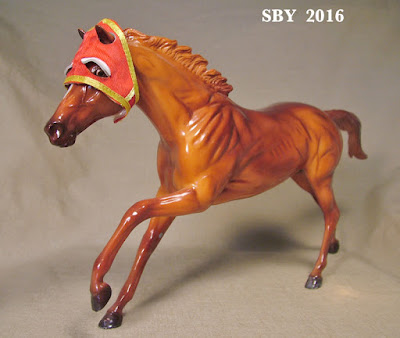 At least it's a race horse!! 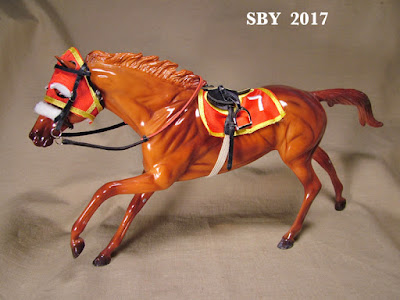 This Race Tack Set hood fits so much better on Cigar that one can't help wondering whether it was actually designed for him.  Cigar debuted in 1998, so this idea is well within possibility.

Two more blankets for Chapter 6.  Breyer was issuing Limited Edition stable blankets as early as 1996, as we know from my Tseminole Wind blanket (see Blanket Collection 3).  Here are the 1999 BreyerFest 10th Anniversary blankets, much fancier, in two colors and (apparently) in a much larger piece count.  That year the Celebration horse was Molokai.  (According to ID Your Breyer, 4200 Molokais were released, so that is my only clue as to how many blankets.)  He was then a recently introduced mold (Big Ben 1996) and my index card box has a curious card in it recording a "Molokai Blanket" as part of my bonus for participating in the Hobby Round Tables that year!!  Unfortunately I could find no such thing!  (I may have been confusing it with the Tseminole Wind blanket.)  Today, what I was seeing on eBay and other places was this: 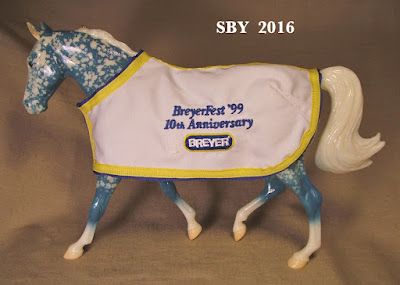 Incredibly, these two blankets seem to be the first manifestations of what would later appear as the Show Blanket Collection in 2000, 2004 and 2008 -- blankets which would set the standard of what a Breyer blanket is, in cut and pattern, up unto the present day.  Back in 1999 it was truly cutting edge, all the rage.  They have a double binding, allowing two colors, so that each blanket uses three colors in all.  The material is heavy, thick and smooth, a polyester type fabric which lends itself beautifully to the embroidery and logos.  Later, with the Show Blanket Collection, Breyer would add fancy rump darts.  These early ones had merely a self-color slanted dart.  The pattern fit many models well, although the fairly narrow neck opening would be troublesome and the long back would wrinkle up on some.  The front is entirely velcro closure - an extravagance of velcro, very easy to use - and there is a belly ribbon, non-adjustable, of velcro.

It took me some time to find these 2 blankets; they are quite rare by now, especially the blue version.  My white one arrived in Feb of 2016 and it had a large purplish stain on the back.  I spent a morning getting rid of the stain.  Rubbing alcohol and patience finally did the trick.  Bizarre as it sounds, I am convinced the stain was caused by grape candy.  : )

In future posts I hope to catch up on the Blankets, showcase other tack artists and recently acquired saddles, tell curious model horse tales and share more tackmaking.  As ever, thanks for your patience. Enjoy!