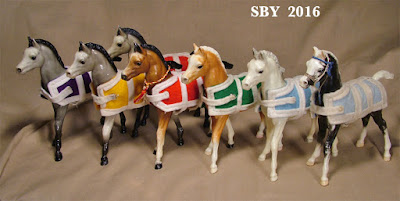 My fifth post on Stable Blankets features felt foal blankets.  I made these in the late 1970s and they have gone a long way towards solving my CollectAs blanket problems!  Way way back when these blankets were made, my herd had only the five colors of FAFs.  I believe that the extra blankets were made for Running Foals, of which my sister had a couple.  My extra App FAFs appeared 11 years and 18 years later, respectively.

These felt blankets were made by me between 1973 at the earliest (the year Breyer introduced their felt blanket kit)(see below) and 1983 at the latest, a year after I graduated from college.  I certainly remember learning how to sew, on a Kenmore sewing machine (new in 1966), making these.  Velcro was a new and rare thing; all the snaps were sewn by hand.  The pile of blankets has been stuffed away all these years (33 to 43 years depending!), along with many old costumes, coolers, and other toy horse goodies. 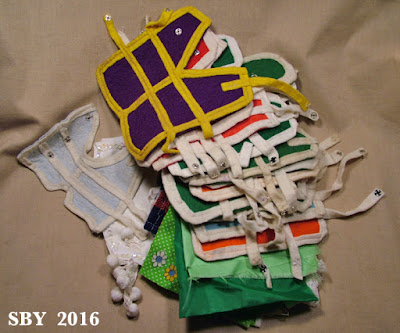 Speaking of old costumes, let's take a closer look at the one with the white pom-poms, glimpsed at the lower left.  It was made for this mare: 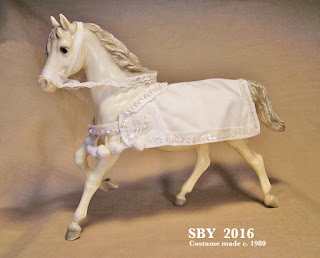 I'm not sure if this 'bridle' goes with this costume, but I do recall hand-sewing every one of those sequins... pearl-colored, similar to what we would call today "AB" or Aurora Borealis.  In person you can see a faceted jewel (glass) sewn into the center of the breastband.

When I bethought myself of the possibility of CollectA-size blankets in this ancient treasure trove and dug them out, I began remembering that the colors had significance.  Felt colors were assigned to individual horses, who became associated with those blankets.  Some of them have names written on them.  It's rather obvious from the above pile which colors King got to wear.  : )

Over so long a span of time, my herd's ruling hierarchy has of course changed, but there has always been a royal family.  To this day, King's son, Tesoro, the charcoal FAF, wears only light blue - the lightest of light blues.  The slightly darker light blue was assigned to his forever-girlfriend, Payasada, the white FAF.  (If you can tell these names came from Van derVeer's Hold the Rein Free, more points to you!)  Tesoro gets to permanently wear his own costume halter, made for him somewhere in the 1990s (I think).  Other ornaments (Windy's necklace) were made (by me) from floss, only for Arabians, inspired by Marguerite Henry's great classic book, King of the Wind. 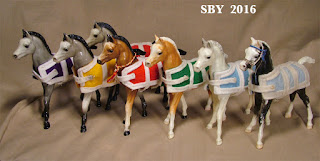 The palomino, Sun Lemon Sunflower, always wore green.  The bay, Windy, got red.  Lucky, the first Appaloosa (shown in yellow), was assigned dark blue, and here the story takes a different turn.  I found no dark blue foal felt blanket of this style.  Instead, I found two ancient foal blankets which I dimly remembered making from the dawn of time: 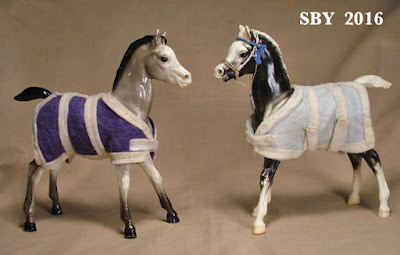 See how far down they wrap around?  The edges almost meet underneath.  These blankets look like they were made from another method, one without regulation paper; perhaps they used cloth patterns?  They're a lot more... customized.  Even then I was inventing...  I certainly remember the Breyer blanket kit that started all this.  It gave me a pattern I am sure I adapted and resized and re-used for the majority of my felt blankets.  I still have that pattern ... and that blanket. 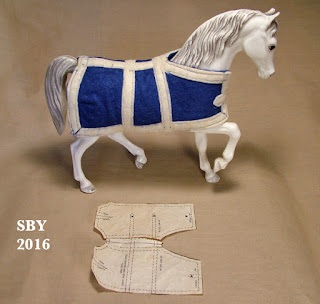 On the inside of this most ancestral of all my blankets is written the name, "Snowman."  This was the name of my sister's white FAS, no doubt influenced by the Tony Palazzo book, which we had.  This is, indeed, Janet's Snowman!  Why he has stayed, and my own white FAS, named Pine, has left over the years, is one of those painful historical observations.  Normally I don't regret selling a horse, but I do regret that one.  It happened in 1981 and was in the Denver area, so the chances of Pine still being in Colorado are somewhat better than nothing.

Kits and books!  Look where they've led just one girl...

Today, Lucky's dark blue blanket is worn by my only china Trad foal.  I named him Gillantown. This name, inspired by Gilen, is of an actual central PA town.  Gillantown gets to wear it more or less permanently, as he is fragile (already broken once - thank you Jenn Danza for repairs!) and in need of some padding, around so many plastics. 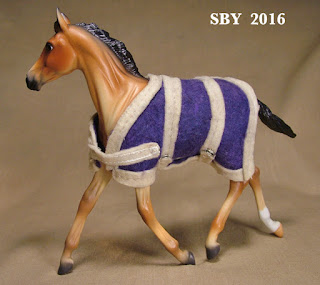 Oh the untold stories!  This blanket and one of the reds have got bands of reinforcing see-through ribbon with white glittery edges, clearly decorative, hand sewn on their straps.  Was this an attempt by a young girl to prevent the felt from stretching and shredding?  Almost certainly it was.

Up to this point my CollectAs have suffered through the most ill-fitting of blankets.  Here we have, left, a 'Blitzen' blanket, made for a Running Foal, and "Fightin Fillies" made for the Miniature Horse mold, Midnight Tango: (Thank you Helen.  Although I saw this Fillies blanket stain your horse pink, it has not marked any of mine.)
Don't you think Breyer's much-issued Classic Foal blankets would fit?  Well ... sort of ... : 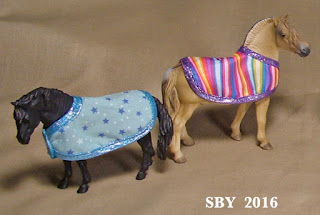 They fit the Dartmoor Pony just fine.  It's just that most of my CollectAs are not ponies!
But now, with the FAF felts, everybody is much better fitted.  The blankets are still a bit big:

Curiously I found myself assigning Tesoro's blanket to the leader of my herd (his name is Akator, from the Indiana Jones movie).  Payasada's, representing both female and second-in-command, went to my favorite married mare, Halite.  (Who Akator's wife is is currently in dispute.)  Oddly, the rest of the traditional color assignments fell to the wayside, and horses just grabbed what they liked!  I particularly like the yellow on the cremello Akhal Teke, whose name is Creamsicle.  They don't all have names, but this state cannot last forever.

Another state that cannot last is that of my CollectAs having no blankets made especially for them.  I predict, given this tackshop's long history, it will be a race between tack and blankets.  And I can only be very, very grateful I can make them both.

Speaking of grateful, Thank You to the stopped-counting-hits... : )