Sometimes you just gotta change things around.  For months I've wanted to lay boards on top of existing shelves and make more space for my Classics herd.  I had the plywood; I even had iron-on shelf-edging left over from the last time I did such a thing.  I just needed the time.  Somewhere in the last half-week of August, I finally found the time.  I measured, marked, sawed and filed with great glee; the piano bench made a fine sawhorse.  The next day I ironed on the thin wood edging, cut and filed some more, vacuumed up the sawdust, and Voila! what every model horse collector wants more of.

Unfortunately there are no 'before' pictures...!  I only have 'during' and 'after' pictures, and only a few of the 'during.'  To make matters more confusing, there are two sets of shelves here, in two different rooms.  Yes, my Classics were in two different places!  Finally, I wish to firmly emphasize that these are NOT the main horse shelves.   The Trads have their own walls... and they, too, are not all in one place.  Neither is the tack.  But that's another tale.

My earliest 'during' is this shot, of some of the Classics in what is known as the Tack Room: 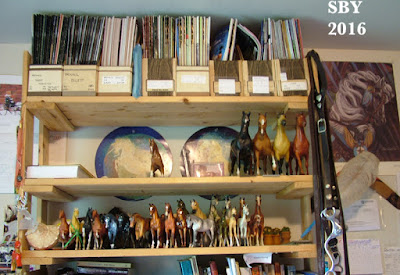 What appears empty was full of Blossoms, Breyer's line of 12 lovely flower girls.  If you are keenly up on your Breyers you will notice I'm missing one, a pink Morgan Mare.  In fact she is on loan to my husband's office.  : )  Other features to point out above are the full-scale horse bridle hanging to the right (yes, I have full scale tack in my Tack Room)(I made that bridle), the model horse calendar peeping out behind the left edge (it is 2002; it featured one of my teams), and the portrait, at back right, by Alice DiCaprio, of one of the HersheyPark carousel horses... as it happens, my favorite.

This is an 'after' shot of the same shelves: 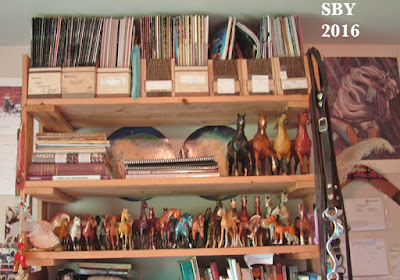 Everybody's been cleaned, the collection of Little Bits and Stone Pebbles has been somewhat rearranged, the 9" Hartlands have moved to the right (breathing a sigh of relief), and at least one extra Horse-Shaped-Object has moved in, the orange Fisher-Price pony.

This limb-moving beast dates to my childhood and I had to look him up online to determine what he was.  On the right is a Lefton china only a few years in my possession; and the little grey ponylet I have no idea what is, although he too dates back for decades and decades... to the late 70s/early 80s.
The shelves above show spare space... unbelievable thing!!  I have moved all my braid books to this rare resource... we'll see how long it lasts.  The four Trads to its right have no other place to go.  At least they're in the same room as the other Trads...

I use ribbons to line my shelves.  Yeah, somehow, after 37 years in this hobby, I've got used ribbons lying around... 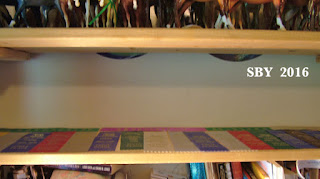 Back in the Classics room, I tried to get everybody together up on top.  To my surprise it was a tight fit.  Previously they had all been squeezed into what now, below, shows as a half-empty CD shelf.  "They all" means the ones that were not Blossoms or the royal family, the Classic Arab Family which my sister got in 1973 and I got several years later.  Dang.  I had no idea I had so many! 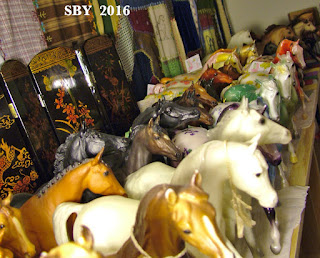 There are several sub-collections here; one of them is the Classic Racers (again, passing through my sister's hands before I got my paddypaws on them) and another is the Classic Foal Molds, seen below in their 'before' position.  In an exception to my general Trad collection, the Classic Foal conga have no parents, or rather, has them only incidentally (sorry, don't know which have & has is correct!).  For instance the Classic QH Foal has the mare and stallion but the Haflinger Foal, Mesteno the Foal and the Trotting Stock Horse Foal (these are the names Janice Cox gives them, thank you Janice for your website, I use it all the time) have no parents. 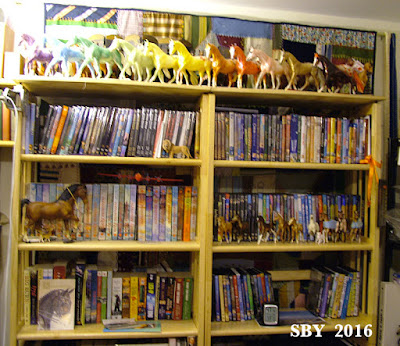 Apologies for the overexposure; this room is mostly underground.  Here's a shot of how they are now, after some more shuffling. 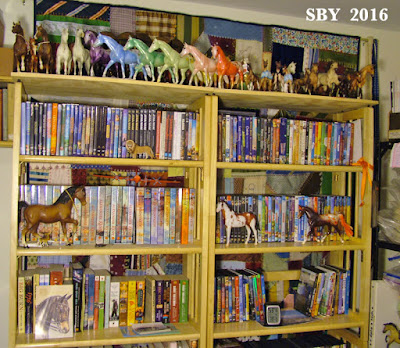 Now you can see the Royal family.  For the first time in ages, foals were reunited with their parents -- the ones that had them (Classic Arab Foal, Classic Andalusian Foal, American QH Foal).  I evolved a method to the madness, grouping the longest-in-my-possession horses on the left and most-recents on the right.  In between are clustered the Classic Racers and the Blossoms.  In a bid to give everyone some attention, I dust off an old habit, "Horse of the Day."  Two Classics are set out on the CD shelves by themselves, to eventually be exchanged with others, so that everyone might have a chance to do more than lurk.
Pongo on the left (FAS) somehow escapes all this and enjoys immunity and permanent space -- don't think I'm completely logical!!  The quilt which forms the backdrop, now seen even less! was made by my mother-in-law, Ruth Young.  The harbinger of the future, a tiny CollectA's head, can be seen in the extreme lower right.

Another case of I didn't realize I had this many.  CollectAs are so small they can stand anywhere.  Even this shot does not include every one, as there are two on the computer itself as I write.  Eh well.  Nothing stops any horse from visiting their larger brothers, and you can see that stable blankets are a shared commodity.

In other news:  A trip is slowing down my eBay efforts, but after the 12th I expect to be auctioning Ricky's Bridle.  It was great fun, and I look forward to future pieces which would be documented thoroughly and then sold.  We also will be starting on TSII #456, our next Silver Parade set.  Heaven knows I've had forever to think about it, yet it will be quite hard for me.  Stay tuned.
Posted by timaru star ii at 10:01:00 PM