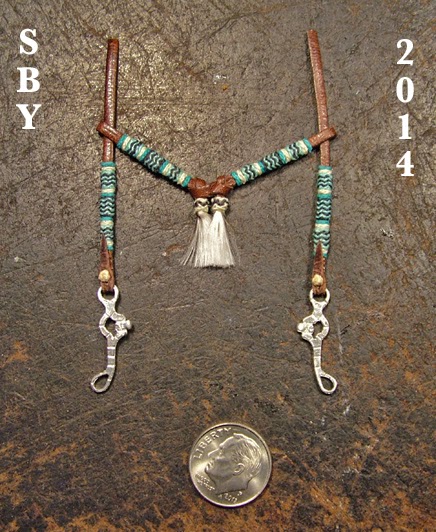 First let me thank my readers for taking me past the mile mark of ten thousand hits!!!!!   This blog has gone much further than I ever dreamed!!  Thank you, thank you all so very much.  I'll have to think of some way to celebrate this...  I feel like we've barely begun.

Next, we have made great progress on the next Lottery winner, Anya Schmidt of Germany.  You will recall a sneak peek reference from a few posts ago: 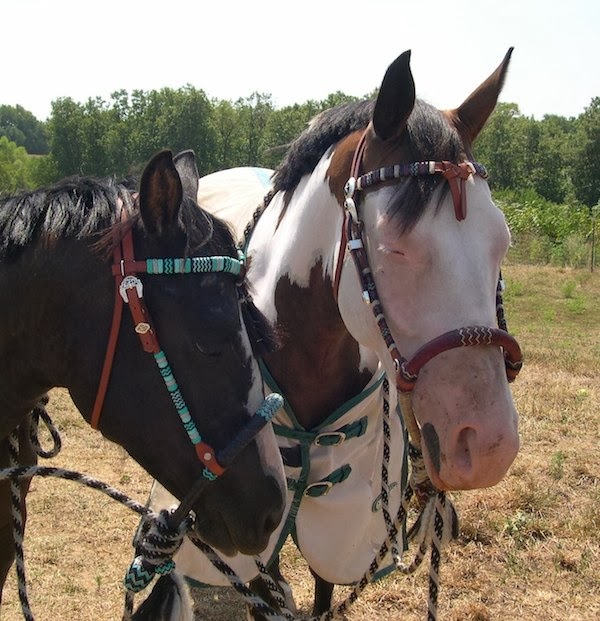 As any red-blooded model horse person would do, she chose the blue headstall.  I admit I was greatly intrigued -- read tempted!!  When I finally sat down to try it, my first few attempts came out wrong.  The turquiose thread I initially used was too dark and intense:  both bright and loud.  Also, I originally was using my dyed rawhide-color thread for the pale, non-blue color.  Another mistake:  it was too yellow and again too bright.  I sat down with a printout and changed all my colors.  Both turquoises I wound up using have to be hand-spun from smaller thread.

The trick here, as with all model horse tack, is to capture the essence of the pattern or design.  You must shrink it in such a fashion that it does not look like it's been shrunk.
Here's what I was copying: 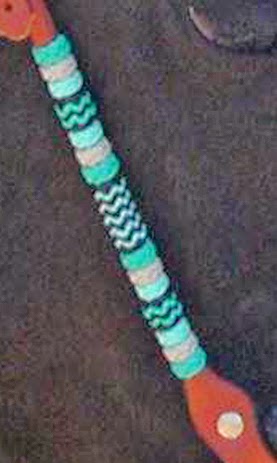 And here's what I came up with: 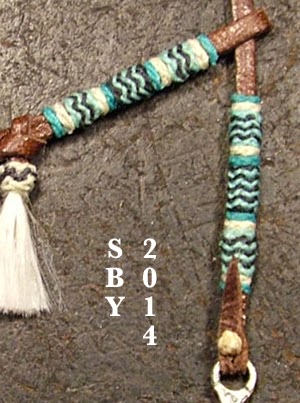 Three buttons near each end were combined into one.  That one button kept its interweaves, two for the browband and three for the cheek in the model version.  (Browbands are always shorter for me.)  This combining also left me with only two single-color buttons to make, instead of three, four times per stretch.  The long, contrasting, black-interweave buttons became fertile ground for reversing:  the two outer ones became turquoise with black stripes, while the inner one became black with turquoise stripes.  While the original has an inner button of black with 5 interweaves of turquoise,  I settled for four.  In practice, all the long buttons could be made on a foundation of 9P 4B.

It is my belief that this blue bridle was made by Lisa Bowring.
This artist, who was first brought to my attention by Lydia Ernst at BreyerFest a few years ago, made full scale braided tack using Flex lace.  The colors were fantastic, unbelievable!  I found a website, since taken down, that showed her beautiful and breathtaking bridles and breastcollars.  She had settled on 4 patterns that her customers could order.  Only four, yet what a wealth of perfected design lay within them!!  I grabbed a card and made a drawing: 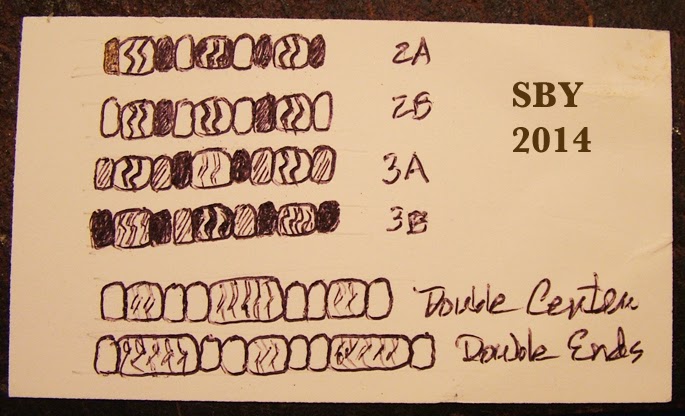 You will see that Anya's blue bridle uses a version of the "Double Center" pattern.

I have the further challenge of designing a saddle to go with this bridle!!  That will be fun...
In other news, my family is taking another canoe trip this weekend, so I'm out of town for a while again.  Return on Tuesday and take up the reins again!!
Happy Tacking!