How the Timaru Star II got its name 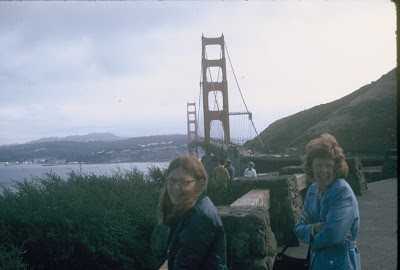 On a recent trip to Boulder, Colorado to see my parents, Mom dug up some old slides, and we all gathered round for a trip down memory lane.  I've been meaning to blog about this story for years, and now's my chance!

What you're looking at in the background is the famous Golden Gate Bridge of San Francisco.  No mystery there -- standard tourist fare.  Ah but the YEAR... is 1973!!!  The woman on the right is Jeanne Bensema, and her daughter is thirteen-year-old Susie Bensema, already smitten with things of the sea, and of the imagination. 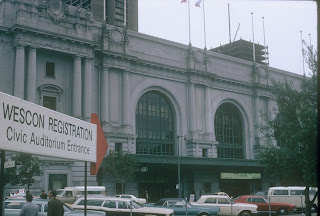 What were Boulderites doing in San Francisco?  My father, Bill Bensema, had been invited to WesCon -- an early convention for electronics and electrical engineers.  In his inimitable way he turned it into a family vacation; however, only one child came along.  Two others, a younger sister and still younger brother, had to stay behind in Boulder. 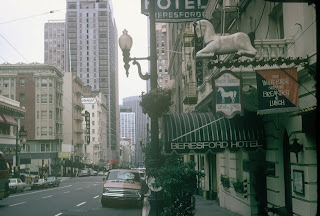 We stayed at the Beresford Hotel.  I can still remember the red carpet everywhere.  There was a tiny restaurant next door called the White Horse.  Since I was horsemad this was a brilliant stroke of serendipity. 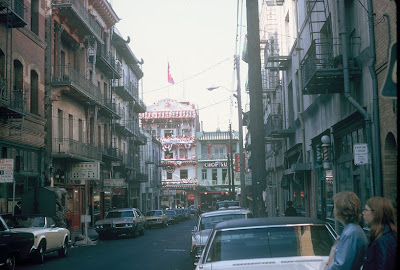 We went to Chinatown.  This was my first experience with a big city that wasn't Denver.  It was at this time I learned to eat with chopsticks. 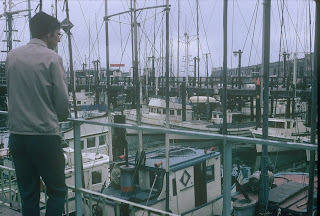 Clearly most of the pictures (usually slides back then) were taken by Dad.  However this one is of Dad, so it must have been taken by my mother. 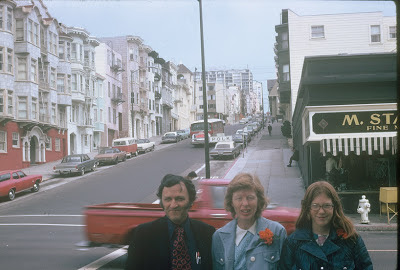 This man is not Dad, but Reverend Bob Stewart, a friend of the family we dropped in on.  Actually he was the man who married Mom and Dad, so in a very real way, if it weren't for him I wouldn't be around!
Don't you love those old fashioned cars... 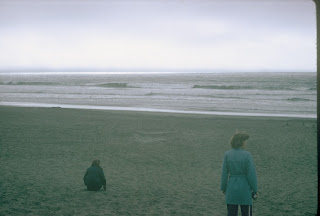 We went to the beach, of course.  For Coloradans, anything to do with the sea was quite romantic.  Dad had always had a sailing streak in him.  I think it was that which led us down to saunter along the marinas and docks. 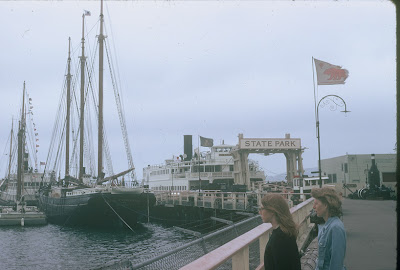 I don't recall anything particular about which park this was.  I do remember a whaling ship museum aboard an old wooden whaler named the Balclutha.  Alas, the above wooden ship is not that one.  We wandered along the docks, spellbound all three... 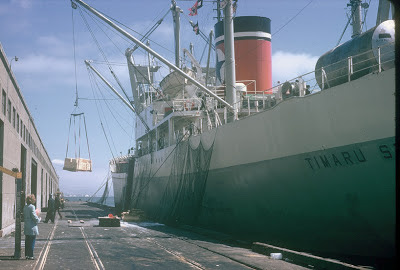 ...and what should we stumble upon but a cargo ship in the very act of unloading!
We wandered closer and watched. 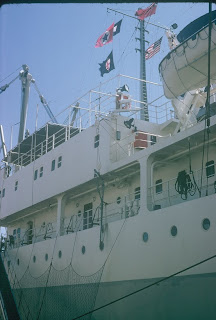 If he's interested, Dad can strike up a conversation with anyone.  I'm not sure how it happened, but he started talking with the crew, and we found out this ship was the very one which had carried our good friends and neighbors, the Walter Jones family (Walter, Carlie, Connie, Shannon and Scott) and their goods, to Christchurch New Zealand earlier that year.  That was certainly enough to capture our attention!  Connie had been my best friend before 6th grade. 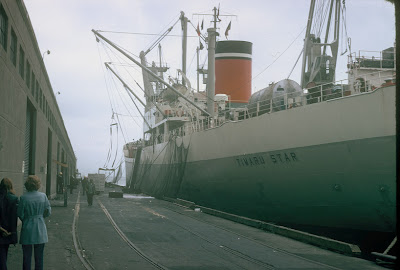 I was swept away by the romance of ships.  To be able to sail anywhere in the world... free upon the high seas...  safe...  to be doing good for others...

More than twenty years later I would find out that the White Star line named all its ships with a city name followed by the word 'star.'  Sister ships to this one included the Perth Star.  The city of Timaru is on the south side of South Island, New Zealand.  The name itself (again, it took me more than 20 years to find this out) is a Maori (Polynesian) place name for the harbor there.  Te Maru means 'safe harbor,' indicating that was the only safe place to land along the coast. 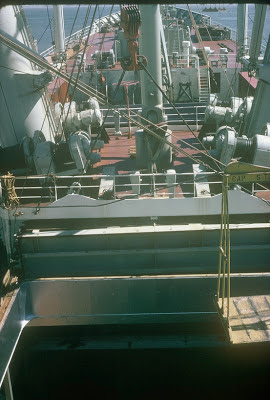 This particular slide caused my spine to chill up, because it proves Dad was actually walking on board the Timaru Star.  I have only the dimmest memory of walking on her myself, but this slide means it actually happened. 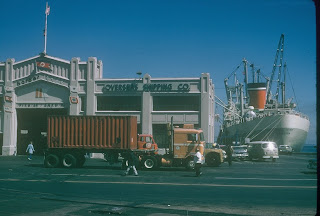 We wandered all over that day, peering into the warehouse and looking at the boats.  I don't remember much about the rest of that trip, but the die was cast.  This simple dockside encounter would start something that lasted far longer than anyone could imagine.

Sometime in the next year, influenced by a couple of other events --reading a book called "The Great Ice Ship Bear" and playing a game called When My Ship Comes In with my new best friend Gretchen Lockwood (I met her when we were both 14) -- I settled in my mind what MY ship would be like when it came in.  It would be magical, an icebreaker.  (Icebreakers took on a symbolic meaning for me: one who could conquer problems, pioneer a way through.)  It could sail anywhere; it had a model horse stable and tack shop in the hold; and it would be named after the Timaru Star.  I added a "II" or "the second" to distinguish my ship from the original real one I had seen that day in 1973.  Much later, when the time came to actually launch my model tack shop as a mail order business -- in 1979 -- I remembered that magical ship.  I wrote short stories about her, and one of them was published in Just About Horses in 1983.
But that's another story.

And so was born the TSII.  No one could have foreseen that a schoolchild's imagination would last longer than an iron cargo ship.  The Timaru Star was scrapped in the mid-1980s.  Just about the time my tackshop was getting off the ground.  (I like to think her spirit passed into it.)  To my surprise, a second Timaru Star was built in the 2000s, and it is sailing today -- a supertanker based out of Hong Kong.  Why did they keep the name alive?  I have no idea, we don't know for sure... but I like to think my little tack shop had something to do with it.. a subliminal influence, perhaps.  By then the Web was up and running, and my ideas and use of the name would appear in any search engine.

Who can say.  One thing's for sure.  I will always love ships and sailing, always have a romance with the sea, and always respect the power of imagination.