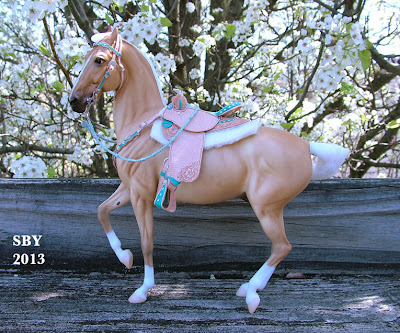 It's amazing how I seem to have a backlog of blog subjects right before I go into a long period of no posts.  Forgive me.  I promised to post on this fantastic Gaming Saddle when I got it, and I've been enjoying it ever since it arrived.
This beauty is none other than the Aqua Gaming Set made by Shannon Granger of Riversong Saddlery!

When I saw it I just lusted after it.  I'd seen Shannon's work before, in the hands of other discriminating model tack collectors (y'know, if they collect model tack they must be discriminating!) and admired her sense of proportion.  Many model saddles look like lumps.  A few manage to look like miniatures.  Detail is king, and a good part of that detail, besides crisp edges, beautiful tooling and correct hardware, is proportion:  getting the sizes of the parts right, and their relation to one another.  Shannon's saddles really attain that much-desired description:  "it looks like a real saddle only smaller."  My own saddles have not always done this. 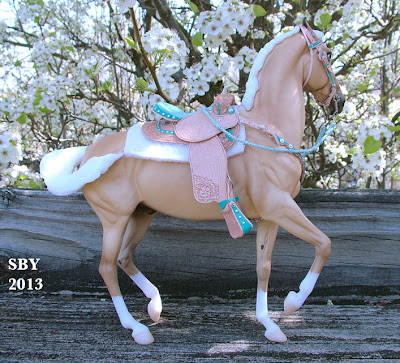 For one thing, at first I thought the horn was too small.  But then I realized real saddles have these little horns.  My own model saddles just have large horns, something probably from pride as much as skill.  (Makes you reflect upon the large-headed big-eyed baby phenomenon.)

I decided I had to have the Aqua Set, though with some trepidation.  Surely others would want this just as much as I.  The way color was intregrated into the set was something I can really appreciate, executed with dash and verve: not too much, not too little.  I was in a circumstance where I wasn't making much tack, so I chose to collect instead.  Difficult choice, but I've always wanted a Granger.  I could afford only one.  When the set was actually in my hands, I spotted a tiny error: the flower centers on the front corners shouldn't have been painted blue.  But then I started thinking about the Navajo injunction against perfection in handiwork.  They believed perfection was an affront to the spirits.  If Shannon had painted every center it would be too gaudy.  Imperfect?  Fine by me.

This third shot is a lesson in PhotoShop.  Even though I took out a great deal of blue in the first two pix, I didn't take enough. 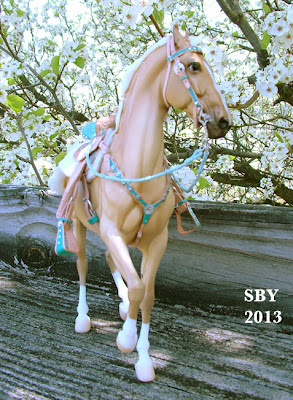 This angle shows how green everything really is:  the great Gallery Pear tree next to our house is blooming.  Oh it is grand to be outside shooting in the old place on the railings once again!  This tree has been the backdrop to most of my shots since we got the house in 1993.

Embarrassingly, the horse doesn't have a name.  I'm taking her (mine's a her) with me to Colorado and points west.  Maybe she'll find her destiny.  Certainly I'll work on getting a better blanket!  I tried this set on everybody, but a plain white pad and this horse worked the best by far.

More than half my tack collection is other people's tack.   What's really interesting is that this color combination on a Western saddle, natural undyed paired with a turquoise or aqua seat, is already represented in my collection.  It must be one of those things, like cranberries with white chocolate. Here is my Susan Taylor gaming saddle, one of two Taylors I own. 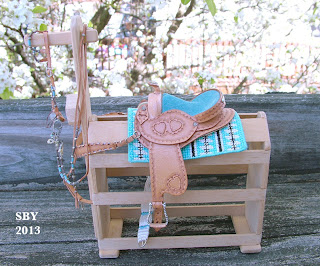 I commissioned it from her in 2002.  The bridle is from Donna Looman.  When I saw those little turquoise tube beads I leapt.  The blanket here is by me, specifically for this set.

Also I have made, myself, at least one saddle in this color combo, TSII #416, back in 2000.  It was built for Elizabeth Bouras.  Today it is in the hands of (I think) Colette Robertson. 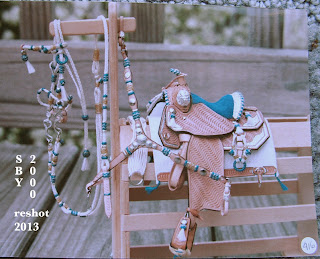 This is, of course, a digital photo of a film photo.  That's my carpet behind the top corner.   Yes, I have a scanner, but it's been unused for many years; I'd have to seriously sit down with it and my computer guru.   I dragged this photo out of my scrapbooks.  I have scads of scrapbooks (yes, that is the correct term).  Only time will tell whether they'll ever get published.