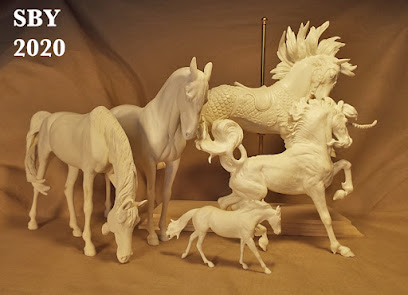 Five equines, four sculptors, three real contenders;  toying with two colors, choosing one winner.  Is it ever too early to be trying to decide which victim I'll attempt to paint for NMPM?!  In theory any time is right!  But there are much deeper questions.  It isn't exactly easy turning the age I did, this year of all years.   IF I choose to paint (and it is not a given!), this post shows part of my decision process.

Decisions, decisions.  Why are most of the colors in my imagination roan?  Is that the next level of difficulty for this artist?  Am I ready for an action model, now that I've had 3 years of standing (well, almost standing!) ones?  You waited a year for Orion!  Didn't you want something different, something unusual, which is why you got him in the first place?  But others are even more unusual...

This shot shows Orlik as very similar to Brasenose.  Orlik's legs are thicker and his butt is a little longer behind.  That mane!  Margarita painted him in dapple grey, I saw it and, god help me, I was smitten. 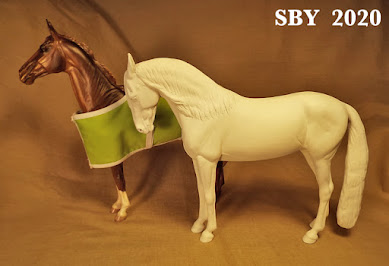 I still can't figure out whether it was the perfection of that color on that model or whether it was my long-held detestation of grey finally revolting on me.  Unplowed fields!
Grey is a perfectly good color for a driving horse (for an Orlov Trotter, classic!) and it is also a perfect next-step-up in terms of my painting skill.  (Following the She Moved To Texas blog, with its grey horse, didn't hurt... :)  But even if I don't choose grey, he'd look fantastic as a chestnut,...  or a bay,...  or a roan...
{Editor's Note.  I'm putting this picture here again in an attempt to find out whether Blogger really does pick the Fourth picture for its thumbnail.  Ever since Halloween, Blogger has been unpredictably and freakishly Not picking the first picture, despite years of doing so.  No amount of web research has given me answers.} {P.S. It worked!!  :)} 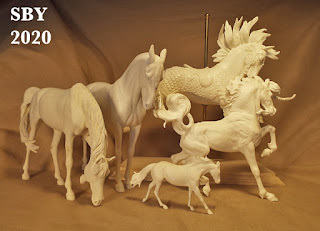 For years I've been slowly narrowing down on a color for this girl, Sarah Rose's Moxie. 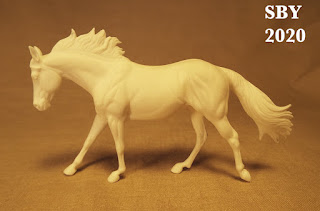 I finally found it.  Does that mean she's next?

Not 5 minutes after I took Moxie's above picture, she effectively removed herself from the running by breaking the near hind.  :(  I can mend it,... I think,... but oh so much more work.  (I'd put her back in her dust bag, but I was moving too fast and carelessly with a slippery, fragile package.  I lost grip and she fell to the carpet.  Unlike Breyers, resins don't bounce.)

I named my Hillingar after a word found in Mary O'Hara's biography (yes, that's THE Mary O'Hara, of My Friend Flicka).  The name Shinar referred, in Mary's mind, to the country you went to when you were swept away by imagination and books and where all things were new and shining; the magical place children can get to if they concentrate hard enough.  (Compare Ken looking at the ducks in My Friend Flicka.)  I found it perfect for a unicorn.

Unlike all the others in my 5, I have long known what color Shinar wanted to be.  This is both strange and not strange.  (Think emerald dragon.)  Also unlike the others, I have a clear idea about his fate.  Though he's tempting, I must honestly confess:  I am not good enough yet.  He demands more than I have right now.  I'm OK with that.  It's a relief.

Down to three.  But there are yet more standing in line, a second tier of victims.  Three (possibly 4) horses are eager to rise up behind the 5 (I am reminded of standbys on airlines).  Left to right:  Little Lone Star by Rose, Denderah by Gerhardt, and Rocket/Alzucar. 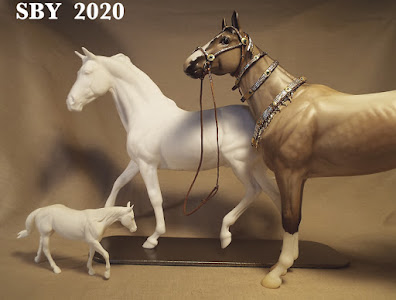 The 'possibly 4th' is Brasenose, who has been hiding a painful secret.  Remember that I often stand horses near me on the computer,... and how tippy he can be, only I know... 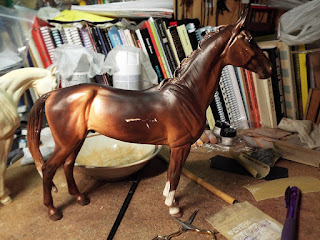 If I am stuck and can't move, this is a good place to start budging.  NOW is the time to repair Brasenose and (almost in the same breath) to repaint Alzucar/Rocket.  Give that dishwater-doeskin some real black points and a golden metallic body overlay:  here, at least, is a color not roan!  Here is a 6th horse, a Teke still, and connected to your standing-Russian-horse habit,... but easier.  In theory.

What bothers me is the amount of unpreparedness,... and my inability to stick to a large project.  Not just prepping - though that is huge.  Not just choosing a color -- though that is huge too.  The question goes even deeper:  Is this the model horse project I wish to devote my precious time to?  What about the book?  and its attendant braidwork pieces?  Apprentice potential...  What about B's harness, committed to now, and every other harness, about to rise up from their fallow-&-now-fertile field??  I can make a connection between the need to get the ink pens working for the book -- and the black points on Alzucar/Rocket,... and another blackpoint who needs repair, my CopperFox Marble's tail, which flaked.  Psychically, practically, Brasenose needs doing, clearly first.

After that, it's a contest between Orlik and Ziggy.

Why doesn't Ziggy have a name?  (What's wrong with Stardust?!)  Orlik is sweet faced, familiar; he would present a safe place for a different, possibly difficult color.  I love a driving horse.  Yet Ziggy is a throwback to an earlier, older and oh-so-happy addiction, the Ragtime Carousel glory of a historical world, one I've long observed and researched, and read about.  There are so many connections to ragtime and so much of my own history here,... 1987 to the middle 90s, to start with.  Scrapbooks, photos, models, pictures books trips art calendars childhood memories!  The list is endless.  Oh he is completely undecided as far as color!  But does it matter!!  He leads to Shinar if he succeeds.  Maybe even to Rogallo, my full scale carousel horse, (who does have his color chosen, ever since I got him in 1991)... That is a dream beyond all possibilities,... but no crazier than Denderah,... or any other unfinished. 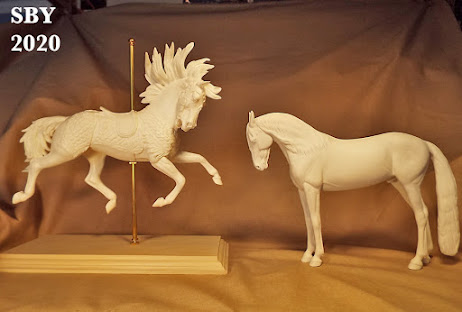 I see these two as essentially two halves of my own personality.  One is gentle and kind and the other is barbarically wild.  Both are necessary.  Ideally, then, I should do both. 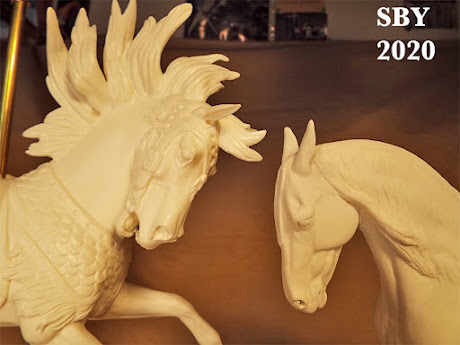 we're down to two.