My first race, in 2016, I was wearing long pants, a long-sleeved shirt, a broad brim hat, and carrying binoculars and a backpack!!!  I sure have learned a lot since then.  That first BreyerFest 5k turned in a time of around an hour.  It is a wonder I kept running.
In 2017 I turned in a 45 minute run (45:01) and we still have the phone answering-machine message I left, total squeal excitement.  :)  In 2018 I did it in 42:31.  In 2019 I made 44:11.  Again alas, this year I don't have the tech (or didn't bother) to time the seconds.  I'm basing those 20 seonds on what I glimpsed of my watch.
I ran past a few dog walkers and one old man walking.  No hat, no sunglasses, no sun lotion, no water (!) and no gloves.   I don't do that much thinking while running, although I do identify with the great running breeds:  Thoroughbreds, Akhal Tekes.  Wolves. 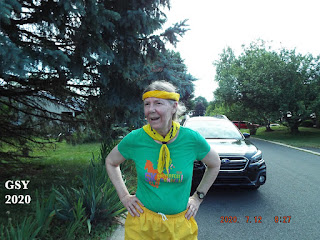 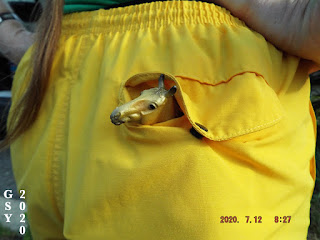