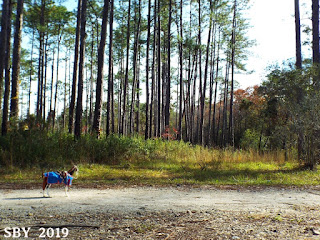 We were down in Florida over Thanksgiving.  The main horse with me was Palatlakaha, my Emerson.  I took pictures of him at a couple of places; one was near Fort Gadsden and the other was the High Bluff East tract of Tate's Hell.  These are both in the panhandle of the state, near the city of Apalachicola.  This city happens to be one of my family's favorite FL spots.  We have been there many times before, but a hurricane did great damage to the area and we wanted to wait until things healed up some.  I am pleased to report that very little sign of wreckage remains.  (Unless you count the way trash beer bottles floated inside bushes, but that's another story...!)

So here is Palatlakaha, wearing his beautiful Nichelle Jones blanket at first.  This is what we saw when we drove down the road to Fort Gadsden.  The place was closed.  We had to content ourselves with the forest on either side of the road.
The weather was beautiful and there was nobody around.  We were mainly birding and looking for little flowers for my husband to shoot.  As I recall, we were successful, and got in a good hike.

Next day, we took a hike at High Bluff East.  There is also a West, which we've done in the past.  This time I had more horses, more time and yes, more tack.  To start with, just out of the parking lot there was a fine sign which I could not resist getting into the shot.
It says "No Motorized Vehicles Allowed."

The foal is Pyr, son of Palatlakaha.  His full name is Pyr Panjshir  [peer  pan-juh-sheer].   I'm sure Pim was originally named after British cookies, but I wanted something similar yet different, and he passed through Pym rather quickly.  He landed on Pyr, probably because I was reading about Afghanistan and other central eastern countries at the time ("The Heart of War" by Kathleen McInnis) and that sounded Middle Eastern to me.  I was enchanted to discover that Afghan's Panjshir Valley was famous for its emeralds.  Great Scott!!  I was making an emerald set for one of my other Akhal Tekes.  Well that settled it.  Pyr has since had more than his share of Florida adventures, mainly because he is so small and light and easy to carry.  He is also down here on the Christmas trip.  It is unusual for a horse to qualify for back to back trips like that. 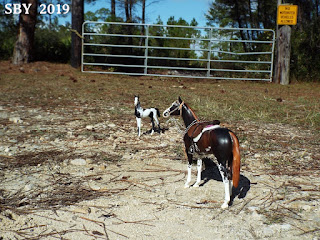 Pyr's mother is Palustris, my name for Celeste the pearl gray Lippizaner mare, aka Carina.
The foal is accompanying the ride as a dog would:  trusted to run loose, but not away.

The next view was down the trail. This English saddle was built in the 1990s from a kit released by Kim and Lenore Jacobs, alas long discontinued.  (I still have the patterns and instruction booklet though.)  I'm always amazed at how easily these horses break to ride.  One tacking-up and they're ready to go.

Palat was really hesitating.  He was giving that trail a good long hard look.
Was that crazy foal going to behave himself, or would he have to be chased? 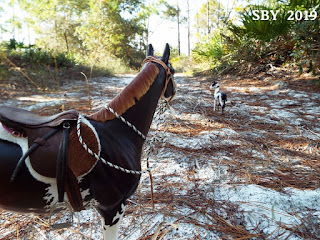 Time to switch gears a little.
This was taken on the picnic table near the parking lot.  This saddle was made by Lianne Bondurant in the 90s.  I customized it with braid-covered Rio Rondo stirrups and by doming all the conchos.  There is just something about this saddle I love -- it is one of my favorites of all my collection.  I think this is because it's so smooth.  It's truly an old working saddle in perfect scale; it just looks like it could be really good to ride.  Plus it's easy to fasten, which never hurts. 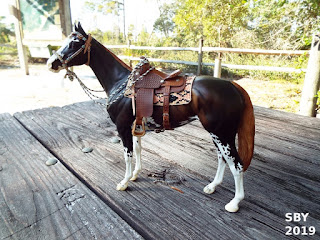 The blanket is by me.
Back to the trail. 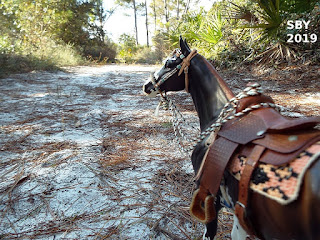 The hackamore is Fancy's.  This particular bosal hack is probably the most famous and storied of my whole tack collection.  It has 4 blog posts all to itself, of which this is the first:  Fancy's Hackamore.  All we need say now is that it's gaining back its Florida vibes and experience, replacing what was lost.  It's also dandy for breaking in new horses. 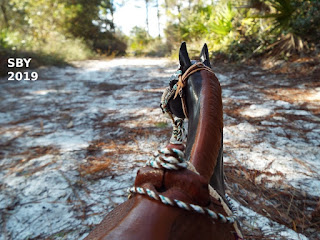 Well look who's tagging along.  Pleased to see ya, son.  Now let's get some hiking in. 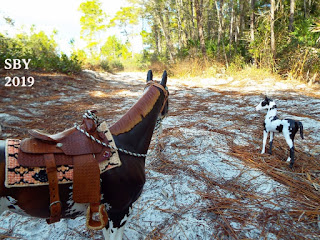