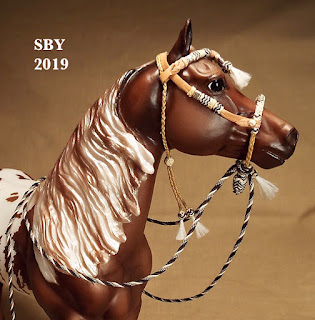 The story of this hackamore includes a year's wait and re-birth on the mecate's part, and then discovering a far prettier horse for it than I had built it for.  But that's how it goes!

This Hackamore is up for auction on Model Horse Place.  It closes Sept 13th.  My reserve is $300.00.  Here's a link: Timaru Star II Hackamore

I set out to make a stunning Bosal Hackamore for Dundee, whom I had secured at BreyerFest;  he inspired me tremendously, as models sometimes do.  I wanted to do braidwork for him.  I had a mecate on hand.  Finishing the hackamore took a month --  finishing the mecate, which had to be reworked three times, a record, actually took a year -- and I struggled with the fact that both the browband and the bosal turned out a bit large for Dundee (though still fitting him).  Casting around in the herd, I tried it on Quill.  KaBAMM!  Lovely nick!!  I had NO idea it would look so good on him!  This horse, who doesn't even have his own name yet, stole the show. 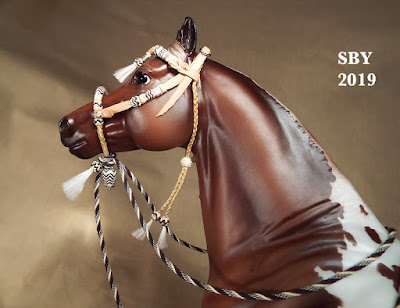 So, model peeps, I present my dilemma.  Do I apologize that this piece didn't quite come out as I intended?  Or do I rejoice that it seems to've found a most beautiful match?  Do I fret that the auction timing is overlapping with The Jennifer Show?   Or is this a chance for everybody who is not attending TJS to obtain a gorgeous piece of TSII tack?  Of course, attendees could bid anyway, if they so desired.
I'm going to try the happier path... 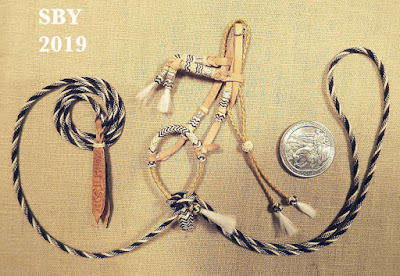 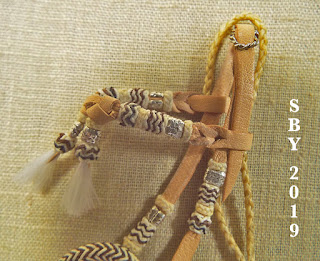 The story begins a year ago, in September of 2018, when I undertook a short order (it was a mecate) for a longtime performance shower.  We shall call her L (my vet friend is deeply into Superman, so think Lois Lane).  My first mecate turned out too short for her taste, so I made another.  (That was the year of the Roby Canyon Hackamore, and I was into mecates.)  Thus was born L1 and L2.
I sold L1 nicely (thanks Beth!) and thought the case closed.
Not so.

L put the mecate on an existing piece of headgear.  Somehow - I can guess how - it got untwisted a little, and apparently pressed the wrong way.  One strand loosened and the inner core peeped out. 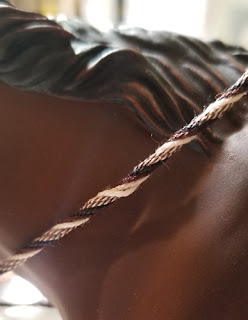 Which was bound to happen sooner or later, although this was the first time in 24 mecates that a customer had reported it.  I understand, as no one else can, how delicate these ropes are.  Untwist enough, stress them enough in a small enough spot at a certain angle, and sometimes bad things start to happen.  Literally, this was a hernia:  painful and unsightly but not serious.

Wisely, the owner decided it could only be fixed in the shop that had created it, and early in 2019 the L2 mecate came back home.  (A truly great mercy was that she didn't need it til Sept.)  For reasons I can't quite explain, I chose to make a third mecate, and L3 was born.  During its creation I learned more about preventing such hernias; 'stripping' or stroking the rope multiple times during spinning seemed to help.  The owner was happy with L3.  After BFest I turned to retightening the spin on L2.  But, alas, my attempts just made things worse, as sometimes happens.  That's how it goes.
Yes, I am hestitating to show this!  Note not signed... 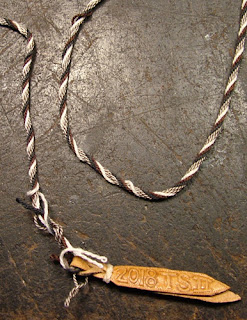 In the end I had no choice but to take off the end tassel knot, unspin the rope down to the strands (not the threads) and start again.
I thought this might make a blog post of itself: the respinning of a TSII mecate.  I took pictures of the removal of the tassel end.  But then I started getting swept away by sheer creation, and stopped shooting and just kept spinning.   That's how it goes!   L2 had also had to be respun back in 2018...  I'm so astonished the thread has held up!!  The lovely rope, 30" long, was finished Sept 1st, and as it happened, that same day brought me my new camera.  My old one had died a week previous.  What delightful timing... 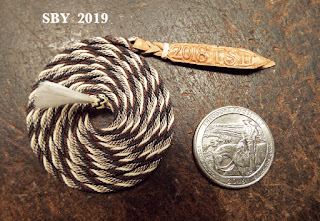 The main difference to the new L2 is the addition of a 2nd interweave in the tassel button (hard to see in this shot).  And I think it's better spun.

Now I plowed ahead with the bosal, the headstall having been finished August 17th.  I tell everyone bosals take me 3 days,... but this one took four (Sept 1 - 4).  I guess I'm getting older.

The nosebutton foundation is my standard 3 bight - god-knows-how-many parts, probably 13.  The 10 interweaves were put in in two overlapping groups of 5, one from each direction.
Almost there:  Just prior to cutting off the cores and putting in the heel concho. 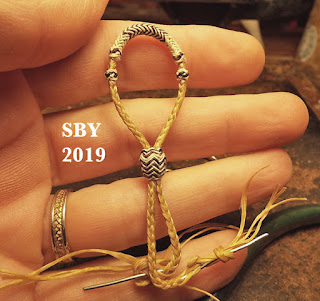 And now for the fun part.

Dundee, known as Barbados in my herd, models what was to have been just for him.  It does fit him, but I worry about that browband.  And look at the extra turns of mecate I had to take under the jaw. 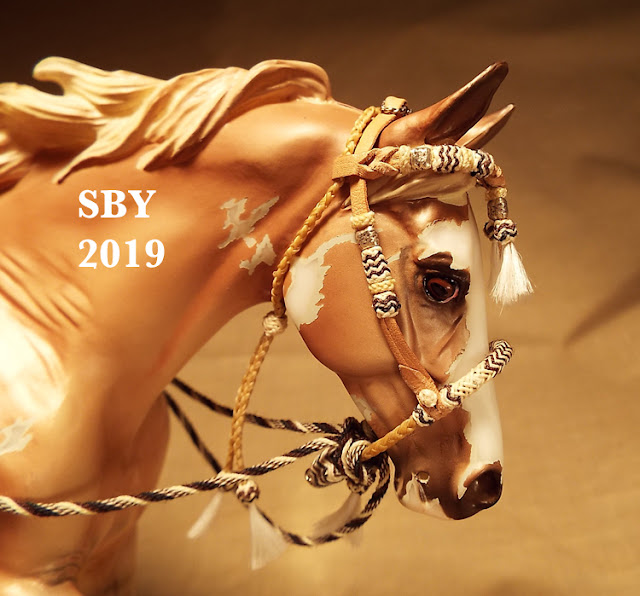 The length of mecate, on the other hand, was fine. 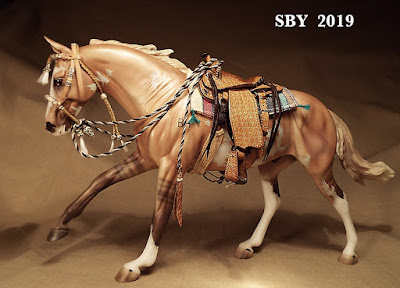 Here's another long horse that looks surprisingly good with the L2 Hackamore.  The saddle is by Evelyn Munday. 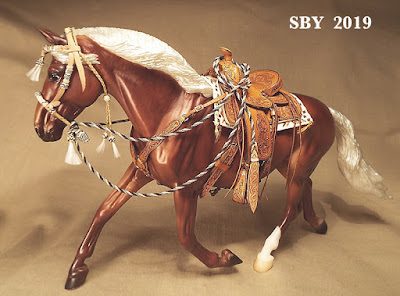 This is a nearly unique viewpoint:  Straight into the face, right beween the eyes!!  But it shows the braidwork well. 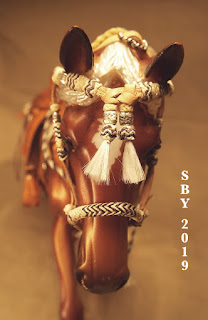 I really like this portrait.  I kind of hate to admit I didn't like this mold for a long time.  This is the first one I've owned (thanks Eleanor!). 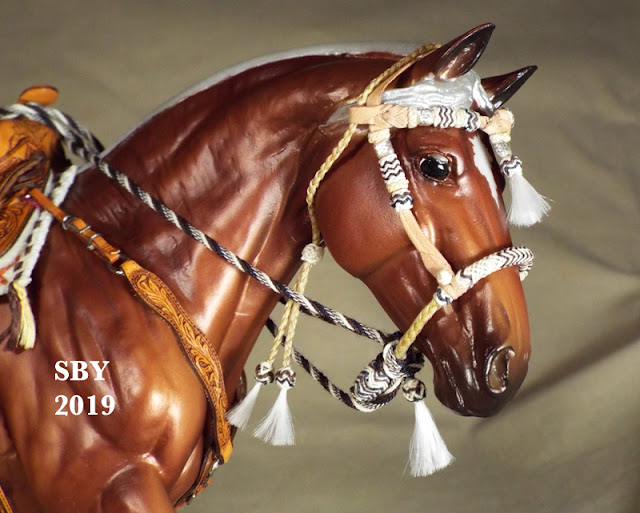 At the end, Quill, the one we started with.  The pictures don't do him justice.  The hackamore looks lovely on him. 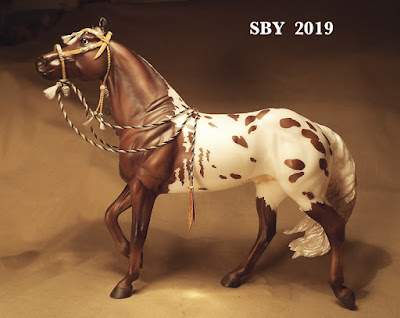 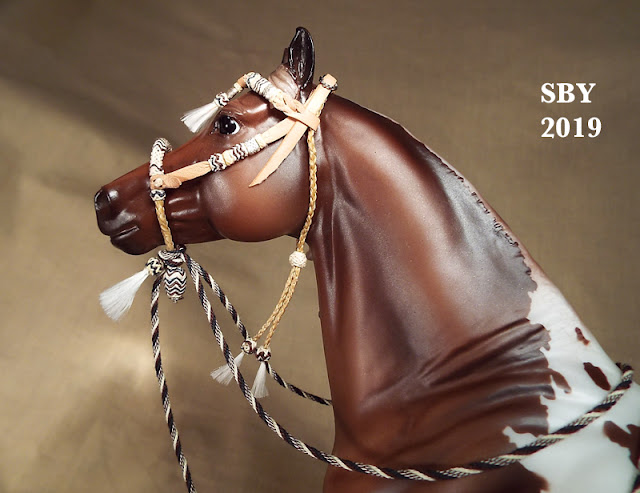 I have at least three other blog subjects pent up, 'standing at the gate shuffling their feet,' so stay tuned.